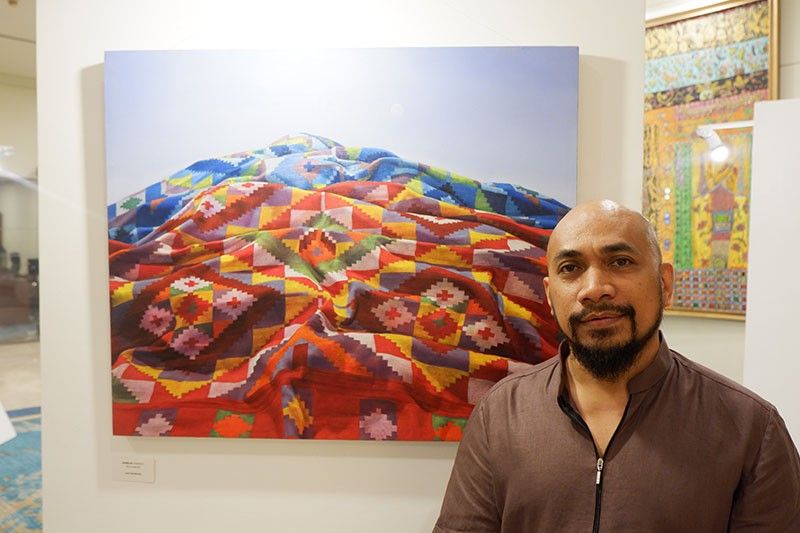 Joel Geolamen having a picture with his artwork, Kabilin. (Photo by Jinggoy Salvador) 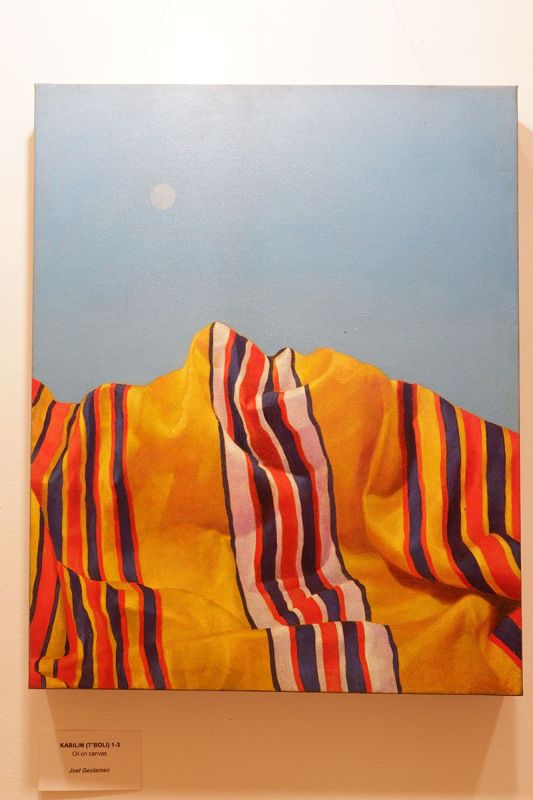 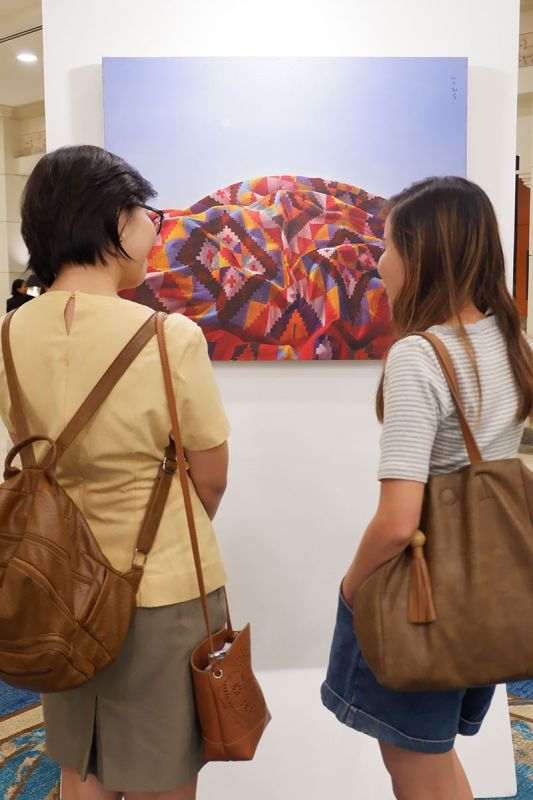 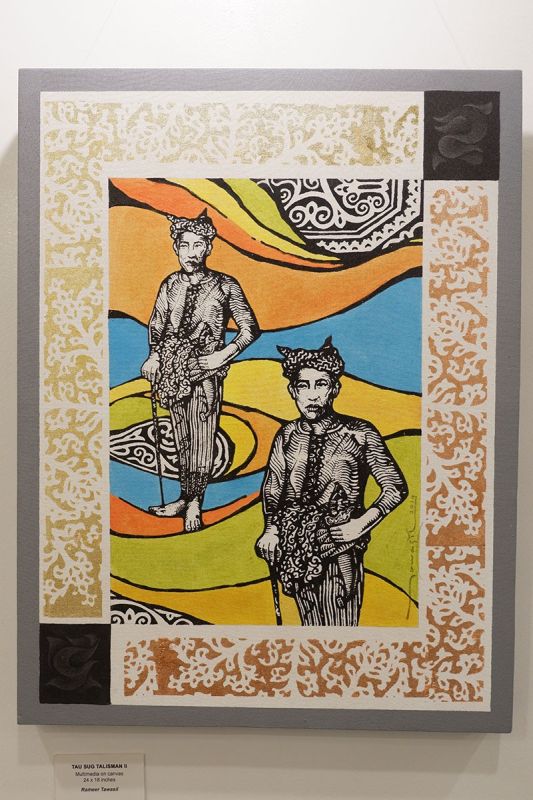 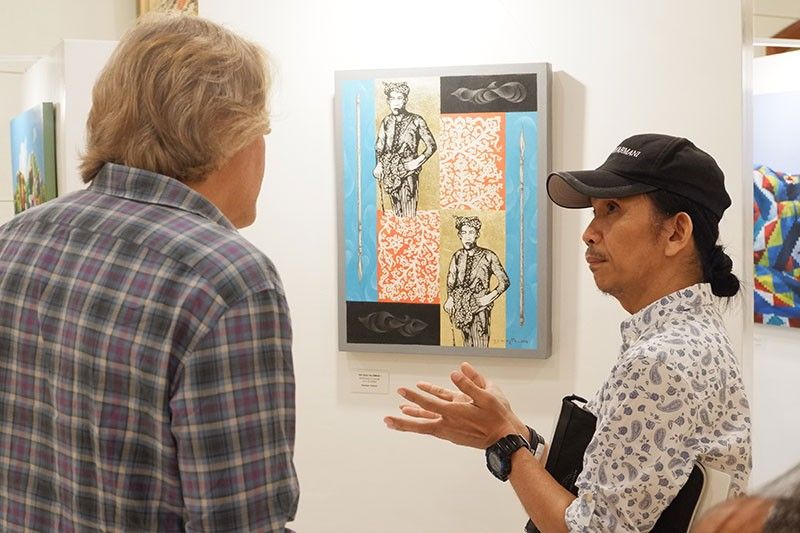 Rameer Tawasil having a conversation with a foreigner who is also into pop art paintings. (Photo by Ralph Lawrence G. Llemit)

ART exhibit appreciation is, admittedly, not everyone’s cup of tea.

While some are mainly focused on the minor aesthetics (colors, medium used, the subject, etc.). Others are “pretentiously” capturing it on their mobile phones, for the sake of fake art appreciation.

Traditional art meets a new contemporary, the digital art. While it will be a never ending debate as to which is a “legit” form of medium, both could be effective means of conveying messages, as what art is in its truest essence.

Three renowned artists from different parts of Mindanao collaborated and showcased their highly-artistic expression utilizing different mediums with a common denominator, their deepest desire to preserve cultural heritage through art.

Saudi Ahmad of Zamboanga City, Joel Geolamen of Davao del Norte, and Rameer Tawasil of Sulu, joined forces for the first time for an exhibit entitled “Tres Surs’ Treasures”, which was publicly opened on Thursday, August 15, at the Marco Polo Hotel.

The exhibit’s title, which stands for tres, a Spanish cardinal number for three; while Sur, “south” in Spanish which signifies the location of Mindanao, is a well-played word rhyme for treasure.

Treasure, in the sense that they are starting to become scarce as generations passed.

“They consider art as treasures, something that is valuable to them that is worth the share and to be passed on,” said Angely Chi, exhibit coordinator.

Apart from imparting the mediums used in their artworks, she said it is important to note that each have significant issues painted in their canvass, which also serves as a documentation and a diary of the present issues the indigenous peoples are currently facing.

“There are subject matters present in their works that is important to be see and discuss, especially now that more people are concern about local cultural heritage. This exhibit education, in a sense, explains their point of view in the cultural heritage of Mindanao,” Chi added.

As for Tawasil, Mindanao’s rich history, culture, and art is worth every bush stroke.

“There are inescapable reasons for Mindanao artist to paint: from the history, culture, arts, and social issues,” he said.

His work, Tau Sug Talisman, features a subject of an old Tausug with a barong (bladed sword) which is used as a weapon for defense against enemies.

He said his medium was a mixture of traditional and new form of art, from pencil, rendering, drawing painting, and serigraph printing.

Just like the barong, which is now used as a status symbol, the continuous decaying of the Tausug art and practices has inspired him to voice out his woes.

However, he said embracing new forms of technique in art, without disregarding their roots.

“They should keep on experimenting things. Of course, culture should be the root. Not so much truthful of the medium and subject,” Tawasil said.

While he thinks his work’s direction continues to be uncertain, he said his work, just like his paintings, will continue to be bright, strong, and bold, not only with the colors but also with his continuous stand for cultural preservation.

While for Geolamen, who learned painting first before the alphabet, art appreciation loss its worth without call to action.

His canvass entitled “Kabilin”, tackles the issue of ancestral domain faced by the Lumads in the hinterlands.

Using oil as a medium, the mountain is covered with different fabrics by different tribes.

“Issues of land grabbing is one of the issues of the Lumads, wherein it is slowly being converted as resorts,” Geolamen said.

Ahmad’s work, however, has yet to arrive in the city in the middle of the duration of the artwork.

Meanwhile, he is considered as one the country’s master visual artist who participated art dialogues in different countries.

In an ABS-CBN News article, he was first into surrealism when he started painting but he has since then developed his own unique strokes which he has dubbed “Saudism.”

His subjects are mostly joyous occasions and traditional ceremonies of the Tausug and Maranaos. His painting, entitled “Royal Wedding,” was recently chosen to be featured in Singapore.

Ahmad said in the article that he would rather paint joyful occasions of the Tausug and other Muslim tribes in watercolor than join the political debates about the Bangsamoro identity.

When asked about his Bangsamoro Organic Law (which was passed into law as Bangsamoro Basic Law), he said there are “more qualified to talk about it”.

Tres Surs’ Treasures will be open to the public unil August 31.