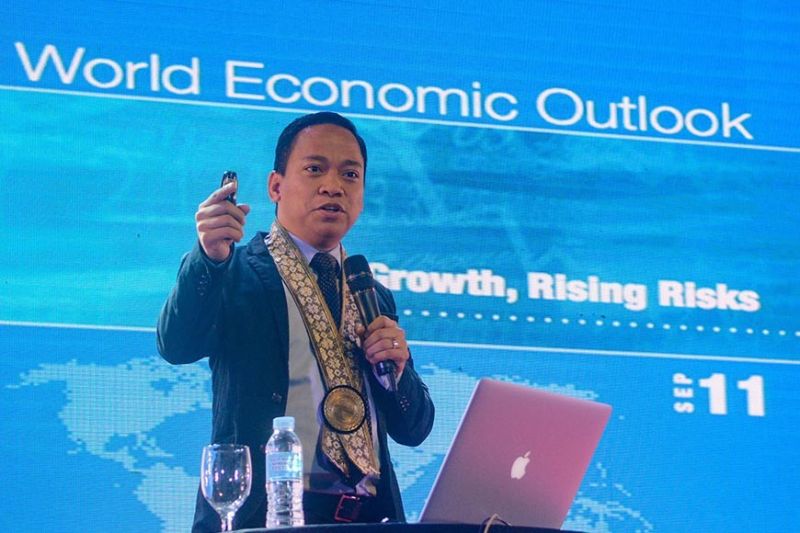 OPTIMISTIC. Economist Ronilo Balbieran expresses a bullish outlook on the Philippine economy, citing its young population as one of its advantages, during the Mandaue Business Summit 2019 hosted by the Mandaue Chamber of Commerce and Industry. (SunStar photo / Arni Aclao)

THE Philippines’ strong population of more than 100 million is driving the steady growth prospects in one of Asia’s promising economies, a senior economist said.

Ronilo Balbieran, founder and president at consulting firm Arsokos Corp., pointed out that the country’s young population is its main advantage.

The average age of Filipino citizens has stood at 23, accounting for a significant part of the nation’s workforce.

“Our population is high and we are still growing,” he said during the Mandaue Chamber of Commerce and Industry (MCCI) Business Summit 2019 on Friday, Aug. 16, 2019.

According to the World Bank, the Philippines currently has 104.9 million people, having one of the youngest human resources in Southeast Asia.

Apart from its population advantage, Balbieran also cited the country’s steady deployment of workers overseas, who have been pumping money into the local economy.

He cited the country sends an average of 6,000 people every day to other countries as overseas Filipino workers (OFWs), whose earnings are driving consumption back home.

“OFWs build the remittance industry with the latest US$3.15 billion in remittances,” he said.

Data from the Bangko Sentral ng Pilipinas showed that OFW remittances totaled $16.3 billion in the first half of 2019, up 2.9 percent from $15.8 billion recorded in the same period last year.

In terms of sources, the US posted the highest share of overall remittances in the six-month period at 36.4 percent. It was followed by Saudi Arabia, Singapore, United Arab Emirates, the UK, Japan, Canada, Hong Kong, Germany and Qatar.

Balbieran was optimistic the remittance sector would continue to drive the country’s gross domestic product, which grew 5.5 percent in the second quarter of 2019.

Moreover, the economist also projected the continued influx of new businesses, citing the potential growth of e-commerce in the country.

He noted that some multinational companies are putting up headquarters in the country.

“The biggest companies in the world are already here in the Philippines to take advantage of e-commerce,” he said.