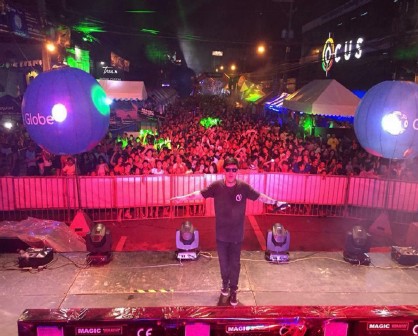 BACOLOD nightlife is pretty hype as clubs and bars all over town draw big names and big crowd. This city has tons of joints to suit different tastes of fun. I for one have my favorite hangout places depending on what day of the week and what time of the day. As a new guy I say there is not a boring night here in the city of smiles.

If, like me, you are up for some rave, it is easy to follow the underground sounds and for sure you will be led into one of the neighborhood’s best loved clubs, Rainure, located at 22nd Street, Lacson.

Last weekend I had a blast there with MC John Ledesma hyping up the crowd as everyone gets lost into the beats of DJ Eric Capili, the bar owner.

Anyway, let’s take a peek into the world of MC John.

MC John is well recognized in the local music scene as he has already performed in all the big events in the province like Dinagsa Festival, MassKara Festival, Sinulog sa Kabankalan, Manggahan Festival, and Manampula Festival.

Coached by his friend MC Joms, John started his MCing career back in 2014 with his first gig at Manangpula Festival. After that projects poured in and what started to be just a hobby became his mainline career now.

When asked why he ventured into MCing and not DJing, he said, “I love interacting with people and I guess DJing isn’t really my thing.”

MCing is no joke, and surely not as easy as it sounds. When asked what difficulties he usually encounters, he shared “It’s when I get to open the set and people are not yet hyped to dance especially in fiestas. But I always just have a positive mindset, I stay connected with my partner DJ and I just enjoy the event. Passion for the job should always be there.”

MC John is also a human beatboxer which comes in handy when DJs have technical problems during a play.

As to how open he is with collaborating, he said, “I can work with any DJ. In this music industry you really need to be versatile. I am the type of guy who likes to make friends. So even if you are new to this music world the professionalism and friendliness should always be there.

And because success is always a team effort, MC John would like to thank Dennis Cayuditan of DennisDMenaceArtistsAgency for discovering him as well as DJ Eric Capili for letting him perform every weekend at Rainure.

When asked what he does for fun, MC John shares that he plays guitar and makes songs. He also likes to do covers and combine all the sounds he makes.

There you go, let’s give it up for MC John!