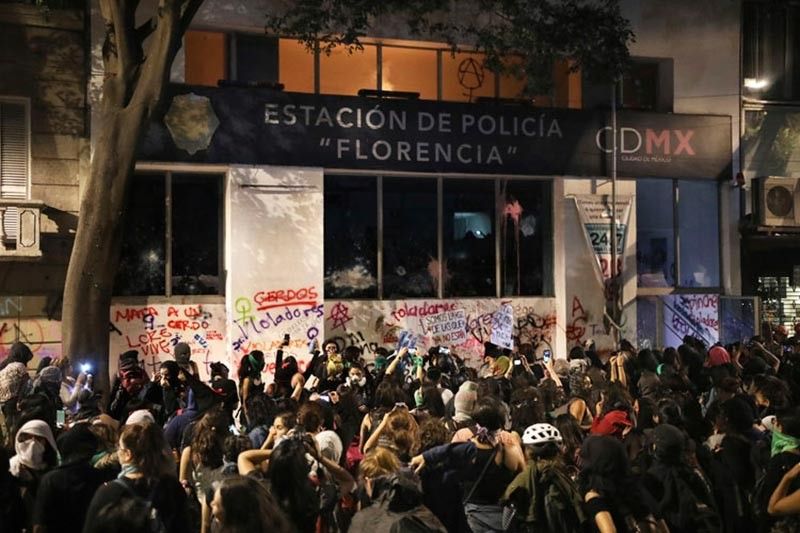 MEXICO CITY. Female demonstrators stand outside a defaced police station as they watch the second floor burn, from a fire they started, during a protest sparked by a string of alleged sexual attacks by police officers, in Mexico City, Friday, August 16, 2019. On Friday, hundreds of women demonstrated largely peacefully in downtown Mexico City with pink spray paint and smoke. But some protesters trashed the nearby bus station and a police station. This week, an auxiliary policeman was held for trial on charges he raped a young female employee at a city museum. (AP)

MEXICO CITY -- Workers erected a wooden wall around Mexico City's iconic Angel of Independence monument Saturday, August 17, after feminists defaced it with graffiti during a raucous protest over a string of alleged rapes by police.

The disorder Friday night, August 16, erupted as part of protests that arose this week over a perception that city officials were not adequately investigating the rape accusations. Both victims were teenagers. The demonstrations have become known as the "glitter protests" after marchers doused the city's police chief in pink glitter.

Hundreds of city workers spent the wee hours of the morning pressure-cleaning and painting over graffiti.

The deputy director of artistic patrimony at the National Fine Arts Institute, Dolores Martínez, said at the base of the statue that officials were assessing the damage to the Angel and other points in the capital that protesters attacked.

At the same time, Martínez added, the fine arts institute "respects freedom of speech and offers support for actions to eradicate all forms of violence against women."

Protesters wrote phrases like "They don't take care of us" and "rape state" in lime green, purple and black spray paint across the base of the Angel monument, which commemorates Mexico's independence from Spain and is often the site of celebrations by city residents.

The monument was slated for repairs at some point due to damages from the September 2017 earthquake; Martínez said that those restoration plans will be fast-tracked after the vandalism and to show "solidarity" with rape victims and feminists.

Demonstrators also painted the word "rapists" on the wall of a nearby police station and trashed a major bus station. A male television reporter was punched by another man while covering the protest.

Mexico City Mayor Claudia Sheinbaum, the first woman elected to head the city's government, said via Twitter that the attorney general's office of the metropolis will investigate and bring charges against those who attacked journalists, bystanders and public buildings.

The Associated Press witnessed some female protesters assail men during the Friday demonstration.

In a Friday statement, Sheinbaum accused the protesters of trying to provoke authorities into using force, saying "that's what they're looking for" and that "violence is not fought with violence."

The mayor invited "those who legitimately fight for the defense of human rights and the eradication of violence to help generate a climate of peace."

Protesters have called for Sheinbaum's resignation, saying she cares more about public property than women's safety. They have also criticized her choice of language, noting that words like "provocation" are sometimes deployed to blame rape victims for their own assaults.

Violence against women is a serious problem in Mexico.

Human Rights Watch says Mexican laws "do not adequately protect women and girls against domestic and sexual violence." It said in a 2019 report that provisions in Mexican law, including those that make the severity of punishments for sexual offenses contingent upon the supposed chastity of the victim, "contradict international standards."

Mexico City's culture minister, José Alfonso Suárez del Real, expressed sadness over the vandalism at the Angel monument, saying it "belongs to the Mexican people, not to the state."

The remains of 14 independence heroes rest within the monument, including those of a woman, Leona Vicario.

The monument on Reforma Avenue is a reunion point for protests as well as celebrations. Soccer fans regularly converge around the base to celebrate their teams' wins, while young girls marking their 15th birthdays — known as quinceañeras — pose for photos on the monument's base wearing outsized party dresses on weekends.

Spotting the graffiti as she passed in a stretch limo, a quinceañera celebrant in a powder blue taffeta dress gasped in horror. Another, in a voluminous burgundy gown, went ahead with her photo shoot on the grass lawn around the monument despite the wooden barricade in the background.

Art historian Mara Fragoso came to assess the damage to the Angel with conflicted feelings. She said she understands and shares the protesters' rage over violence against women, but she feels monuments should not be violated.

The Angel in many ways is a monument to women, Fragoso said. In addition to the golden female figure of an angel at the top, stoic bronze female figures are stationed at the four corners of the base.

Below the bronze figures are the words: War, Peace, Law and Justice.