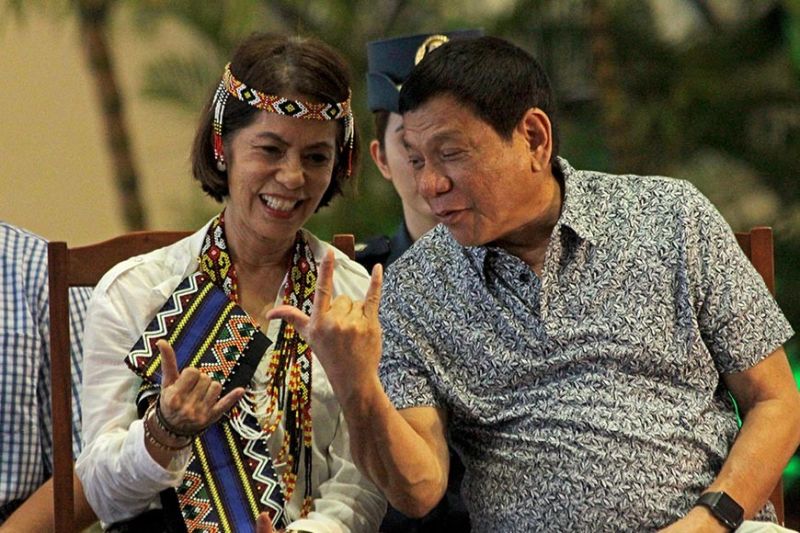 DAVAO. This file photo shows former Environment secretary Gina Lopez sharing a light moment with President Rodrigo Duterte in an event in Davao City in August 2016. Lopez passed away Monday, August 19, 2019, at the age of 65 after losing her battle with brain cancer. (Macky Lim)

ENVIRONMENTALISTS and fellow advocates mourn the loss of former Environment secretary Gina Lopez, who died Monday, August 19, at the age of 65 due to brain cancer.

Prior to her appointment as former head of the Department of Environment and Natural Resources (DENR), Lopez was the long-time chairperson of ABS-CBN Foundation Inc. (AFI).

AFI, in an official statement, said Lopez "was a champion for the environment, child protection, and the disadvantaged."

"She exemplified a life of public service to humanity with a deep desire to improve people's lives, rallied for social justice, and sought to bring hope and change to poor communities," the statement read.

Lopez founded in 1997 the country's first media-based hotline Bantay Bata 163, as a child welfare program for children at risk.

Bantay Bata 163 program manager for Mindanao Connie Casing said she founded the program on Valentine's Day because of her love for children.

"She is a compassionate boss," Casing told SunStar Davao in a phone call interview.

"Gusto niya (She wants) is you would really practice what you preach," Casing also said.

Bantay Bata also established a Children's Village here in the city on August 21, 2000. The village operated until 2013, due to financial constraints, but she said the village is eyed for reopening in the future, which the date is still undetermined.

Casing said the village had sheltered and re-integrated more than 200 children, mostly victims and survivors of abuses, while more than 1,000 children benefited from Bantay Bata's medical assistance.

Lopez was appointed as DENR secretary by President Rodrigo Duterte in 2016. However, her appointment was rejected by the Commission on Appointments after majority of the panel members voted against her appointment, as they expressed concern over her alleged arbitrary and illegal directives in the agency.

DENR-Davao Executive Director Ruth Tawantawan said the former secretary was dedicated in her position in protecting the environment.

"Former DENR Secretary Gina Lopez was undoubtedly a true environmentalist who was in her every action aimed at protecting the country's natural resources," Tawantawan said in a text message.

The regional director said Lopez was a "vibrant, confident, and strong leader".

"Her positive outlook in life and the values she uphold will always remain in the hearts of the DENR employees and communities she worked with," Tawantawan said.

Interfacing Development Interventions for Sustainability (Idis) executive director Chinkee Peliño-Golle said Lopez showed courage in battling against mining companies, which she had closed during her stint in DENR.

"She has showed how to use power in favor of the people and the environment no matter how more powerful the mining companies are," Peliño-Golle said.

She also said was able to implement environmental laws and reforms in a short period of time.

"When she was not confirmed as DENR secretary, she was disappointed but it did not kill her positive spirit," Peliño-Golle said.

"I just wish that those lives she touched when she was alive will continue what she have started," Benosa-Llorin said in a text message.

She also lauded the former DENR secretary for her advocacies for the environment despite her health condition.

Councilor Diosdado Mahipus Jr., Davao City Council committee head of environment and natural resources, said Lopez's dedication for the environment will be remembered, especially in calling the public's active participation in it.

"She will be remembered as a true eco-warrior and I hope the next generation will remember her and her commitment to protect the earth, which commitment we all should have," Mahipus said.

In a separate statement, Malacañang offered its sympathies and condolences to the Lopez family.

"News has reached the Office of the President that former Secretary of Environment and Natural Resources Regina Paz L. Lopez has passed, and it is with a heavy heart that we express our sincerest condolences to her family, relatives, friends and loved ones," he said.

"She would be greatly missed," Panelo added.

Panelo acknowledged that Lopez "took the bull by the horns when she fiercely fought powerful interests in the mining sector, as well as in industries having negative effect on our ecology."

"As we pay tribute and give honor to this warrior and advocate, we fervently pray for the Almighty to grant her eternal repose. May the perpetual light shine upon her," the Palace official said. (With Sunstar Philippines)