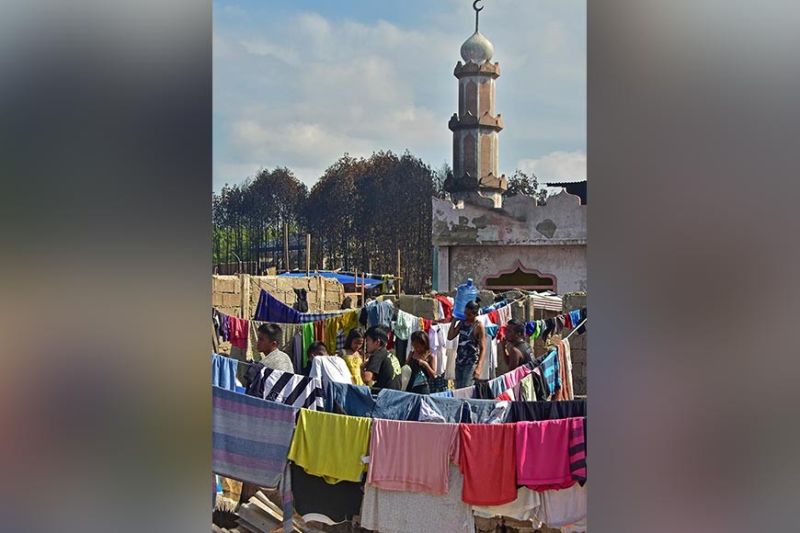 DAVAO. Residents of Barangay 23-C Isla Verde in Davao City hang their clothes dry under the sun in front of a mosque after washing these. A fire on Friday, August 16, 2019, razed 150 houses, including places of worship, with an estimated damage of P2.6 million. (Macky Lim)

IN THE last 10 years, the Bureau of Fire Protection (BFP)-Davao has recorded a total of five fire incidents in Isla Verde, Barangay 23-C, with almost P20 million worth of damage.

In an interview Monday, August 19, with Senior Fire Officer 2 Ramil Gillado, Investigation Section chief of BFP-Davao, he said the biggest fire that occurred in the area was on April 4, 2014, caused by an unattended lighted candle.

The fire, which lasted for more than four hours, engulfed some 1,000 houses, leaving around 3,700 families homeless. The damage was estimated to be at around P15 million.

In a previous report by SunStar Davao, former Davao City Police Office (DCPO) director Vicente Danao said the candle, which caused the fire, was used during the pot session inside the house of Alyas Batchong.

On Friday, August 16, the second largest fire incident happened in the area.

Based on their initial investigation, the probable cause could be electrical-related.

Due to the massive scope, the alarm was raised to fourth alarm. The fire razed 150 houses, including places of worship, with an estimated damage of P2.6 million.

Based on their data in the last 10 years, other fire incidents in the area include the one on April 29, 2010 that was caused by unattended lighted candle with estimated damage of P300,000; September 27, 2012 caused by unattended candle with damage worth P500,000; and in December 2012, triggered by electrical short circuit and has an estimated damage of P750,000.

"Makita nato nga base sa record, electrical ug candle ang sagad hinungdan, mostly sa balay diha mga light materials ug naga tap lang ug linya sa kuryente sa ubang balay nga naay kuryente, ug ang uban nga walay kuryente kandila lang or lampara ang gamit (We can see that based on the data, fires in the area were caused by electrical short circuits and candles that were left behind. The people, who live mostly in houses built using light materials, would tap on to electrical wires of neighboring homes. Others who do not have electricity would use a candle or lamp to light their homes)," Gillado said.

He said fire in the area would spread quickly because of the barangay's location near the coastline. The wind is strong enough to fan the flames to spread quickly.

While it is common to hear about fire incidents happening in Isla Verde, Barangay 23-C, the BFP said Barangay 76 recorded the most number of fire incidents in the last 10 years.

In responding to these areas, Gillado said they would usually encounter many problems like narrow streets, which make it hard for fire trucks to get near to area where the fire is.