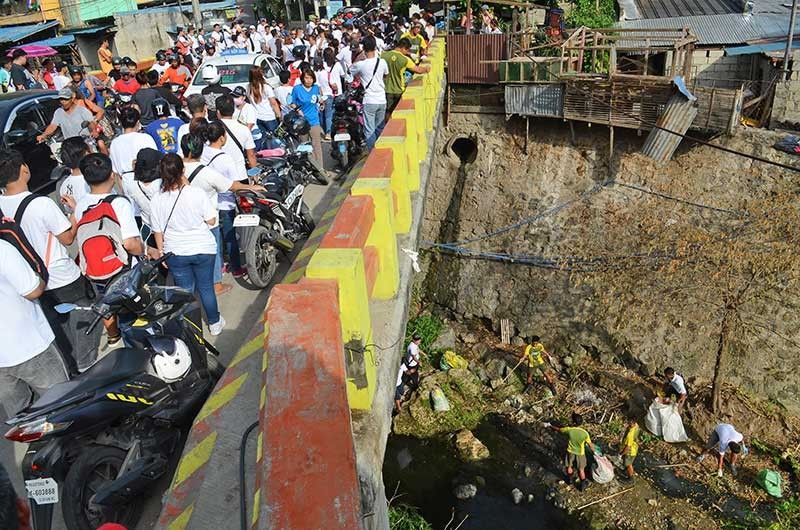 TONS OF TRASH. Volunteers and Cebu City Hall employees gather on the Sandayong Bridge in Barangay Sapangdaku ahead of the start of the four-hour cleanup of the Guadalupe River organized by the Cebu City Government on Saturday, Aug. 17, 2019. The massive cleanup conducted all the way to the Topaz Bridge in Barangay Pasil netted 70 metric tons of garbage. (SunStar Photo/Alan Tangcawan)

Labella issued the directive to Pasil Barangay Captain Julius Guioguio after some residents complained that people started throwing garbage in the portion of the Guadalupe River that runs through the barangay as soon as City Hall employees who participated in the activity on Saturday, Aug. 17, 2019, left.

The City ended up collecting 70 metric tons of garbage, not 21 metric tons as earlier reported, during the four-hour cleanup that started at 8 a.m.

The mayor pointed out that it is the function of barangay officials to see to it that cleanliness and proper sanitation are observed in their respective areas.

Those who fail in this regard will be issued a reminder for the first offense. They will get a warning for their second offense. A third offense will land them administrative sanctions, Labella said.

“In certain barangays that cannot sustain or just do not want to call attention to discipline their respective constituencies, we will issue the necessary reminders,” he said.

Guioguio, for his part, found the mayor’s directive unfair, but he said he would comply with the latter’s order.

Republic Act (RA) 9003, or the Ecological Solid Waste Management Act of 2000, states that local government officials and officials of government agencies concerned who fail to comply with and enforce rules and regulations promulgated relative to this Act shall be charged administratively in accordance with RA 7160 (Local Government Code of 1991) and other existing laws, rules and regulations. Officials who fail to comply may face suspension or be admonished.

Labella said barangay officials, as public officers, are governed under the rules and laws, particularly of the Local Government Code, and the Office of the Mayor has administrative authority over them.

Labella has already ordered the City Environment and Natural Resources Office (Cenro) and the City Legal Office to make sure that barangay officials have implemented RA 9003.

“They have to see to it that the officials have complied with the law and they have performed their duties in accordance with the law,” he said.

Aside from tapping the help of barangay officials, the mayor also asked residents to do their share by not throwing their waste in the river, adding that most households near waterways don’t have toilets.

Hours after last Saturday’s cleanup was completed, Angel Gimena, a Pasil resident, revealed that a number of people dumped sacks of garbage in the river again.

Gimena said it would have been better if there was a monitoring team and closed-circuit television (CCTV) cameras in the area to keep these violators in check.

Guioguio agreed with the pronouncement of the mayor. However, he said it would be hard to closely monitor violators and keep the whole barangay clean because they lacked manpower and resources.

He said they’d been implementing environmental ordinances, but they could not closely monitor every area because the number of barangay police officers was also limited.

He said the barangay has three garbage trucks, but only one is functional.

Guioguio said they will remind residents to place their garbage in one area so it will be easier to collect by the barangay and the City.

He also hoped the mayor would listen to his and other barangay officials’ concerns.

He said he already urged residents to wait for their garbage to be collected rather than dump it in the river.

Guioguio said the practice continues because residents hire somebody else to get rid of their garbage.

“There was one time we caught a child who is mentally challenged who was about to throw a sack of garbage in the river,” he said.

During last Saturday’s cleanup, the City had apprehended 21 violators of RA 9003 and City Ordinances 1361 (anti-littering ordinance) and 2031 (no segregation, no collection of garbage).

Dacua said they would not hesitate to file charges against these persons.

“We will impose the highest possible penalty from the law being violated because these laws being violated, this can send them to jail,” he said.

The people they apprehended must go to Cenro within seven days to settle their fines, the lowest of which is P1,000. If they don’t, they can be charged, he said.

Aside from monitoring waterways, the education, reinforcement, and rehabilitation team has started visiting schools to educate children on keeping their surroundings clean.

Dacua said they will not stop until life will return in the Guadalupe River and other rivers in the city.

The City will next clean the Mahiga Creek in September.

Dacua said the activity will be conducted quarterly.

On Tuesday, Aug. 20, Labella will meet with the city’s 80 barangay captains to discuss their obligation to keep rivers and their areas of jurisdiction clean, as well as to remind them of the laws governing them.

“We will apprise them that they really have to do their share in helping clean and clear the waterways, rivers and creeks.... For sustainability, the cooperation of the barangay must be involved. This garbage problem has metamorphosed into a social problem and it is for all of us to solve,” the mayor said.