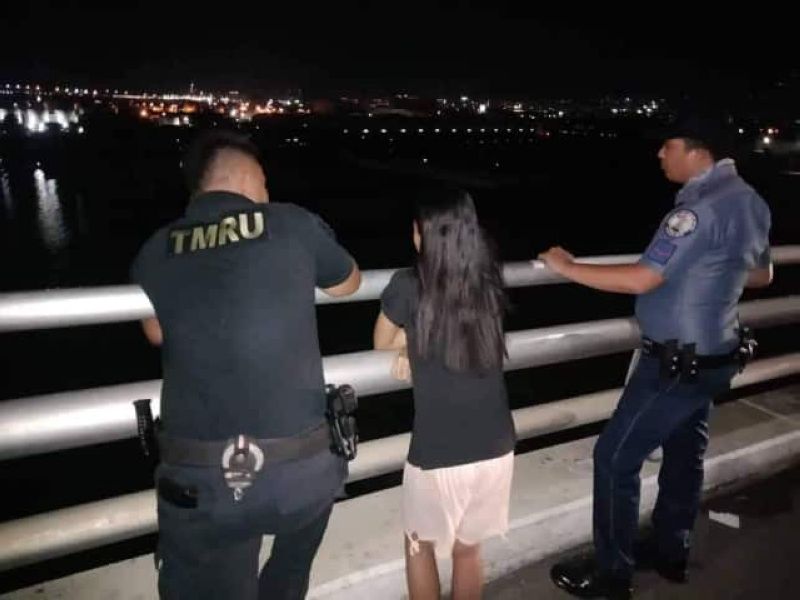 SAVIORS. Two police officers persuade a 16-year-old girl not to jump off the Marcelo Fernan Bridge on Sunday night, Aug. 18, 2019. After suicide incidents at the two bridges that connect the cities of Mandaue and Lapu-Lapu, Cebu, Police Regional Office 7 Director Debold Sinas ordered his personnel to monitor the bridges and prevent suicidal persons from taking their own lives. (SunStar Photo/Arvie Veloso)

THE deployment of police officers at the two bridges that connect the cities of Mandaue and Lapu-Lapu was effective in preventing a 16-year-old girl from jumping off one of them.

A team from the Mandaue City Police Office (MCPO) persuaded the girl not to jump off the Marcelo Fernan Bridge on Sunday night, Aug. 18, 2019. This happened hours after the body of a 16-year-old male student athlete, who died in an apparent suicide, was found floating in the waters off a shipyard in Barangay Opao.

In a text message to Superbalita Cebu, MCPO Director Jonathan Abella said the girl was reportedly depressed after being scolded several times by her grandparents.

The MCPO personnel were able to convince the girl not to take her own life. She agreed and went home.

However, Sinas also sent his personnel to monitor the Cansaga Bay Bridge, which connects Mandaue City and Consolacion town.

Sinas instructed his personnel to conduct regular patrols along the three bridges.

Some patrol cars should be on standby in the middle of the three bridges as a way to detect any person who might attempt to jump, said Sinas.

Personnel from the MCPO’s Tactical Motorcycle Riders Unit conducted patrols at the bridges.

Sinas urged the public to immediately report to authorities any person who has suicidal tendencies, or urge them to undergo counseling.

As to the case of the student athlete, Sinas said the investigators saw no foul play involved in the boy’s death.

Sinas said they already spoke to the boy’s family, and the investigators would no longer conduct an investigation on the incident.

Meanwhile, Dr. Rene Obra, head of the Center for Behavioral Sciences of the Vicente Sotto Memorial Medical Center in Cebu City, said there are three possible reasons why some teenagers would choose to take their own lives—love problems, peer pressure and problems within the family or school.

Based on studies, Obra said men are more likely to attempt suicide than women.

Men have strong personalities but some of them can’t express what they feel, said Obra.

The psychiatrist further said that some persons took their own lives if they were under the influence of illegal drugs, which can induce hallucinations when taken in large dosage.

Despite the low chances for women to take their own lives, some women who are depressed try to kill themselves by slashing their wrists.

Some teenagers who have suicidal tendencies just need attention from their parents,

Social media is also not helping in preventing suicides as it could lead to “copycat suicides,” said Obra, who further said that bullying among teenagers is also a factor that contributes to teenage suicides.

Obra urged teens to avoid bullying others as teasing often hurts the feelings of others.

He also urged guidance counselors in schools to be alert for students who may have suicidal tendencies. (From AYB & ANV of Superbalita Cebu/JKV)