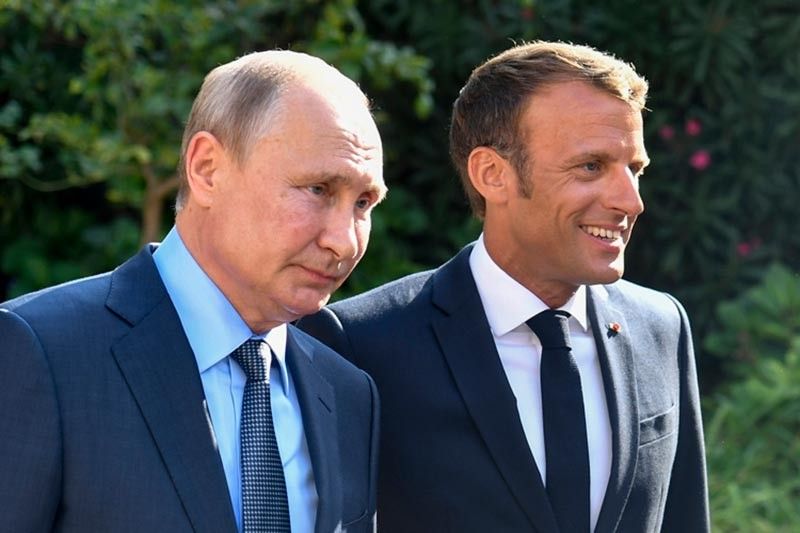 PARIS -- French President Emmanuel Macron and Russian President Vladimir Putin vowed to give a new boost to peace talks with Ukraine and to improve Moscow's relations with the European Union during a meeting in southern France on Monday, August 19.

But they disagreed on other issues, including Syria and the Russian crackdown on opposition protests.

Macron invited Putin to his summer residence, the Fort de Bregancon on the French Riviera, for a meeting followed by dinner, just a few days before opening a meeting of the Group of Seven nations in the city of Biarritz with U.S. President Donald Trump and other leaders.

France holds the 2019 presidency of the G-7, which also includes Britain, Canada, Germany, Italy, and Japan. Russia was excluded from the group after it annexed Crimea in 2014.

Macron intended to share the outcomes from his meeting with Putin with other world leaders in Biarritz on August 24 to 26.

Speaking in a joint news conference before the meeting, Macron spoke of his hope that the election of Ukraine's new president, Volodymyr Zelenskiy, provides opportunity to relaunch negotiations in Russia's conflict with the country.

"I think Zelenskiy's points of views, his choices are game-changing," Macron said.

Putin expressed "some optimism" on the subject.

Both presidents opened the door to a four-way meeting involving Ukraine, Russia, France, and Germany, possibly in the coming weeks.

The conflict in eastern Ukraine has killed more than 13,000 people since 2014. A 2015 Minsk agreement, brokered by France and Germany, has helped reduce fighting. But, clashes have continued and political settlement has stalled.

France and Russia also agreed to push for de-escalation of tensions between Iran and the U.S.

Macron has taken a lead role in trying to save the 2015 nuclear accord, which has been unraveling since Trump pulled the U.S. out of the agreement. Russia, along with Britain, Germany, and China, remains a part of the accord.

"We worked a lot in recent weeks to prevent unrest" in Iran and the whole region, Macron said.

Macron and Putin said they would discuss the normalization of ties with the EU, which remain tense after Russia's annexation of Crimea and support for separatist insurgents in eastern Ukraine.

The French president envisioned long-term relations between Moscow and Brussels based on confidence-building and security measures — on condition the conflict with Ukraine is settled.

"The relation of France and Russia, of Russia and the European Union is absolutely decisive," Macron said. "I know all the things that have divided us, the misunderstandings over the last decades... I know another thing, which is that Russia is European, very profoundly, and we believe in a Europe which stretches from Lisbon (Portugal) to Vladivostok (Russia)," Macron said.

In a landmark move, the Parliamentary Assembly of the Council of Europe restored the credentials of Russia's delegation in June, five years after it was stripped of voting rights following Crimea's annexation.

Putin thanked France for playing a key role in the decision, and said he is convinced this will help build a relationship of trust on the continent.

Both presidents didn't hide their disagreements on other topics.

Earlier this month, France strongly condemned the Russian crackdown on opposition protests, denouncing the arrests of more than 2,000 people and the "clearly excessive use of force."

Putin defended Russian police, saying he doesn't want his country to see the kind of rioting and other violence that engulfed France during yellow vest protests against economic injustice and Macron's presidency.

Macron said the situations couldn't be compared, adding that in France, protesters were able to run in elections.

Macron expressed "deep concern" over the military offensive led by the Syrian regime, backed by Moscow, in the region of Idlib, a rebel-controlled area in the northwest of the country.

Paris is pushing for a truce that would prevent more civilian deaths and flows of refugees, but Putin welcomed the "efforts of the Syrian military to put an end to the terrorist threat" in that area. (AP)