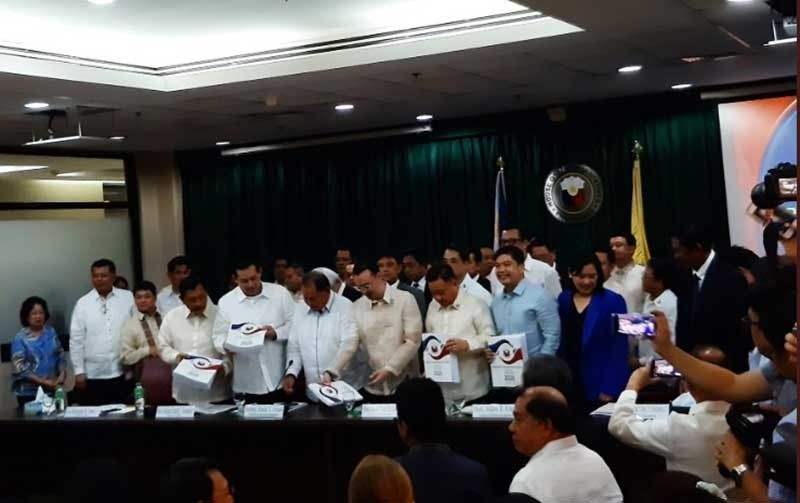 Avisado, in presenting the 2020 National Expenditure Program (NEP), described it as the "people's budget", one that is inclusive and renews the Duterte administration's push for real change.

He said it will finance the implementation of the Universal Health Care (UHC) Law, the peace and development efforts in the Bangsamoro Autonomous Region in Muslim Mindanao, the Rice Competitiveness Enhancement Fund that will shield farmers from the adverse impact of rice imports, and the newly created Department of Human Settlements and Urban Development, among others.

"Every peso of the P4.1 trillion keeps in mind the welfare of our fellow Filipinos," he added.

Cayetano, in accepting the budget, said they expect a "less tedious" budget with no pork barrel insertions.

"We know that this budget will focus on good governance, the campaign against drugs and corruption. You will see a Congress that will be participating in the fight against corruption," he said.

The budget will be less tedious because there will be less parochial concerns, which will now be covered in each department's budget, he said.

Pork barrel insertions will be a thing of the past because this budget will ensure "equitable" distribution of development funds.

Each area in the country will get development funds, but areas that are frequently struck by calamities or areas like Marawi City, which is still undergoing rehabilitation after the five-month siege by extremists, will get more.

Pork barrel has been struck down by the Supreme Court as unconstitutional, but even if it was legal, Cayetano said there is no need for it under the 2020 budget.

He said the House will work "day and night" to ensure that the budget is passed by October 4.

The House committee on appropriations will hold four budget hearings a day, even on Thursdays and Fridays. Plenary sessions will be held at 5 p.m., after the budget hearings.

Davao City 3rd District Representative Isidro Ungab, chairman of the House committee on appropriations, said in his opening remarks that they aim to deliver a responsive, dynamic national budget that will truly meet the needs of the people, especially the poor, as requested by President Rodrigo Duterte during his State of the Nation Address on July 22, 2019.

Ungab echoed Duterte's plea for help in pulling an estimated 6.0 million Filipinos out of poverty.

Cayetano was confident that the process will be smooth because Avisado and Ungab, who will be leading the budget deliberations, are both close associates of Duterte and have worked with the President while he was mayor of Davao City.

Avisado was a former Davao City administrator while Ungab chaired the Davao City Council committee on appropriations under Duterte as mayor.