P3-M bounty up for killers of Calbayog dentist 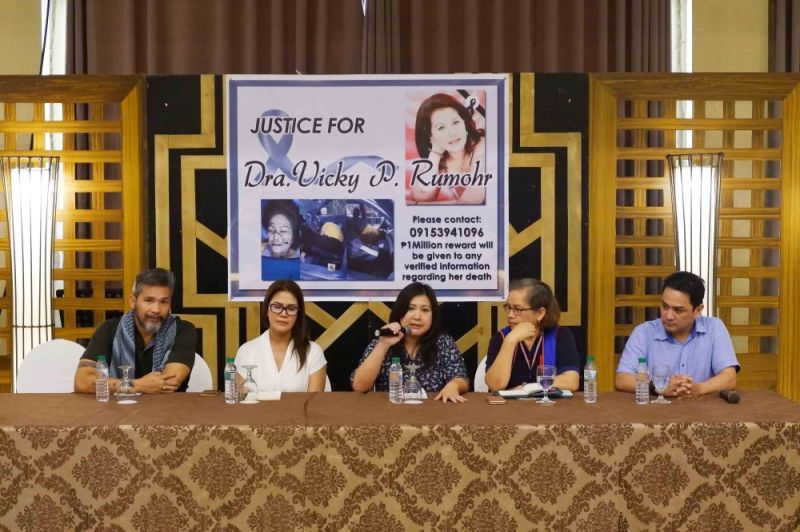 SAMAR. The family of slain dentist Dr. Vicky Rumohr announced a P3-million bounty for any solid information that will lead to the capture of the gunmen and mastermind behind their matriarch's killing. Seated (from L-R) were: Ignacio Rumohr (nephew), Maricris Rumohr (niece), Kathleen Valestra (daughter), Rosita Roque (National Coordinator, VACC), and Dino Hugo (son). (Contributed photo)

THE family of slain dentist and businesswoman Dr. Vicky Rumohr has offered a P3-million reward to anyone who could give solid information that will lead to the arrest of the people behind the killing of their matriarch.

In a press conference in Calbayog City recently, daughter Kathleen Rumohr Hugo Valestra, who was joined by her brother Dino, cousins Ignacio and Maricris Rumohr, and Rosita Roque, national coordinator for the Volunteers Against Crime and Corruption (VACC), did not point out any motive in the killing of her mother, but said they do not believe the incident was politically motivated.

The shooting happened around 4 p.m. of April 15, 2019 while Dr. Rumohr, 69, was driving her pick-up vehicle along Magsaysay Blvd. extension on the way to her office in Narcisa Hills Subdivision in Calbayog City.

The dentist sustained a single gunshot wound that pierced through her cheek and out her nape.

"My mother is well loved and respected in the community and we are puzzled why no one comes out to help us solve the crime. The people seem afraid of pointing to the perpetrators," Kathleen said.

Kathleen assured witnesses that any information will be treated with the highest confidentiality and that, if need be, the family will help secure their safety.

Roque, meanwhile, assured: "While justice is not served, VACC will not stop and will continue to help the family in any capacity."