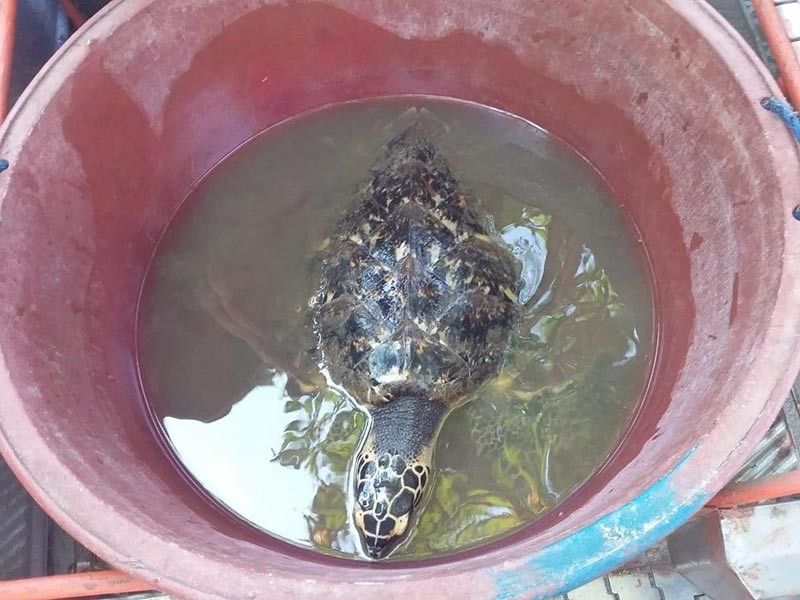 BACOLOD. The Hawksbill sea turtle rescued by a fisherman in the waters of Barangay Bagumbayan in Valladolid town early morning Monday, August 19, 2019. (Photo by Mark Cabrillos)

ANOTHER Hawksbill sea turtle, an endangered species, was rescued by a fisherman in the waters of Barangay Bagumbayan in Valladolid town early morning Monday, August 19.

Emma Flores-Arandilla, focal person for solid waste management of the Municipal Environment and Natural Resources Office (Menro), said the sea turtle was trapped in the fishing net of a motorized banca.

“He (Samodio) immediately coordinated with the Menro,” she said, adding that the sea turtle was released back to the sea after the tagging conducted by the Community Environment and Natural Resources Office (Cenro)-Bago.

Authorities have not found injuries on the animal, which is about a year old.

It weighs one and a half kilogram with a width of 34 centimeters and length of 42 centimeters.

The fisherman turned over the turtle to the Cenro for custody. It has no injuries.

The sea turtle, which is 25 centimeters wide and 38 centimeters long, was also released back to sea.

The fishermen brought the “pawikan” at the coastline, then reported to authorities the incident.

The sea turtle has a length of three feet and width of 28 inches. It weighs about 65 kilograms.

Menro personnel along with those of the Philippine National Police and Bantay Dagat inspected the animal.

No injuries were found, Flores-Arandilla said, adding that the sea turtle was then released back to the sea.

Flores-Arandilla said that sea animals like turtles, whale sharks and Rizzos dolphins normally “appear” during the period from July to December.

Thus, Menro is intensifying its information and education campaign on proper handling and rescuing of these animals during these times, Flores-Arandilla.

In fact, the local government along with the barangays will conduct a cleanup activity among coastal communities on August 22.

“This is to prevent stranded sea animals from being tangled by fishing nets and other garbage, and eradicate plastics that can poison them,” she added.