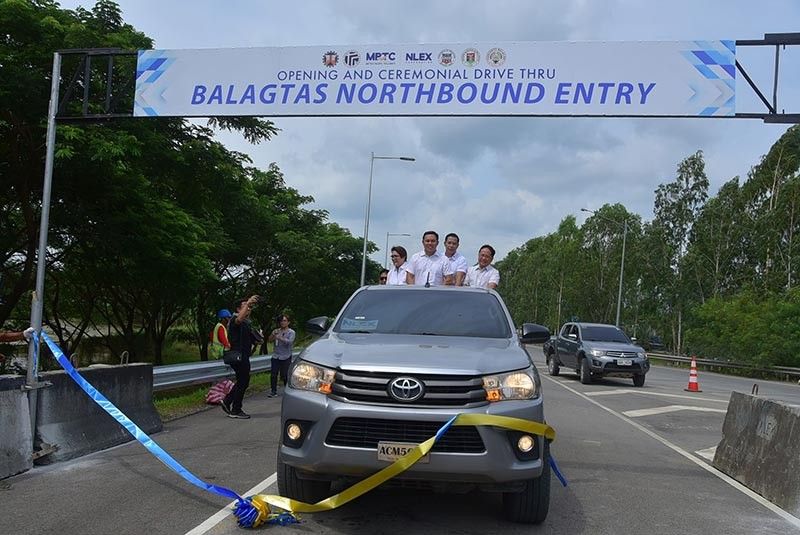 The 600-meter road project is jointly undertaken by the Department of Public Works and Highways (DPWH) and NLEx to provide direct access to motorists coming from Bulacan going to places in the north.

In particular, the DPWH constructed the 213-meter portion of the project, including the access road from the Plaridel Bypass Road going to the expressway and other necessary improvements in the existing road networks, with a funding of some P36 million.

The NLEx, for its part, worked on the 334-meter portion of the road amounting to P26.8 million, which included the additional ramp at the existing Balagtas interchange to provide entry access for northbound vehicles coming from the area.

According to DPWH Secretary Mark Villar, the opening of the NLEx Balagtas Northbound Entry will finally decongest traffic at the NLEx Sta. Rita exit and in the Daang Maharlika, particularly Plaridel and Guiguinto sections.

"Currently, motorists from Plaridel, Balagtas and other neighboring municipalities have to pass through local roads going to Bocaue or Sta. Rita to access the northbound section of NLEx, but with the new Plaridel Bypass Road Balagtas entry, our motorists can now be spared from being stuck in the traffic congestion," he said.

Villar added that road users will gain significant economic savings as re-routing of vehicles is expected to prevent the traffic build-up by 30 percent and reduce the travel time to Pampanga and other places in the north by up to 30 minutes.

"This new project, which is also part of President Rodrigo Duterte's 'Build, Build, Build' program, is also aimed at addressing the future traffic demands in the area since we all know that Bulacan, Pampanga and most places in North Luzon are among the fastest growing provinces," he said.

NLEx Corporation President and General Manager Luigi Bautista, meanwhile, said the new project is still part of the tollway management to improve the mobility and productive, and provide the best travel experience to its clienteles.

Bautista said about 80,000 to 10,000 motorists are expected to benefit from the new road network during regular days, and more than 150,000 during weekends and holidays.

"With the new Balagtas Northbound Entry, we will be able to address the long queues at the other interchanges, especially Sta. Rita and Bocaue, and our road users can be spared from the traffic at the local roads," he said.

He also disclosed that NLEx management has several projects in the pipeline to better provide quality service to motorists, including the Tambubung interchange also in Bulacan that is set to open on October.

The DPWH is also set to construct 790.348 linear meters another road project at the southbound exit of the NLEx in Balagtas amounting to P110,748,997.50 to complement the existing Plaridel Bypass Road, DPWH-Central Luzon Director Aurelio Tolentino said.

He reiterated that the DPWH continues to support and prioritize infrastructure projects such as these to fully tap the potentials of Bulacan province that will help spur development in the whole region.

Investors cite Bulacan as the next growth hub amid upcoming major infrastructure projects in the province. It is also instrumental in the thriving economy of Central Luzon, which remained one of the significant contributors to the country's overall growth.

Bulacan Second District Representative Gavini Pancho, who is proactively pushing for new access roads in the province, said the new Balagtas Northbound Entry will not only facilitate ease of travel, but more importantly open doors of opportunities to local businesses.

"We are grateful and excited about this. It's something that the whole community has been waiting for," Gonzales said.

Aside from this project, a new Tambubong Interchange in Bocaue, Bulacan is underway to enhance the Bulacan road network and help alleviate heavy traffic conditions at the Bocaue Interchange. A southbound entry and northbound entry and exit toll plazas will be constructed in Barangay Tambubong to serve as an alternate route for motorists bound for Sta. Maria Pandi, Bulacan and nearby towns. (With reports from Reynaldo G. Navales and Charlene A. Cayabyab)