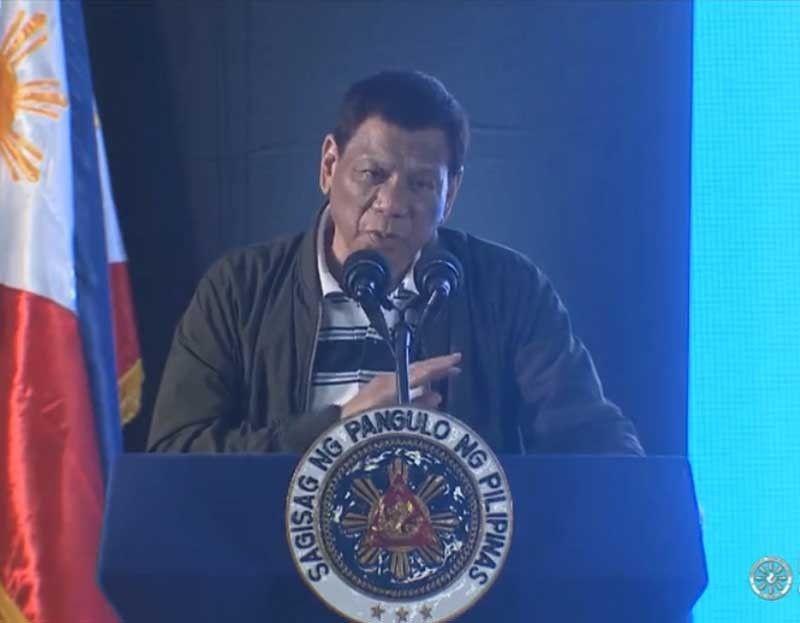 SEEMINGLY unfazed by China's possible response, Preisdent Rodrigo Duterte on Wednesday, August 21, assured that he would invoke the arbitral ruling when he visits Beijing.

In a speech delivered in Romblon, the President said he would discuss with Chinese President Xi Jinping the Philippines' landmark win before the Hague-based Permanent Court of Arbitration, whether the Chinese official "likes it or not."

"That's why I'm going to China and the first thing that I will bring out before them [is] the arbitral ruling," Duterte said during the inauguration of the first and largest hybrid solar-diesel rites in Tablas Island in Romblon.

He is scheduled to visit China on August 28 to September 2.

"So whether you like it or not, will it make you happy or not, angry or otherwise, I'm sorry but we have to talk the arbitral ruling," he added, relating how he will tell Xi about it.

On July 12, 2016, the arbitral court ruled in favor of the Philippines's petition, after it invalidated China's expansive claims to the resource-rich South China Sea.

Prior to Duterte's latest stance, he had refused to invoke the arbitral ruling, as he wanted to improve Manila's bilateral ties with Beijing.

China, claiming neary 90 percent of the South China Sea, has likewise repeatedly ignored to acknowledge the sea ruling and continued its relentless reclamation and militarization of its man-made islands in the busy waterway.

Duterte, in his latest speech, stressed that he still wants the Philippines and China to resolve the sea disputes "peacefully."

"Ganito iyan eh (It is how it is), so we do not go to war. Hindi naman talaga tayo pipwedeng makipag-giyera sa kanila (We cannot afford to go to war with them). I will just feed the army and the military and the police to the mouths of hell. Mamamatay lahat iyan (They will die)," he said.

The President also believed that the planned joint exploration and development of natural resources with Beijing in the South China Sea would be a "good start" to address the maritime dispute.

Under the proposed joint exploration arrangement, the Philippines will get 60 percent of the oil and natural gas reserves while China will take the remaining 40 percent.

"Any other adventures or expeditions in the marine oceans of our exclusive zones, economic zones, will have a direct bearing on that arbitral ruling. Hindi ako papayag na TY (thank you) iyan. Hindi naman ako makikipag-away (I will not allow them to just thank us. But I will not wage a war)," Duterte said.

"Then what we get, if there is a start in the exploration and in the extraction of whatever whether [it] is in the bowels of the earth. The proposal of 60-40 in our favor would be a good start. I hope that it would radiate into something like towards how do we solve the arbitral ruling peacefully," he added. (SunStar Philippines)