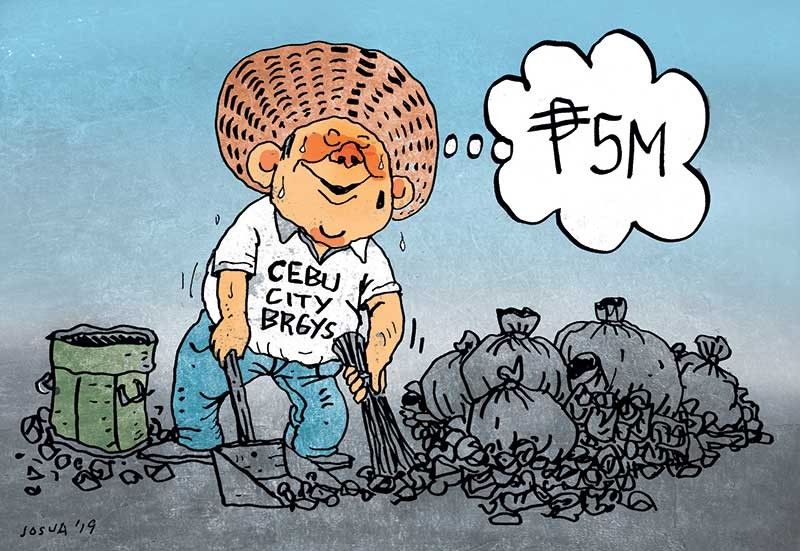 THERE is P5 million for each of Cebu City’s 80 barangays for freehand solutions to trash management.

Cebu City Mayor Edgardo Labella announced this during a meeting with barangay captains Tuesday, Aug. 20, 2019. The meeting revolved around the problem of garbage in the city.

Labella said he understands that the lack in resources hinders the barangays’ efforts to supposedly clean their areas. The cash assistance will hopefully propel all efforts.

The other catch is that should the City find any of the barangays efficiently sustaining their cleanliness campaigns, the latter will get another P5 million as incentive.

A committee will assess the cleanliness efforts of the barangays based on efficiency in garbage collection and performance wellness.

Promptly emerging in the discussion were the plans to spend the P5 million aid to purchase garbage trucks in the barangays. Labella said a good number of project proposals he had gone over signified the buying of trucks.

However, Association of Barangay Councils president Franklyn Ong of Kasambagan said that of the 80 barangays in the city, only close to 20 do not own garbage trucks. This means that majority of the barangays can dedicate the funds to other aspects in their cleanliness drive.

“Well, I am happy that at least today, this (budget) is finally acknowledged...the barangay cannot function without the support of the City,” said Ong.

Imagine, the ABC president said, what 80 garbage trucks running around the City can do.

But funds and logistics are nothing but finite resources in the cleanliness campaign. Perhaps, the City can encourage the barangays to come up with more creative ways to manage their garbage, thus adding “creativity” or “innovation” in assessing the deserving winners of additional incentives.

Part of the innovation in the campaign perhaps may also include ways in inspiring change in the mindset among citizens as far as garbage is concerned. Because people’s cooperation, really, is the most crucial in this campaign.

Let’s ask the barangays to think of ways to rally their citizens in the cleanliness drive.