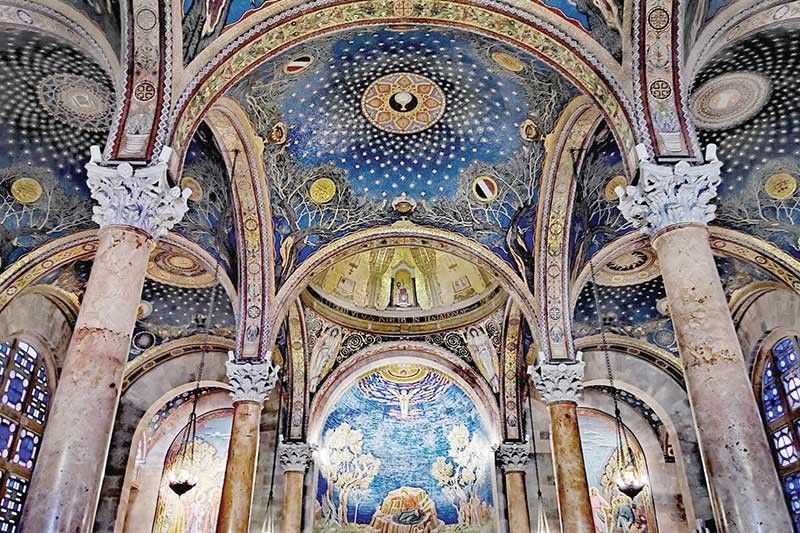 Church of all Nations. Interiors. (Photo by Grace M. Avanzado) 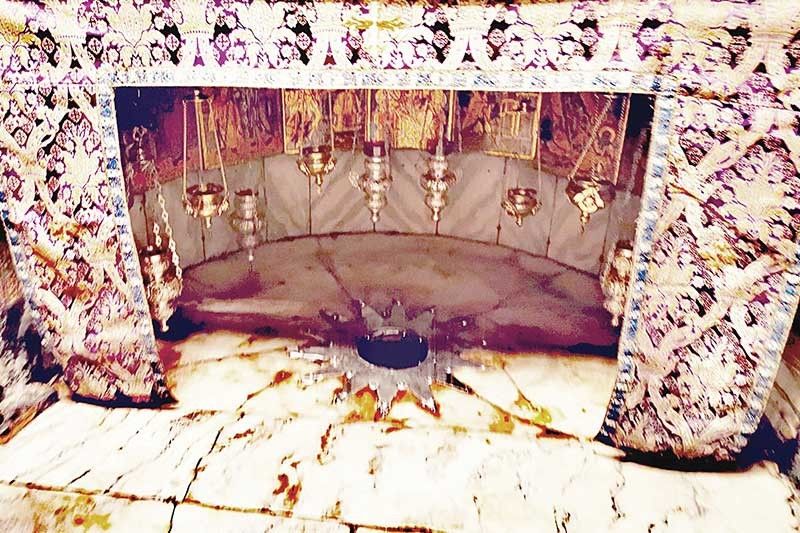 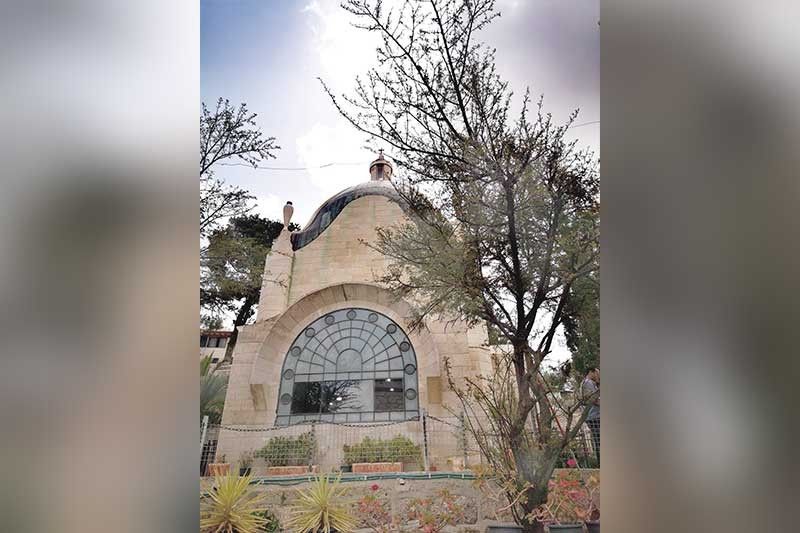 Tree of Thorns outside the Dominus Flevit Church. (Photo by Grace M. Avanzado) 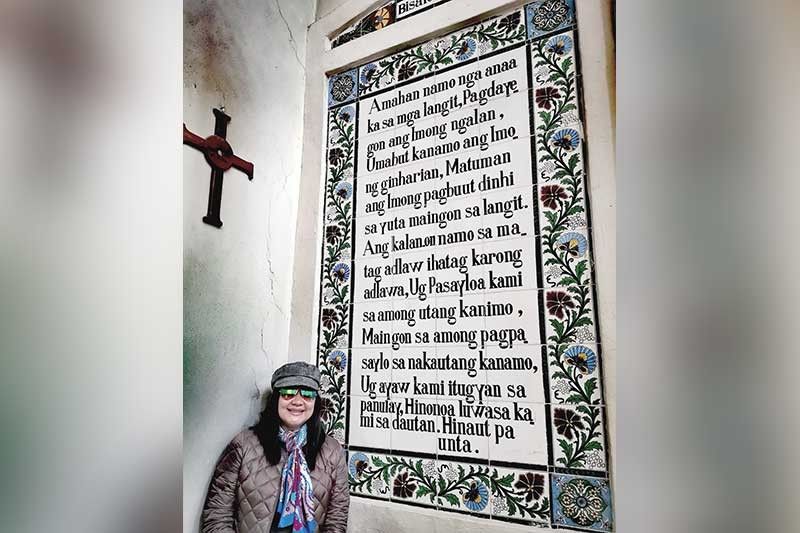 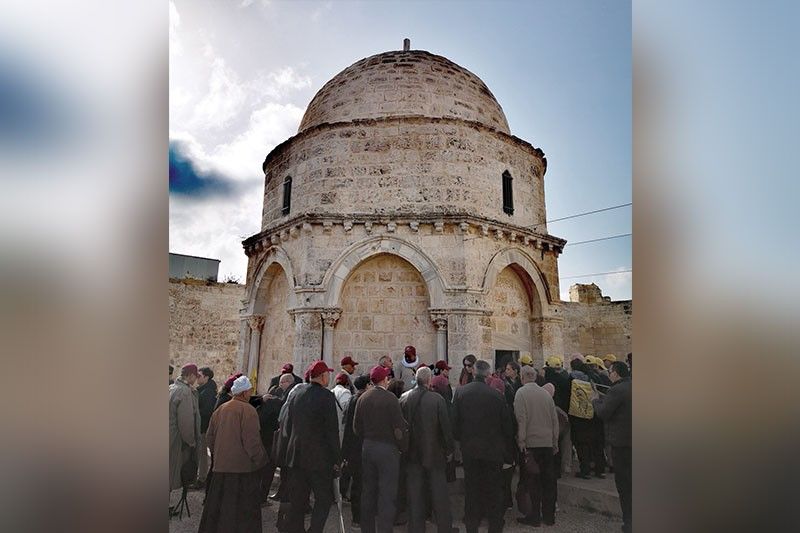 Mt. of Olives. Dome of the Ascension. (Photo by Grace M. Avanzado) 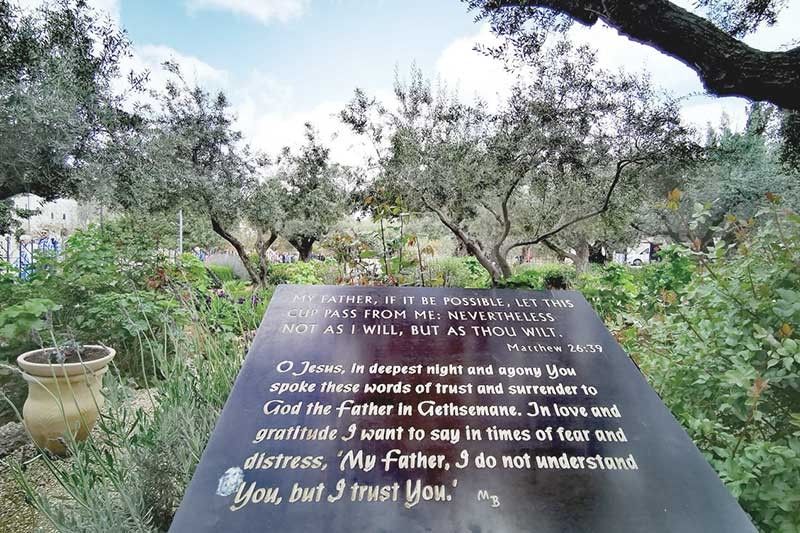 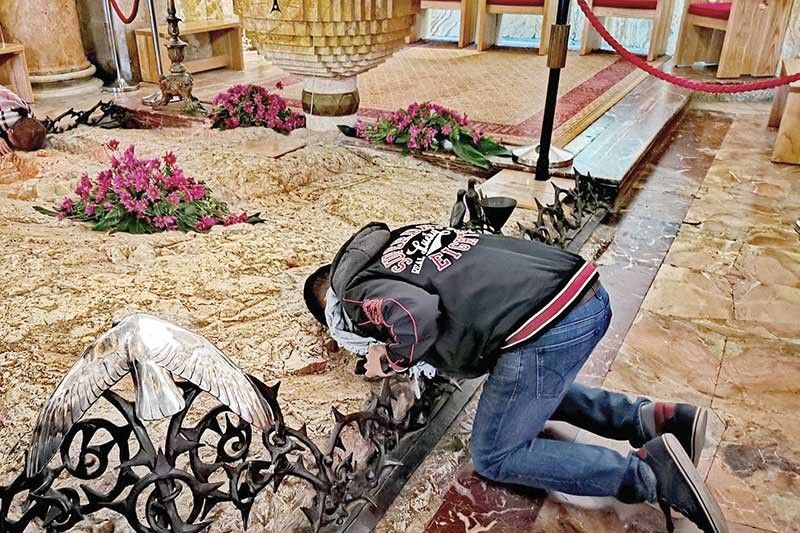 Tour Chaplain. Msgr. Joseph Tan venerating the rock where Jesus is believed to have prayed during his agony. (Photo by Grace M. Avanzado) 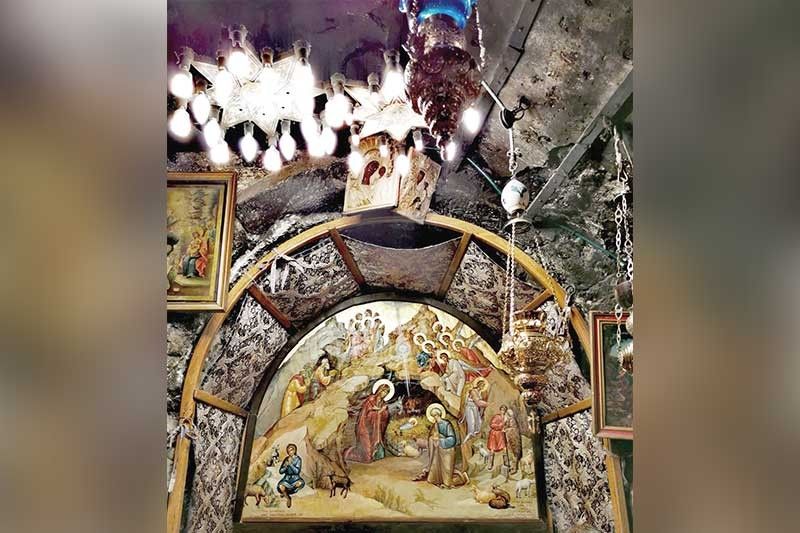 Detail depicting the birth of Jesus at the Church of the Nativity. (Photo by Grace M. Avanzado)

DAY three started out with an early morning visit to the Mount of Beatitudes to visit the eight-sided church representing the eight beatitudes.

The garden of the church was filled with roses and blooming jacaranda trees. It was one of my favorite stops in this whole leg.

We then proceeded to Cana, celebrated as the scene of Jesus’ first miracle – turning water into wine at the request of his Mother when a relative’s wedding feast ran out. The Franciscan Church here is a popular site for pilgrim couples to renew their vows. Soon, we were witnessing couples in our group renewing their vows. That happy feeling was truly in the air, made more special by some couples who had their children with them.

Considered a sacred place since ancient times, our short visit to Mount Carmel gave us a glimpse of both the Stella Maris Monastery - which is the world headquarters of the Carmelites and the Baha’i Shrine of the Bab, whose gardens on slopes were so breathtaking that I almost got run over while trying to photograph it from the road.

Our mass for the day was said in a cave in Shepherd’s Field, one of the three possible

locations where the Angel is said to have announced the birth of Jesus while shepherds were tending to their flock.

The group had the most packed day in Israel on day four, which started with a very early visit to the Mount of Olives, where we all alighted from the bus and went straight to the Dome of the Ascension. It is a small mosque marking the place where Jesus is known to have ascended into heaven. We moved on to the Church of Pater Noster, where we all held hands and sang the Our Father in our native tongue. After leaving that part of the mountain, we walked downhill (this path is not recommended for those with limited mobility) to the Church of Dominus Flevit. This teardrop-shaped church where we had mass commemorates the memory of Jesus weeping over the future fate of Jerusalem. Once you step outside, the sweeping view of the walled city and its famous Golden Dome needs a few moments to sink in. Before we left, Taleb showed us thorn trees in front of the church, most probably the same kind of thorns used in the Crucifixion. The tips of the thorns emit a poison, it was here, at this moment, that chills went up my spine at the thought of that crown of thorns on Jesus’ head.

We then moved on to enter the Garden of Gethsemane to see what was once an ancient olive grove during Jesus’ time. Now it is a flourishing, well- tended garden. On one side is an ancient olive tree that is cordoned off, supposedly the spot where Jesus wept and prayed the night before he was taken away.

Adjacent to the Garden of Gethsemane is the Church of All Nations. Built over a rock believed to be where Jesus prayed in agony. Pilgrims gather around an area at the main altar where this rock is to venerate it. I was lucky the church was not very crowded and was able to kneel and pay my respects without being prodded to hurry up.