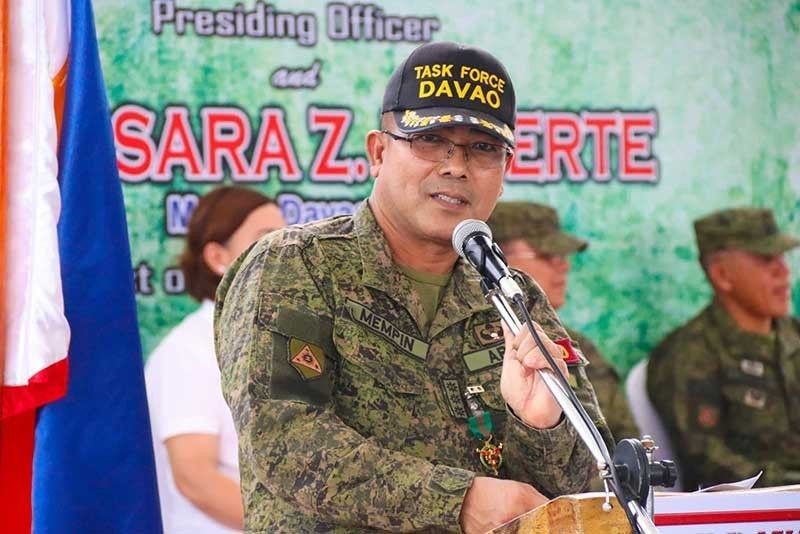 A TOP military official said they are now 80 percent on their target to clear Davao City from insurgency within this year as directed by Davao City Mayor Sara Duterte-Carpio.

Philippine Army’s 1003rd Infantry Brigade commander Colonel Nolasco Mempin said Wednesday, August 21, that the areas in Paquibato, which used to be the stronghold of the New People’s Army (NPA), have been so far peaceful and for this year, they have not reported any violent incidents perpetrated by the rebels.

However, they received reports of sightings and presence of an armed group, allegedly from the Guerilla Front 55, in the community which attempted to recover Paquibato area which has been the Front’s base for the longest time.

He said they are strengthening their community support programs (CSP) both in the Third District of Davao City and some parts of their area of responsibility that are no longer under Davao City like Bukidnon and Davao del Norte.

Mempin also attributed the improved peace condition with the establishment of Davao Peace 911 which focused on the development of Paquibato district.

Based on their record, there are still 16 barangays in the third district that are still considered conflict-affected thus, they continue with their CSP to eradicate the influence of the communists in the area where the Pulang Bagani Company (PBC) 2 and 3 operates.

However, they are just making sure though that the area is already clear from the presence of the armed group to prevent their revival.

Mempin further said that an area will only be considered to be free from NPA influence if the barangay officials and functionaries are already doing their duties and responsibilities without fear or intimidation from NPA and that the delivery of basic services to the grassroots are already continuous and without obstacles.

Aside from that, those issues being used by the lefts to entice people to go against the government must be addressed by the barangay unit.

Despite the positive development, they still considered the current security condition in Paquibato as “fragile peace” considering that in the previous years, people complain that after the military was able to weed out the NPA, the group came back and continued with their operation after some time. With this, he took it as a challenge to sustain the peace and development of the ongoing programs implemented on the ground. (JCR)