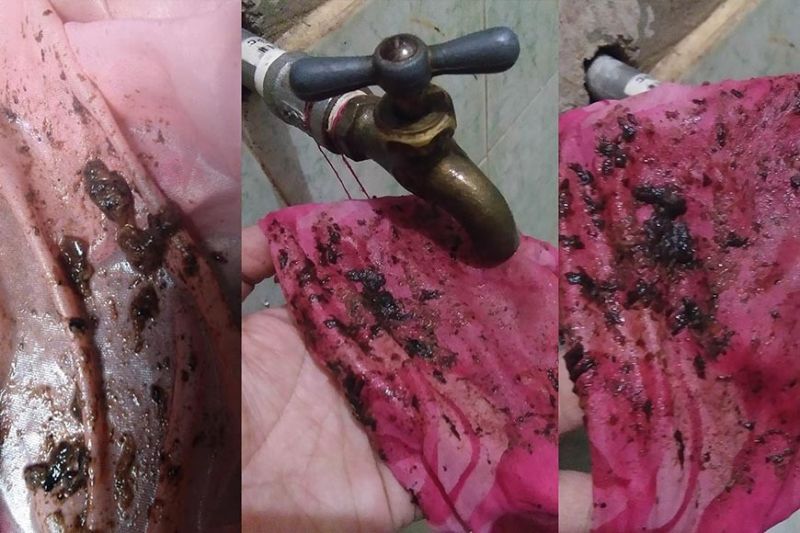 DAVAO. Anne Malinao posts photos on Facebook showing an undetermined object coming from her faucet in her house at Indangan. (Photo courtesy of Anne Malinao)

THE Davao City Water District (DCWD) said residents of Panacan, Cabantian, and Indangan continue to struggle with the water quality because of being “geographically disadvantaged” areas.

On Sunday, August 18, Indangan resident Anne Malinao shared photos on her Facebook account of the cellophane, which she uses as a filter for her faucet, collecting unidentified objects coming out from her faucet.

“Diyos ko unsa ni, water district grabi ka hugaw sa tubig oi, may gani gi sala namo. Unta oi aksyonan ninyo ni DCWD. Please intawon hugaw kaayo ang tubig baho pa gayod kaayo. [sic] (Water District [DCWD], the water you supply to us is full of dirt. We have to filter it before we could use it. It also has a foul odor. Please act on this),” Malinao said on her post.

Those with similar experiences, particularly in Cabantian and some areas in Panacan, also shared their experiences in the comment section.

In a Messenger interview, she said her fellow residents have been experiencing it since last week.

“Oo lalo na sir pag mata sayo, baho imbornal or siptik... [sic] (Especially when we wake up early in the morning, the water smells like it came from the sewage or from the septic tank),” Malinao said.

DCWD spokesperson Jovana Cresta Duhaylungsod said on Tuesday, August 20, that they have already taken action on the complaint.

Duhaylungsod said they have also been receiving similar complaints in Panacan, Cabantian, and Indangan.

“Lahi man gud ila water quality. Highly mineralized siya wherein naa’y deposit niini sa mga pipe over the years (Their area has a different water quality compared to others. It is high in minerals, which has made its way into the pipes),” she told SunStar Davao in a phone interview.

She said these minerals are carried by the water to the customer’s water pipes once the water pressure increases.

DCWD is still conducting a test on the water from the complainant.

However, she said DCWD said all waters distributed to the consumers underwent various testing.

“Sa Water District na side, bawal mi mo-release og tubig sa customers na dili siya nakapasar sa Philippine National Standards for Drinking Water (PNSDW). Mao na amo SOP (standard operation procedure) regarding sa quality assurance (On the side of DCWD, we do not distribute the water to our consumers without passing the PNSDW. It is our SOP regarding water quality assurance),” Duhaylungsod said.

Meanwhile, the official said the water utility had been conducting water system flushing, a process of cleaning or “scouring” the interior of the water distribution main pipes by sending a rapid flow in the affected areas.

Aside from the flushing, she said DCWD targets to operate again the nano filtration system treatment facilty system for the CWSS.

She said it was completed in 2015, the year wherein continuous water outage was experienced by the residents.

However, she said operating the treatment facility would lessen the production of water to be allocated to the consumers.

Duhaylungsod said they were able to initially the filtration system in December last year and observed that the water quality have improved in some areas. She said DCWD is eyeing to have it operational again before the year ends.

However, Duhaylungsod said the Davao City Bulk Water Supply Project (DCBWSP) is still the best solution to the water situation of the mentioned areas.

DCBWSP is a water project of the DCWD and the Apo Agua Infrastructura Inc. (AAII) that is expected to provide around 300 million liters of water to the consumers once it will fully operates in the first quarter of 2021.

“Once the bulk water will fully operate, we will be stopping operation of some wells in the District 2 area and the water to be supplied will be coming straight from Tamugan River,” Duhaylungsod said.

Meanwhile, she said the water quality problem in Cabantian, Indangan, and Panacan is an isolated case.

For complaints, she urged the customers to immediately report the problem to DCWD, and they will immediately take action for free.