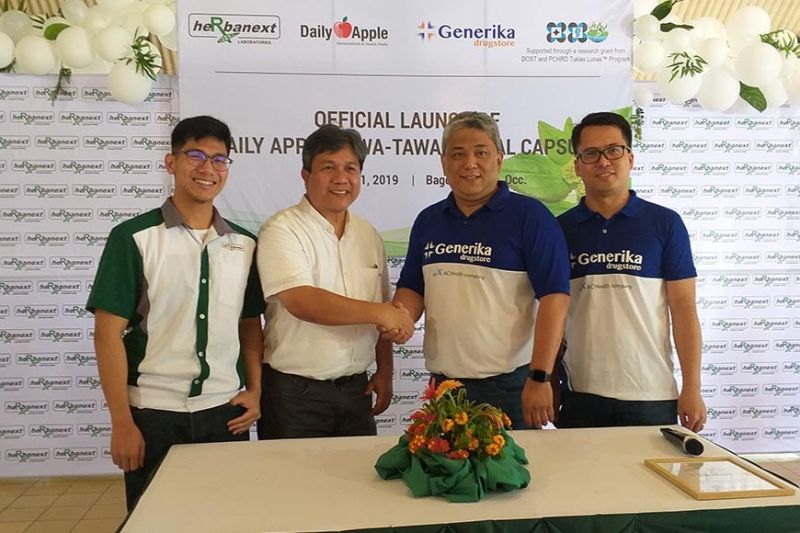 A LOCAL toll manufacturing company producing herbal products like food supplement is attempting to develop the first clinically proven drug to cure dengue, a prevalent fatal disease in the country this time.

Its president Philip Cruz, on the sidelines of the launching activity at The Quiet Place in Bago City, said they plan to have a clinical trial starting next year.

Cruz said the product has yet to undergo three more clinical studies for three to four more years for it to pass as a drug.

This will be in collaboration with University of San Agustin’s Center for Natural Drug Discovery and Development in Iloilo City.

“With the clinical study, this time, we hope that the medical community will start accepting the product,” he said, adding that “what we need to do right now is for the doctors to use it in the health centers and perhaps we can develop better strategies in managing dengue.”

Established in 2001, Herbanext is one of the pioneers in the development of medicinal plant extracts for health and wellness in the Philippines.

It became part of the Drug Discovery and Health Products Program known as “Tuklas Lunas” of the Department of Science and Technology (DOST)’ s Philippine Council for Health Research and Development (PCHRD) in 2013.

The program’s goal is to further discover and develop local herbal drugs from the dense biodiversity of the country.

Cruz said the company has availed about P8 million in grant from the DOST with research fund and loan component.

The fact that the DOST supported the conduct of the research so they believed in it, Cruz said.

“When we do the clinical study, the agency will again make a shot in promoting this product,” he added.

Aside from Cruz, other Filipino researchers and experts have been doing studies for a cure against dengue virus using herbal plants.

A drug that can cure dengue is also being developed by a team of researchers from the De La Salle Medical and Health Sciences Institute and Pharmalytics Corp.

For the Daily Apple Tawa-tawa Herbal Capsules, the product released as a food supplement with no therapeutic claims pending further clinical studies is distributed nationwide by 900 branches of Generika Drugstores.

Places with high prevalence of dengue cases including Western Visayas are prioritized for distribution.

Though it was officially made available in the market starting yesterday, the company has initially released 1,000 bottles a month ago.

It is now distributing 50,000 bottles monthly, but the volume can still change depending on the demand of the market.

The current suggested retail price (SRP) of the product is P15 per capsule while the dosage is six capsules per day.

The food supplement is only intended for dengue patients.

Cruz said since the product was made available in the market, they received feedbacks on faster recovery of dengue patients.

He said, though, that medical doctor will say that dengue is a natural limiting disease so the patients will really recover.

“So we don’t have proof for that yet, what we are really just relying on is the hundreds of years of Filipino folk wisdom that have been using it.”

Said to have antiviral and anti-thrombocytopenic (platelet increasing) component, tawa-tawa or gatas-gatas (Euphorbia hirta) remains the most popular traditional remedy for dengue among Filipinos.

A study was conducted by Herbanext with University of Santo Tomas to find out if spray dried extract of tawa-tawa can produce the same effect as the plant.

“It showed that it really increases the platelet. In terms of safety, 10 grams per kilo based on my studies is still non-toxic,” Cruz said.

Cruz said the group supplies a ton of tawa-tawa per month, which is being bought by the company at P30 per kilogram.

Cruz said some of the supplies, they plant themselves. The company is also working with the Negros Oriental State University, which is also with an IP group.

“Our target is IP as main source because the tawa-tawa plants are cleaner in the upland and to help them also,” he said, adding that they are open to other communities for supply of raw materials.

As of now, the manufacturer needs more than a ton per month. Thus, it supports the push for the propagation of large scale plantation of medicinal plants like tawa-tawa.

It can be recalled that preclinical studies conducted have established the safety of the product and it was given a Certificate of Product Registration (CPR) by the Food and Drug Administration (FDA) in April this year.

Despite the previous dengvaxia mess, the local herbal products manufacturer is optimistic to develop a clinically proven drug for dengue soon.

“With the dengue epidemic declaration, we want to help Filipinos recover fast from the disease,” Cruz said, adding that “we want to achieve such breakthrough here in Negros Occidental.”