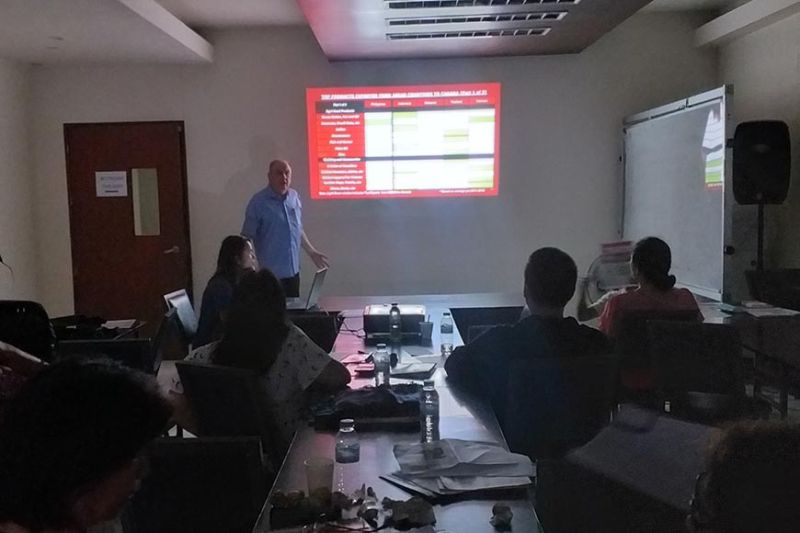 BACOLOD. Canadian Chamber of Commerce in the Philippines president Julian Payne (standing) talks on the Philippine export opportunities in Canada during a presentation held at the Negros First Negosyo Center in Bacolod City Tuesday. (Photo by Erwin P. Nicavera)

IN THE bid to increase Philippine exports to Canada, a foreign business group has presented to Negrense industry stakeholders the export opportunities that they may explore.

Canadian Chamber of Commerce (CanCham) in the Philippines president Julian Payne, in a presentation held at the Negros First Negosyo Center in Bacolod City on Tuesday, August 20, underscored the import demand of Canada and the different markets within the country for various provinces.

Payne also highlighted where the Philippines and other Association of Southeast Asian (Asean) countries are successful in exporting to Canada.

“You must have to know the market in every part of Canada if you’re looking for the sizeable portion of its population,” he said, adding that “do not think Canada as a single market.”

The half-day activity was initiated by the Provincial Small and Medium Enterprise Development (SMED) Council and Bacolod-Negros Occidental Federation for Information and Communications Technology (BNEFIT).

Other discussions included the top Philippine exports to Canada and where the country could do even better, and the relative success of Philippines in exporting compared to major Asean competitors.

The CanCham official also presented the profiles of markets within Canada including the distribution and socio-economic profile of population, and major urban centers and markets there, among others.

Mary Ann Colmenares, chairman of the Provincial SMED Council, said the presentation on the Canadian market was very informative.

Colmenares said the CanCham official presented a well-defined analysis of the products that Canadians patronize and buy from the Philippines as well as Asean in general.

“We have not saturated the export market in Canada, we have yet to build access to it,” she added.

Colmenares said the presentation will help in opening up another access to export market for the products produced in Negros Occidental.

She added that while the market in Canada is not as big in volume as the United States, it will be a good match for the capacities that the local SMEs presently have.

“Market studies are important for producers to be able to know the potentials of exporting to Canada,” the Provincial SMED Council official stressed.