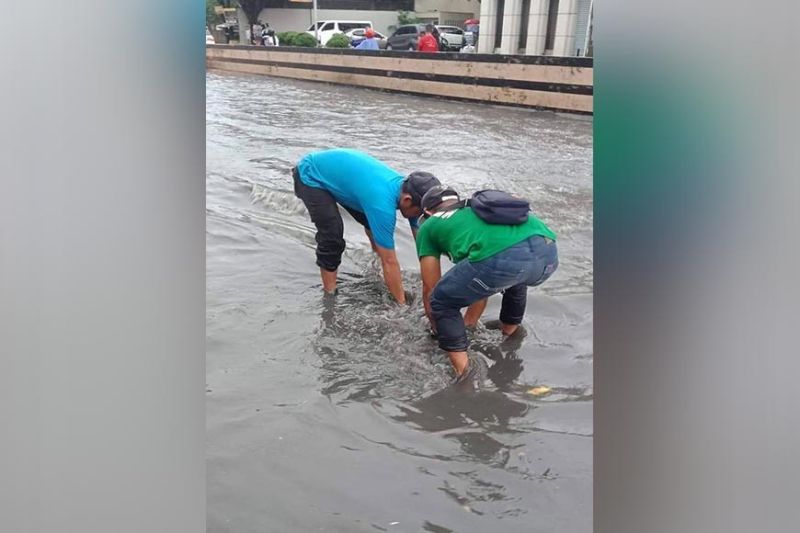 HIGHWAY OF FLOOD. Two men clear a drainage from garbage along the Natalio B. Bacalso South National Highway in Talisay City, Cebu during a downpour on Tuesday afternoon, Aug. 20, 2019. (Contributed photo)

HEAVY rains on Tuesday afternoon, Aug. 20, 2019 caused rivers to overflow and flooded several areas in Metro Cebu, including the barangays of Linao and Bulacao in Talisay City.

The downpour, brought about by a trough or extension of the low pressure area (LPA), inundated portions of the national highway that runs through Bulacao and Linao.

The LPA developed into tropical depression Ineng at 8 p.m. on Tuesday.

Ineng has maximum winds of 55 kilometers per hour and gustiness of up to 70 km/h. But it is expected to intensify into a tropical storm within the next 12 to 24 hours.

At 10 a.m. Wednesday, Aug. 21, the center of Ineng was in the east of Infanta town, Quezon in Luzon, according to the Philippine Atmospheric, Geophysical and Astronomical Services Administration (Pagasa).

“Ineng remains less likely to make landfall on any part of the country. Furthermore, this weather disturbance may intensify into a tropical storm within 24 hours,” read a portion of Pagasa’s report issued at 11 a.m. on Wednesday.

In Talisay City, the knee-deep floods in Bulacao and Linao last Tuesday caused traffic in the area and stranded several passengers who were on their way home.

After the downpour, the Aksyon Agad Team of Talisay City Mayor Gerald Anthony Gullas collected the trash that was carried away by the flood.

Some of the team members helped man the traffic as some vehicles malfunctioned in the middle of the road at the time.

The rain started at 3:05 p.m. and ended around 4 p.m. Pagasa Visayas recorded 21.6 millimeters of rainwater.

In his Facebook page post, Gullas said the drainage outfall project will soon start near East Visayan Academy in Bulacao. He hopes this will solve the flooding in the area.

The drainage outfall, which is the discharge point of a waste stream into a body of water, will be constructed by the Department of Public Works and Highways (DPWH).

Gullas promised to meet with the City Engineering Office and DPWH officials to solve the flooding in Linao, considered as the catch basin of rainwater coming from the mountains. (From FMD of SuperBalita Cebu, KAL)