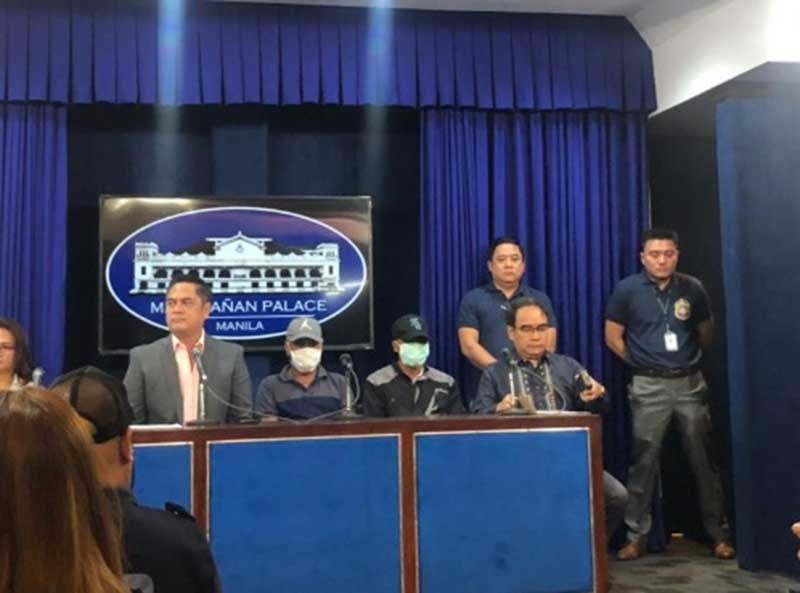 MANILA. Helario Lapi Jr. and Lapi and Renato Sardonsillo, witnesses in the killing of Kidapawan City radio anchor Eduardo Dizon, are presented before the media during a press conference in Malacañang on Thursday, August 22, 2019. (Photo by Ruth Abbey Gita/SunStar Philippines)

The suspects were named by Lapi, who acted as a "spotter" during the killing of Dizon but turned into a state witness.

Lapi and the other witness, Renato Sardonsillo, were presented before the media during a press conference in Malacañang on Thursday, August 22, 2019.

Lapi said he went public against the other suspects to serve justice in Dizon's case.

"Para masolba 'yung kaso (I decided to be a witness to solve the case)," he said.

Dizon, station manager of Brigada News FM - Kidapawan Station, was shot dead while he was on his way home on July 10, 2019.

Communications Secretary Jose Ruperto Martin Andanar, who was also present at the Palace briefing, assured the witnesses that they would be given protection, especially since the suspects are deemed "influential people."

"The reason why they are here is to assure them of government protection, as they are being subjected to intimidation or other forms of threats by the suspects, who, based on our information, are influential people in their province," the Communications chief said.

Madonna Dizon, widow of the slain broadcast journalist, lauded the PTFOMS for its efforts to bring her husband's killers to justice.

She said she was "100 percent" convinced that the named suspects were the brains behind her husband's death.

She noted that since her husband became critical of Kapa, the two of them received death threats from the religious group.

"One hundred percent po sir kasi wala namang kaming ibang threat na natatanggap at wala naman kaming binabanggang iba kundi 'yung Kapa operations in Kidapawan (I am 100 percent sure that they are the suspects because we do not receive threats from others and Kapa is the only organization we are condemning)," Dizon said.

"Everyday na po nilang tini-threat ang buhay naming mag-asawa. Hindi po kami nag-request ng security noon kasi nakasanayan na namin (They have been threatening us. We did not request for security because we had already been used to it)," she added.

She said she already considered the killing of her husband as "case closed," following the identification of the suspects.

But for Egco, the suspects would still be given due process.

He was confident, however, that the government has a "strong case" against them.

"Hinihingan na sila ng counter affidavit (They have been asked to submit their counter affidavit)," Egco said. "With the strength of what we have now, mahihirapan sila (it will be difficult for them) and we have a strong case against them. But still, I have to clarify, of course, we accord them the right to due process still."

Kapa's investment activities have been ordered shut down by President Rodrigo Duterte. Authorities had described the Kapa investment scheme as the biggest scam to hit the country. (SunStar Philippines)