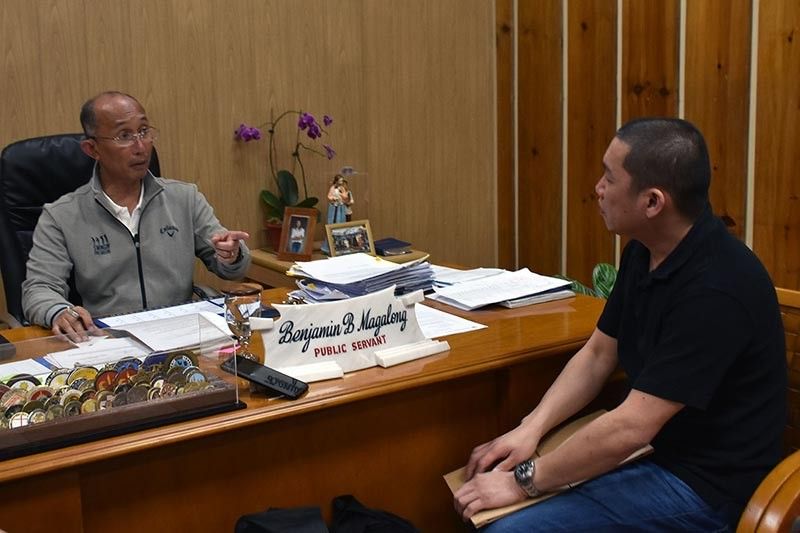 BAGUIO. Baguio City Mayor Benjamin Magalong meets with a bar owner, as he called for a compliance with permits and city ordinances before they can operate, following the closure of establishments for various violations. (Redjie Melvic Cawis)

BAGUIO City Mayor Benjamin Magalong has stood firm on his decision to keep over 30 bars closed until he is convinced in the resolve of owners to follow the law.

Magalong has closed establishments operating as bars with permits issued as restaurants in the city in a bid to protect the youth and keep order in the summer capital.

"I had a meeting with them with over 200 attendees. I basically reprimanded them, admonished them, telling them that this is what is happening... there is molestation of women, minors being allowed to enter bars; there is no control of the youth getting heavily drunk," Magalong said.

The mayor said the dialog with bar owners has been ongoing, adding that the manifesto of commitment submitted to him lacked sincerity and resolve, which failed to move him to allow the establishments to resume operations.

"I told them, the ball is in your court to abide by provisions of law and protection of minors. They submitted a 10-point commitment but it is empty. It has no sincerity. It has no commitment," he said.

Magalong said bar owners also pledged to police their own ranks but he wants the commitment in writing.

He said he did not budge from his stand last week, when bar owners were pressuring him to allow them to operate over the long weekend.

Magalong tagged a latent dishonesty on the part of owners saying permits given by the City were for restaurants but operations were found to be for bars, irking the chief executive.

"Some are operating without permits or are operating as restaurants but are bars. Some are coffee shops but they are selling liquor," he said.

Moves to circumvent the law was also brought up by asserting that beer is classified as a beverage and not an alcoholic drink, and this further angered Magalong.

In his first weeks in office, Magalong, with the licensing office and Baguio City Police Office, padlocked and sealed eateries, vape shops, sari-sari stores selling cigarettes and bars for violations of rules set by the City.

Magalong said some owners have gone ahead and filed a case against him. He added he advised the petitioner not to withdraw the case but proceed as it will become a test case for the peculiar situation.