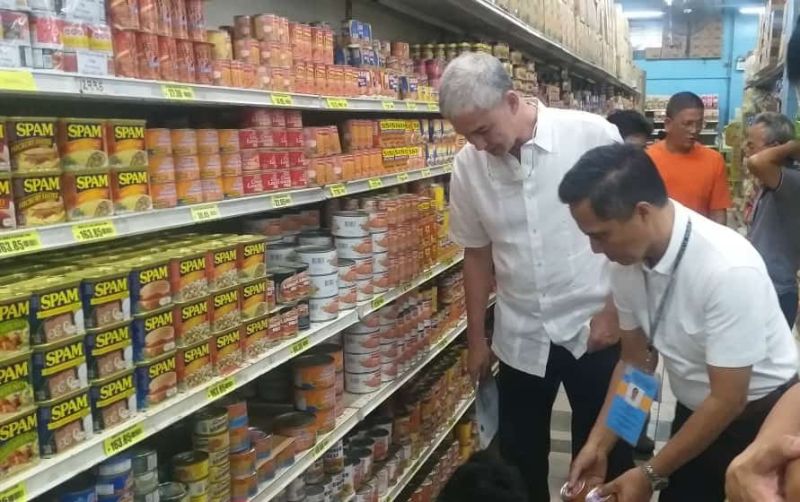 AMID the suspicious deaths of hogs in some areas in the country, the Provincial Government of Negros Occidental is stepping up measures to protect its swine industry.

Though no abnormal deaths among pigs were recorded yet in the province, members of the Provincial Task Force on African Swine Fever (ASF) led by its chair Governor Eugenio Jose Lacson Thursday, August 22, inspected some local supermarkets, storage facilities and ports.

Lacson said there is a need to protect the swine industry, which is one of the bigger industries in Negros Occidental.

In fact, the province ranks first in terms of backyard swine production in the country according to the Philippine Statistics Authority (PSA).

Lacson appealed to Negrenses to patronize first products, especially pork meat, produced in Negros Occidental rather than the imported ones.

"Let us support our very own swine industry," he urged Negrenses, adding that cooperation among all stakeholders is important to protect the province's swine industry.

During the inspection, the task force instructed personnel of a supermarket inside 888 China Town Square in Bacolod City to pull out Ma Ling, a canned pork products made in China, from the store's shelves.

Ma Ling is one of nine brands listed under the Food and Drugs Administration (FDA) Order 2019 - 046, directing importers, distributors, retail outlets and other dealers to immediately recall all pork meat products imported from countries suspected to be affected by ASF virus.

The two other supermarkets inspected are those inside SM City Bacolod and Ayala North Point in Talisay City. They were found compliant with the order.

A storage facility at Barangay Sincang-Airport in Bacolod City with pork meat products from Spain, Europe and Canada was also found compliant.

Veterinary quarantine officers assured the governor and other members of the group of the strict monitoring and implementation of quarantine measures.

Lacson said it is good that most supermarkets have removed the listed brands of pork meat products from their shelves.

For the storage facilities, he said what the task force concentrates on is whether they comply with necessary permits and licenses.

In terms of ports of entries, however, Lacson said they are looking at reports especially in cities of Escalante and San Carlos.

"There may be some processed products coming in, maybe, without necessary permits," he said, adding that "so we'll get in touch with respective mayors to alert their veterinary offices to man the ports."

The governor said "we need their cooperation and if the province has to assign personnel then we will do so."

For other cities and municipalities, the task force chair recalled that they already had a meeting and these localities especially those with ports were already alerted.

"We will go around as needed," he said, adding that since the task force members come from different areas they can always coordinate with their respective local government units (LGUs) so that the alert level will always be high.

Amid the threat confronting the country's swine industry, the Provincial Government does not see a need yet to ban the entry and exit of pork meat products.

For as long as required permits are complied, Lacson said, stressing that "we don't want to kill the industry."

Constant monitoring, therefore, will be conducted, the governor added.

Records of the Provincial Veterinary Office (PVO) showed that the province current annual swine production for both backyard and commercial is 510,000 heads.

Dr. Ryan Janoya, head of Animal Health and Meat Inspection Services Division of the PVO, said the province still imports pork despite the surplus in supply.

Those importing are local food processors using pork by-products like "maskara" and parts for chorizo making.

He, meanwhile, said that a notice of violation was already issued to the supermarket selling Ma Ling brand.

"The pulled out products were already sealed and endorsed to the FDA," Janoya said, adding that they have not yet recorded any swine deaths in the province that could pose alarm to the local industry.

Meanwhile, Provincial Veterinary Veterinarian Dr. Renante Decena, who is also the co-chair of the task force, assured that there is no African Swine Fever in Negros Occidental after the Department of Agriculture said that they have recorded several "suspicious" deaths of hogs in some areas of the country.

According to Decena, they are strictly regulating the sale of frozen meat in the province's markets.

As a precaution, Decena said they have formed a task force which would handle ASF. The task force had already sent a meat handling advisory to all mayors in the province in order to keep them free from the hog disease.

Based on the advisory, all frozen meat must be stored in a product temperature which will not exceed zero degrees Celsius.

He also urged the cooperation of the public regarding the ASF issue.

Based on studies conducted by veterinarians outside the Philippines, the infection is believed to have originated from ornithodoros, a type of soft-bodied tick. Hogs are infected after they are bitten by a tick, which then contaminates their blood.

The virus has no effect on humans but there is a need for strict monitoring at airports and seaports in order to prevent the virus from entering the country.