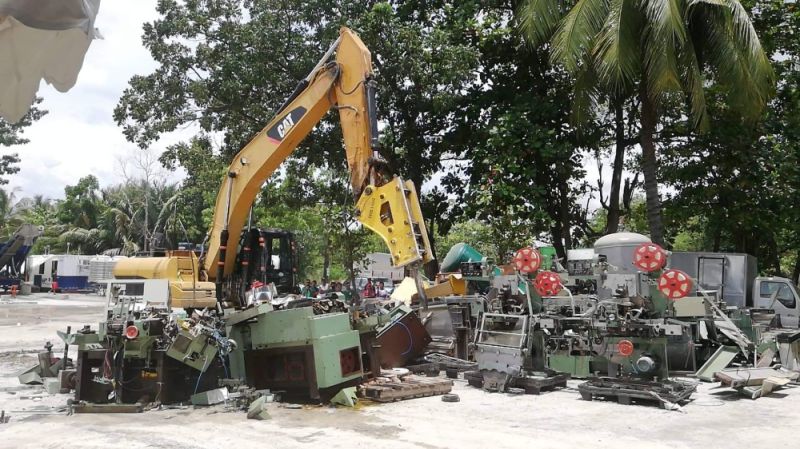 CAGAYAN DE ORO. A backhoe operator commissioned by the Bureau of Internal Revenue destroys contraband cigarettes along with the machines that manufacture them on Thursday, August 22, following a crackdown of the agency in Northern Mindanao due to alleged tax code violations. (PJ Orias)

CIGARETTE-MAKING machines and some contraband "worth billions" were destroyed by officials of the Bureau of Internal Revenue (BIR) Thursday, August 22, in a waste management facility in Barangay Bayabas, Cagayan de Oro City.

The agency, however, did not mention the specific total value of these items.

BIR Deputy Commissioner Arnel Guballa said this serves as a warning to taxpayers to follow proper regulations under the law.

Guballa said most of the owners of the seized items were foreign nationals and may have been illegally manufacturing and distributing cigarettes for five years now.

"We want to send a message to our taxpayers here who are not registering with the BIR that they are doing this illicit manufacturing of cigarettes. The government is really bent on running after these illegal activities of these people. They are manufacturing without paying excise tax," Guballa said.

The BIR, meanwhile, urged the public to inform their office if they have information of people illegally manufacturing cigarettes.

Advincula said informants will receive rewards from the BIR in exchange of information.

The scraps from the destroyed machines were turned over to the BIR disposal team for proper disposal.