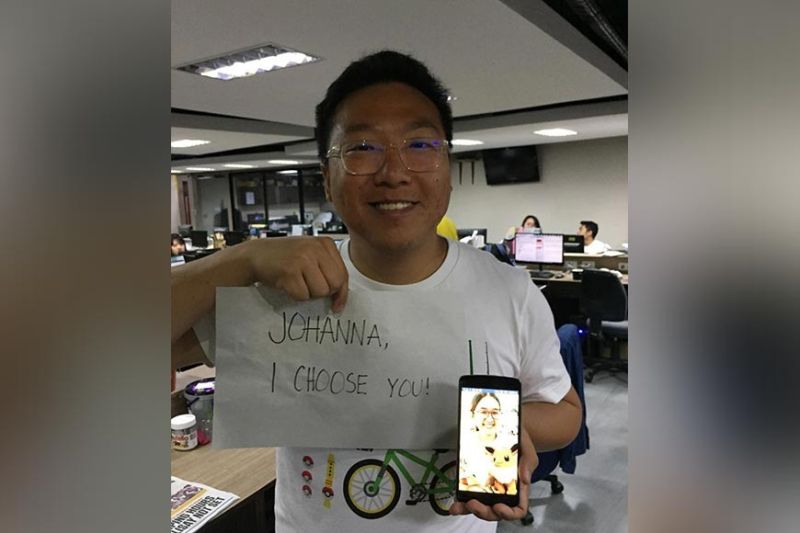 THE VERY BEST. Singaporean Brandon Tan, the top ranked Pokémon Go player in the world, dropped by SunStar Cebu (SSC) for an interview. In the photo, he holds up a fan sign for reporter Johanna O. Bajenting, a Pokémon Go player herself.

BRANDON Tan is recognized the longest reigning, number one-ranked Pokémon Go player ever since the game was launched in 2016.

The 28-year-old gamer from Singapore started playing after his friends encouraged him to play it one night when they were supposed to be playing “Clash of Clans.” After trying it out for himself—driving around for two hours from 4 a.m. until 6 a.m.—he realized how fun it was and has since, mastered the tricks and trades of the game until eventually earning the top spot by December 2016.

Currently, he has been sharing his knowledge and meeting the different Pokémon Go communities all over the world, having been to the United States; visiting the different cities of Australia and Canada, to name a few. This month, he is in the Philippines. It is his first time in the country.

The gamer first visited Manila, before arriving in Cebu last Aug. 20. He began his tour here with a Legendary Raid HR at midtown Cebu the next day; a meet-up at The Terraces, Ayala Center Cebu last Thursday; Lure party and meet up at Plaza Independencia yesterday, and is set to make an apperance at the Mirror Cup at The Tavern today before flying to Davao on Sunday.

“The reason why I came to Cebu is the same reason why I’ve been traveling to different countries and cities—to meet the ‘Pokémon Go’ communities, to share my experience, to learn from them also and to help them improve the way they play the game,” shared Tan. To him, playing the game requires drive; the mindset in terms of time, money and location or playground; and most importantly, the safety of being able to play the game after hours.

Given that playing a game requires some serious focus, he shared that he’s okay to sacrifice a bit of his time now and not play the game as much as before.

“I’ve played the game to the standard that I don’t need to care about my stats so much as before,” At present, Tan has accumulated XP (experience points) close to a billion points. Clearly, he can rest easy.

Though Tan may be the “go-to guy” for tips on reaching one’s goals when playing “Pokémon Go,” he always emphasizes the importance of not getting too engrossed to the point of addiction that one doesn’t find the time to eat, sleep or do other important things. He shared that when he was starting, he would devote 16 hours in a day to play the game but minimizes the number of hours when he’s around family.

“Do not push yourself too much. There’s always another day to play the game; another chance to catch the Pokémon.”

More importantly for Tan, the main thing to remember is playing the game not out of competition but for leisure.

“‘Pokémon Go’ is a game for you to play as a lifestyle; For you to have fun with your friends and not so much of beating someone. When I started the game, I never had the intention to beat anyone. It’s just so much so that I played the game for so many hours that my stats just racked up to this extent,” he shared.

Given his popularity, it’s not new to him to be approached by fans wherever he may be. He doesn’t mind this at all, given his mindset.

“I would rather be able to spend time talking to people than catching that extra Pokémon.”