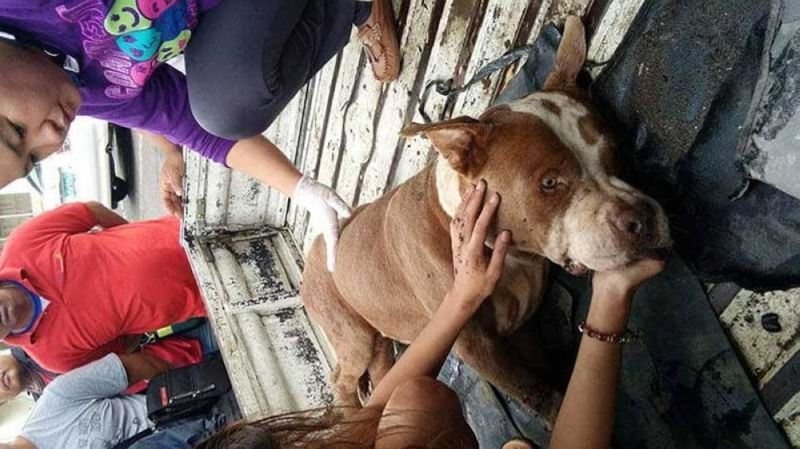 CEBU. Hachitso, a six-year-old Pitbull, was badly beaten by his owner’s neighbor in Cebu. (Photo by City of Talisay Veterinary Office)

A YEAR since the first animal welfare desk in the country was launched in Davao City, one of its stakeholders claimed that Dabawenyos are still not aware of its existence.

Animal Rescue Rehabilitation and Fostering (ARRF) founder Marites Batacan said the desk, which aims to address issues on animal violence in the city and eliminate the trade of dog meat, has only received few complaints.

“Naa man ga-reklamo pero dili sila ana kadaghan, ug ing-ana ka encouraged magpa-blotter. Mahadlok sila mahibal-an ang ilang identity (There are those who come forward. However, they are not encouraged to file a blotter for fear that their identity might be divulged),” Batacan told SunStar Davao in a phone interview.

“Supposedly, tanang police station dapat naay animal (welfare) desk. Pero bisan wala na nga ‘special desk’, makaduol sila kay naa may balaod (Supposedly, all police stations here in the city should have its own animal welfare desk. But despite the absence of the desk, the public have the right to forward their complaints to them because there is an existing law on it),” Batacan said, referring to Republic Act (RA) 8485 or the Animal Welfare Act of 1998.

RA 8485 states fines and imprisonment will be meted against those who subject any forms of animal cruelty such as maltreatment, neglect, abandonment, or killing of any animal for human consumption, except for cattle, pigs, goats, sheep, rabbits, carabaos, horses, deer and crocodiles.

The animal welfare desk is in partnership with ARRF, Department of Agriculture-Davao, Davao City Veterinary Office, and the Police Regional Office (PRO)-Davao.

However, on August 20, Tuesday, a policeman named Master Sgt. Julius Garcia was accused of stabbing a dog to death after he got irritated when he lost in mahjong along A. Pichon Street in Davao City.

Batacan said the alleged suspect’s action “tarnished” the credibility of the police image, who were tapped to be partners in protecting the animals’ rights.

“This despicable act dilutes the relentless efforts of the Davao City Police in establishing Animal Welfare Desks in Davao City police precincts. It shows the lack of respect and inhuman attitude towards animals by a man in uniform who is supposed to be an example of protector of rights. He did not only disrespect the right of the dog owner but wasted as well the life of a poor and hapless animal whose only sin perhaps is being inferior to him,” she said.

Meanwhile, she urged the public to immediately report any animal abuses to the barangays, in case they are hesitant to report it the police, and they will be the ones to forward it.

Batacan also reminded the public that posting on social media, or tagging any animal welfare groups is not taking action.