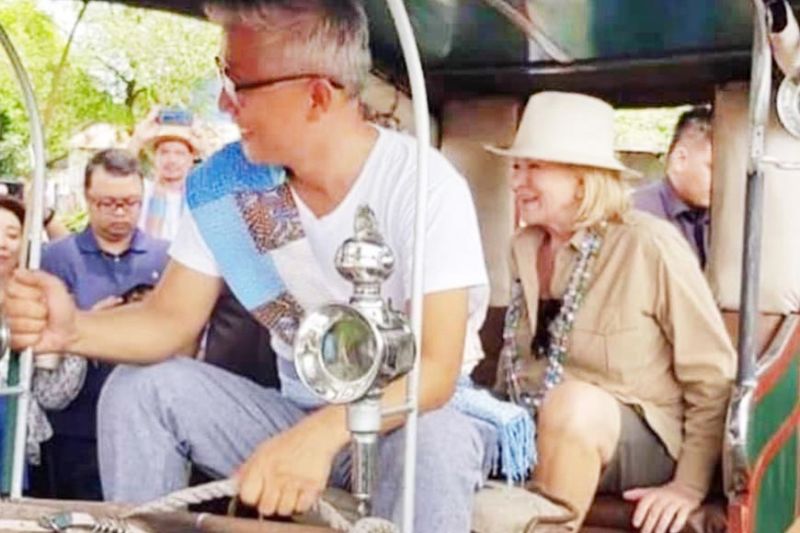 AMERICAN lifestyle and media mogul Martha Stewart visited Barangay San Agustin in Santa Rita town where she was welcomed at the Alviz Farm and treated to the signature Kapampangan hospitality.

Stewart was welcomed by Mayor Ferdinand Salalila and former Miss Saigon choreographer Andy Alviz. Alviz pulled all the stops in welcoming the international celebrity from long tables laden with almost all of the best Kapampangan food offerings to song and dance numbers from local theatre group ArtiSta. Rita, wearing their traditional baro’t saya to a demonstration of the “bayanihan” spirit with men carrying the Bahay-Kubo.

Stewart also gamely participated in the rice planting activity hosted by Alviz near the iconic Balinese-inspired house that is the centerpiece of the Alviz farm. The media mogul waded through rice paddies with her posse of personal assistants.

She was later welcomed at the ancestral home of the Lazatins in the City of San Fernando where she was given a guided tour of the whole house.

The family prepared a gorgeous feast of Kapampangan food and some of the family’s own signature dishes. Stewart was said to have tasted pasta bringhe and taba ng talangka (crab fat) and host of other desserts.

Stewart is in the Philippines to impart a handful of lessons on success, leadership and life during the latest leg of the ANC, the ABS-CBN News Channel’s Leadership Series.