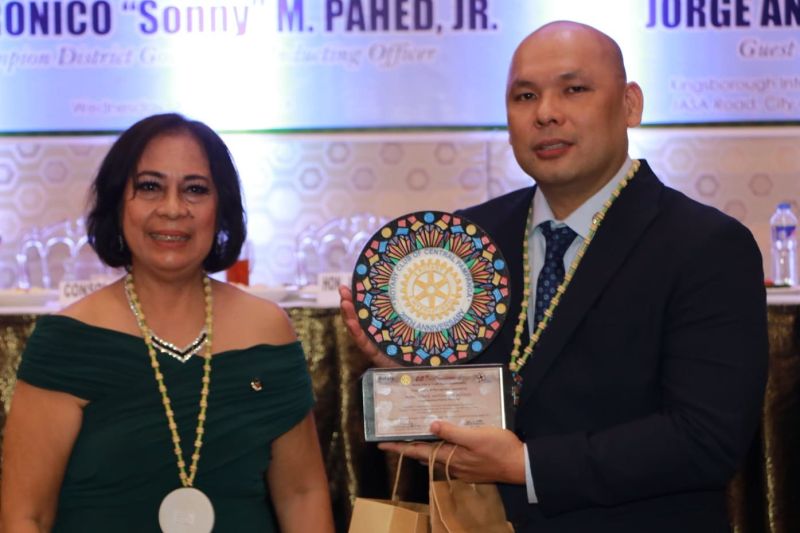 PUBLIC Safety Alliance for Transformation and Rule of Law (Patrol) partylist Rep. Jorge Antonio Bustos on Wednesday, August 21, revealed that the growing party-list group he founded wants to leave a lasting legacy of service that cuts across every community.

In a speech delivered before Rotarians during the 20th anniversary, induction and turnover of newly-elected officers of the Rotary Club of Central Pampanga at Kingsborough International Convention Center in the San Fernando City, Pampanga, Bustos said that despite being young, his group and the organizations it is allied with have already made a mark in some communities.

“Our organizations have immensely contributed to society in so many ways – one commonality is ensuring secure and protected communities so that various areas of growth - economic, social, cultural - shall flourish,” Bustos said.

“When we first conceptualized our party-list organization,” he said, “we were connected with our common desire to help, in whatever way, anyone who was in need, during disasters, during crisis, deterring the proliferation of crime and lawlessness in our communities.”

He recounted their initial members were mostly composed of volunteers coming from all walks of life, from all professions and classes, “working together without much remuneration or expectation of anything in return, because we believed in selfless giving and keeping everyone safe.”

The party-list which earned its seat in the House of Representatives in the recent midterm polls counts educators, businessmen, lawyers and public servants among its members who are primarily concerned with the safety of the public.

It is for this reason, he said, that Patrol up to this day, membership in his party-list group is increasing. “It is becoming clearer that our sense of humanity is alive and will continue on as long as there is a heart beating towards helping and sharing.”

“And currently, as a first-time elected representative in the 18th Congress, I see in front of me now a great partnership, in realizing and moving forward our dreams and aspirations for our members, constituents and for our country,” he said.

Bustos said that as someone who has spent his entire career in the Philippine National Police, he firmly believes that membership in a giving organization, whether in the public or private arena, propels an individual to reach greater heights, “not for self-enrichment, but for the benefit of the common good.”

“And now I completely understand why I am here with you tonight, imparting what I think is the common fibre uniting us all: it is our legacy of service. We serve not because we have to; we serve because we are meant to. It is our destiny. It is our fate. No one can challenge this as it has been written. We live to serve, and to serve is our way of life,” he concluded.

Patrol, founded in May 2015, was envisioned to transform Philippine communities into peaceful, safe and progressive havens through the vibrant partnership among stakeholders supported by a revitalized public safety system. It also aims to craft legislation on fine-tuning and retooling measures that will provide recognition and incentive to public safety front liners in keeping peace and order in communities like policemen, firefighters and those involved in search and rescue operations. (Chris Navarro)