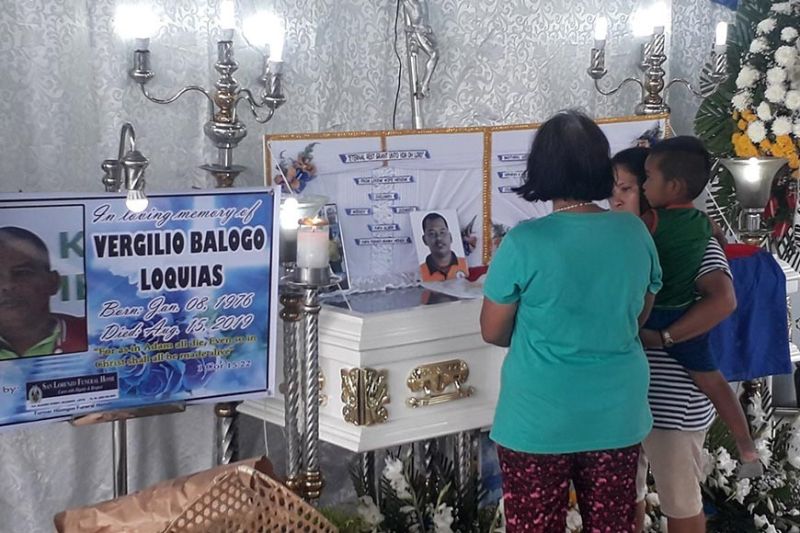 LEYTE. Family members grieve over the death of Vergilio Loquias, barangay captain of San Antonio, Hilongos, Leyte, August 15, 2019. The Mt. Amandewin Command of the New People’s Army (NPA) based in Leyte admitted that they killed the captain in their press statement Friday, August 23. (Photo by Roel Amazona)

The NPA, an armed wing of the Communist Party of the Philippines (CPP), said they “punished” Loquias on August 15 “as penance for his blood debts against the People’s Democratic Government.”

“The decision to put Loquias punish was decided upon by the Revolutionary People’s Court,” the NPA said in an emailed statement to SunStar Philippines.

They accused the 43-year-old barangay captain as “an active member of the Barangay Intelligence Network (BIN) and an organized military asset who was anti-revolutionary and anti-people.”

The victim’s wife, Juana, first reported the incident to the Hilongos Municipal Police Station at 2:30 p.m., August 15, saying that her husband was with his father-in-law and other companions to catch shrimp in a creek.

While they were cooking near the river, four unidentified men armed with guns of unknown caliber approached Loquias and shot him.

The killing of Loquias pushed the local officials of Hilongos to approve a resolution which seek for the setting up of military camp in the upland village of San Antonio to push back the rebels from regaining their old strongholds.

“San Antonio is known to be a place for rest and recreation of New People’s Army who move to other parts of the region to escape heightened military and police operations,” said Hilongos Municipal Administrator Jose Villaflores in a report from state-run Philippine News Agency.

“The people there are not NPA sympathizers and that is why they killed them. Maybe in the 1980s, residents were scared of the NPA, but not now. That is why rebels resort to violence to regain control of these areas,” added Villaflores in the report.

As Loquias’ wife demanded justice for the killing of her husband, Army Major General Pio Diñoso of the 8th Infantry Division also condemned the death of the said barangay captain.

The army division commander assured that justice will be served to the family of the victim.

President Rodrigo Duterte earlier declared the permanent termination of the peace negotiations with the CPP-NPA and its political arm, the National Democratic Front.