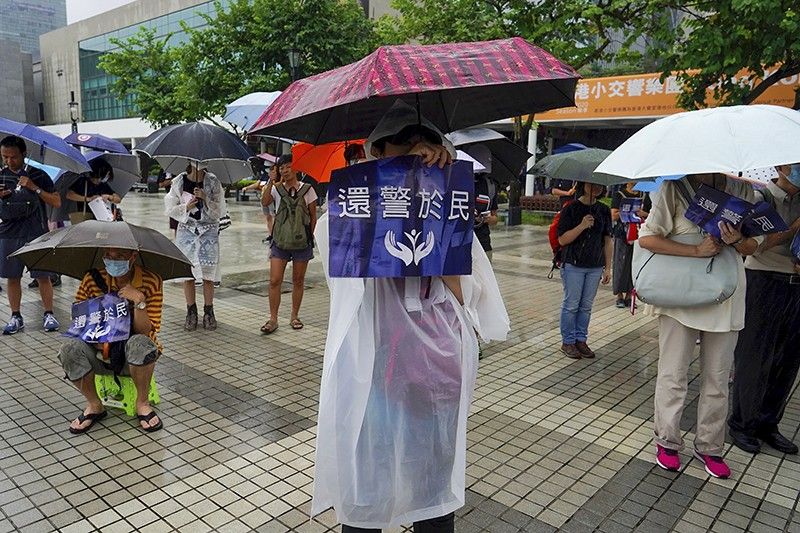 HONG KONG. People carrying umbrellas in the rain hold placards reading "The duty fulfilled by the police belong to the people" as they take part in a rally to support the Hong Kong's Police at Edinburgh Place in Hong Kong, Sunday, August 25, 2019. (AP photo)

HONG KONG — Pro-democracy protesters in Hong Kong filed into an athletic stadium in a steady rain Sunday, August 25, 2019 for another pro-democracy march, one day after clashes with police who used tear gas to disperse them.

Carrying umbrellas, they walked along one side of the running track at Kwai Chung sports ground ahead of the planned march. Others waited under shelter in the stands.

The march in an outlying community in Hong Kong's New Territories was starting near the Kwai Fong rail station, which has become a focal point of protesters after police used tear gas in the station earlier this month.

Protesters have taken to the streets of Hong Kong for more than two months. Their five demands include democratic elections in the Chinese territory and an investigation into police use of force to quell the protests.

A large group clashed with police Saturday after a march in the Kowloon Bay neighborhood, building barricades and setting fires in the streets. Police said they arrested 29 people, from 17 to 52 years old, for various offenses, including unlawful assembly, possession of offensive weapons and assaulting police officers. (AP)