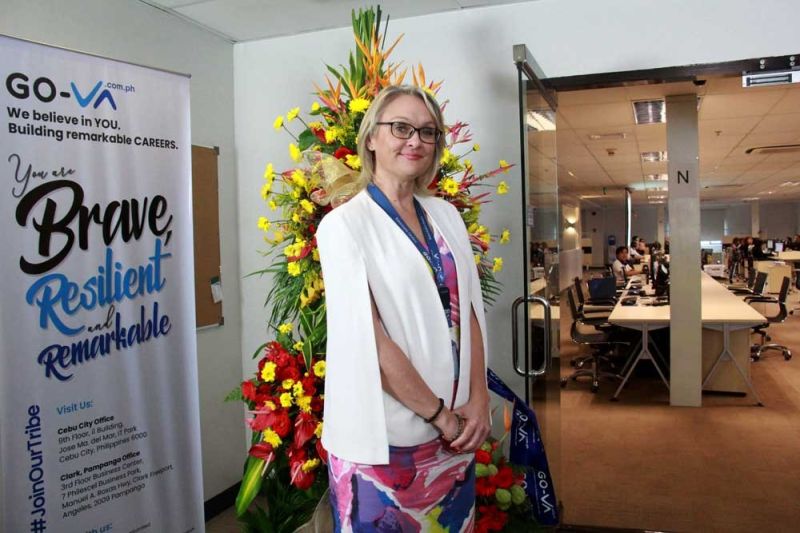 BLESSING. Fiona Kesby, chief executive officer of Go-Virtual Assistants Inc., says the blessing of their new office on the ninth floor of i1 Building at the Cebu IT Park in Cebu City Friday, Aug.23, 2019, comes as the company’s clientele grows. (SUN.STAR FOTO / AMPER CAMPAÑA)

BANKING on the strengthening of the trust of Australian companies in Filipino workers, a managed operations firm has expanded from just one employee to a workforce of 400 and still growing.

Go-Virtual Assistants Inc. (Go-VA) chief executive officer Fiona Kesby said they had seen sustained growth for their industry in the last couple of years since they started in 2014.

“It’s more like a tipping point where more and more people in Australia, in particular, are trusting the Philippines to grow their business and have their offshore team,” she said.

Go-VA handles various tasks for clients from many countries aside from Australia like the United States and the United Kingdom, operating in a range of industries from architecture and property management to financial services, hospitality, information technology (IT) and recruitment.

Kesby said the Filipino’s mastery of the English language and the similarity of culture and time zones contributed to the trust of both a mix of small and big companies in Australia.

“We actually help a variety of industries with a variety of roles so your traditional virtual assistant with administration, outbound sales, customer service, web development, IT support, construction engineering, construction estimators and architectural drafters as well, social media, legal and recruitment assistant,” she said.

Kesby said whatever skill sets the clients are looking for, they are going to the market to look for the individual and introduce this to the clients.

Go-VA moved into its new space in early June, barely two weeks after the team celebrated its fifth anniversary. Its new space in the i1 Building on Jose Maria del Mar St. is its first location in Cebu IT Park.

Go-VA began operations in a room sublet from a business process outsourcing company in Barangay Kasambagan, Cebu City and added another office on A.S. Fortuna St. in Mandaue City as the demand for its services grew.

In addition to its new space, Go-VA also maintains an office in Clark, Pampanga. (JOB / PR)