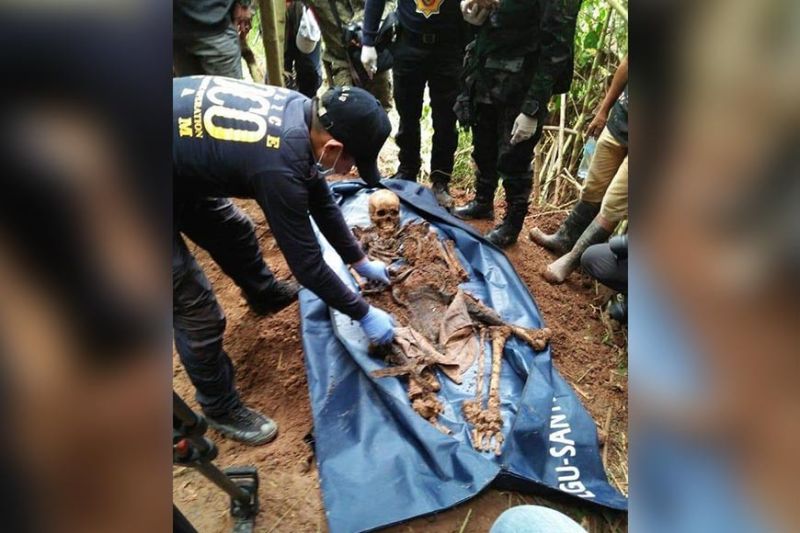 On Friday, August 23, a joint team from the military and police dug out three skeletal remains that had belonged allegedly to a police official, a soldier, and a tribal leader.

The military said the three were believed to have been executed by the NPA.

However, the CPP, the NPA's political front, criticized the military's accusation, claiming that the whole retrieval operation was "second-rate drama."

"Even before they could do proper forensic examinations, the military was quick to claim that the skeletal remains exhumed from the graves belong to a retired policeman, an army sergeant, and a tribal leader who were supposedly taken in by the NPA in a checkpoint in San Fernando, Bukidnon," the group said.

The 89th Infantry Battalion of 10th Infantry Division escorted the relatives of missing persons in Kitaotao, Bukidnon, to verify claims of an alleged witness that their relatives were killed and buried by the NPA in Barangay Digongan.

The CPP denied such claims.

"We have no records of the names Joel Rey Miqu, Dionisio Camarullo Havana, and Sergeant Reynante Havana Espana. The AFP (Armed Forces of the Philippines) itself has not made public any reports regarding these individuals, something they usually do to score propaganda points. Neither will an internet search reveal information that these people were missing or arrested by the NPA," the CPP said in a statement.

The CPP also refuted claims from the families of the victims that they gave money to the captors despite the absence of proof of life.

"It is against the policies of the NPA to demand money for the freedom of its captives, whether prisoners of war or those arrested for trial," the CPP said.

"We can only speculate as to the true story behind the supposed 'discovery' of the graves. Based on past experiences, it is not beyond the AFP to concoct stories of 'mass graves' in its desperation to vilify the NPA. With their communities occupied by armed soldiers, it is not surprising that some local residents are forced to play along with the AFP drama," the statement said.

According to 403rd Brigade Commander, Brigadier General Edgardo De Leon, the killing of the three men proved that the NPA is a terrorist organization, adding that it is the one "perpetrating extra-judicial killings (EJK)".

De Leon said the murder of the three non-combatant men is a violation of the International Humanitarian Law.

"If they would claim that those cadavers were captives, then the more that they are liable for IHL violation, punishable under RA (Republic Act) 9851," he said, referring to the "Philippine Act on Crimes Against International Humanitarian Law, Genocide, and Other Crimes Against Humanity."

"Captives are supposed to be taken care of. If they are sick and wounded, they should be sent to health services provider. Moreover, the datu, who was a civilian, should not have been held captive because he has no direct participation in the armed conflict," he said.

De Leon said an autopsy on the victims' remains may reveal how the NPA carried out the execution.

"But many people have seen how ISIS terrorists execute people, and I am certain that the victims were executed the ISIS way. Therefore, the NPAs are really terrorists, worthy of public condemnation and be declared by communities as persona non-grata," he said.

De Leon also hit progressive groups like Karapatan, whom the military believes to be sympathizing with the CPP-NPA. He dared that the Human Rights group should investigate the incident.

But, Karapatan Secretary General Cristina Palabay said in a statement that they will not comment on any case that are unverified and based on allegations.

Palabay also hit De Leon, pointing out that it is the duty of the army and police to investigate and handle cases like this.

"We do not comment on any case that the facts are have not been verified and are mere allegations. Since the the AFP has so much to say on the issue and with the PNP (Philippone National Police) have taken on the said case, their billions of budget can perhaps be probably enough for them to conduct investigation and handle this case as well, which are all their responsibilities and obligations," she said.

"Just a word of caution: as in other cases where supposed skeletons have been recovered and similar storylines have been dished out by State forces, we are warning the AFP and PNP - do not use this again to illegally and arbitrarily arrest or kill civilians. Masyado nang gasgas yang mga modus operandi nyong ganyan that everything you do is so predictable," she added.

Meanwhile, the military claimed that the NPA is losing ground in Bukidnon after another town, Cabanglasan, condemned rebel atrocities.

In a resolution passed by the town council, local officials enumerated the alleged "inhumane" acts of the communist rebels in Cabanglasan, "including arson, shooting incidents, detonation of anti-personnel mines, ambuscades, and continuous extortion activities to ongoing projects in the area."

"These gruesome acts have affected the peace and order situation of the community. It has also disrupted and immobilized business activities, stifled economic growth that led to discouragement and withdrawal of the potential investors, and caused undue fear to the civilians," the resolution reads.

“We strongly condemn the CPP-NPA terrorist attacks on the lives and properties of the people of Cabanglasan. We are sick of them," Inocando said, referring to the rebels' founding organization, the Communist Party of the Philippines.

Lieutenant Colonel Ronald M. Illana, commander of the Army's 8th Infantry Battalion, lauded the decision of the local officials, describing it as "a proof that the people are now realizing the deceptions of the CNTs (CPP-NPA terrorists)."

"We believe that there will be no more hindrance to the government in delivering basic services," Illana said.