Masbad: Download speed disparity between Manila and everywhere else 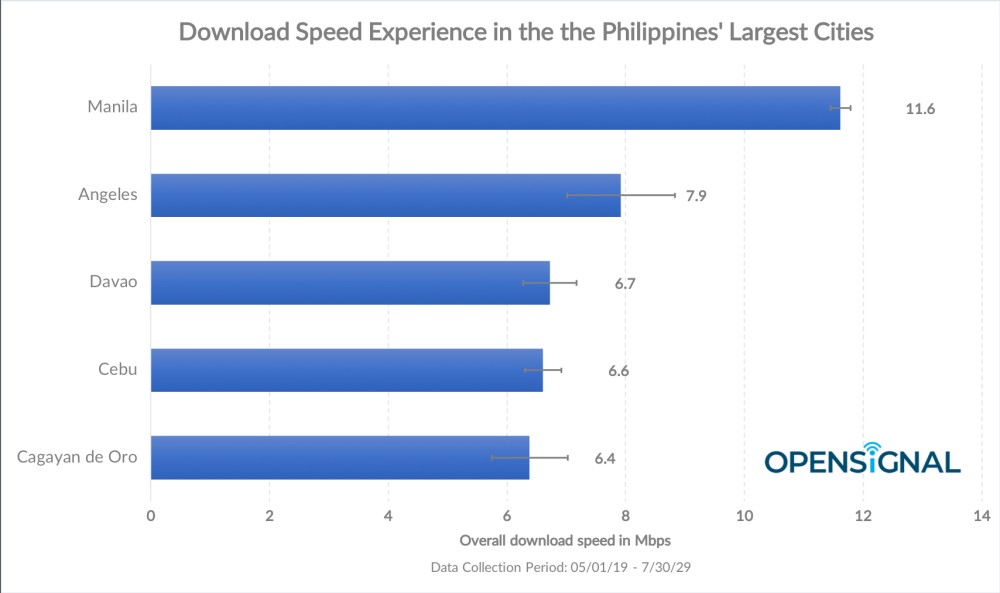 I’m not even surprised by this finding by Opensignal.

If you ask me, this is another affirmation of long-held beliefs that the Metro Manila areas will always get the bigger, better kind of service from whatever utility. Sure, the past few years have been a direct contra to these beliefs of “central” Manila and everywhere else is secondary. It’s a good thing, don’t get me wrong. I guess my point being is that it should not have been that way since the beginning. Alas, it isn’t the reality at all.

Going back to that report by Opensignal published in their blog recently.

Let’s start off with this chart on download speed experience.

Manila experience is at 11.6Mbps. And the others are all below 8Mbps. In fact, Davao’s average speed is 4.9Mbps less than that of Manila’s. That may not mean much for some but if you start thinking about productivity and how that slower speed affects businesses across the city or region, then you being to grasp its effect.

And once you have that inkling, multiply that by the factor that a lot of us today, rely so much on mobile data connections. We search online where to eat. We go online when we like to order food and have it delivered. We go online to pay bills or transfer funds. We go online to get connected with family and friends. I’m betting that a lot of us don’t even make regular phone calls anymore because we’d rather call people up via whatever online messaging platform you’re on.

Opensignal’s report goes on to say that:

Manila isn't just the population center of the Philippines, it's the cultural, economic and political hub as well. But Angeles, Cagayan de Oro, Cebu and Davao are hardly small towns. They all, with the exception of Angeles, have metro-area populations well over 1 million; they're all important regional business hubs; and many of them serve as the administrative centers of their regions. The Philippines clearly has two tiers of speed when it comes to urban areas: there's Manila and there's everyone else.

It can’t be any truer. Cebu, Davao and Cagayan de Oro are not your small, provincial towns. These are regional hubs. It’s as bustling as it can be relative to Metro Manila.

I’d like to believe that all our telco giants today are scrambling to be able to catch up with the demands of these regional hubs and cities outside of Metro Manila. I’m still hopeful that the country’s current crop of telcos are investing and rolling out more and better cell sites to be able to blanket more areas. And more than just coverage, be able to raise the bar of service when it comes to providing fast, reliable mobile internet connections at speeds comparable to that of our top-tier neighbours like South Korea and Singapore.