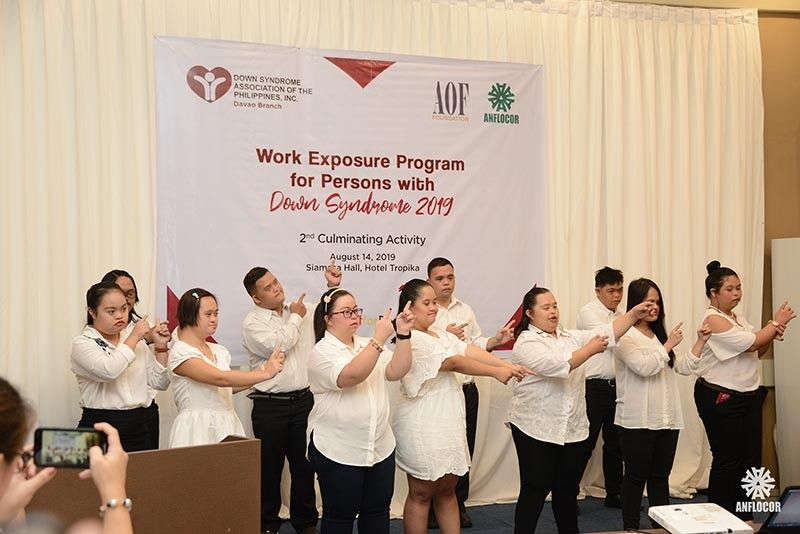 Interns performed a special performance number for the guests during the culminating activity of the Work Exposure for Down Syndrome. (Photo by Anflocor) 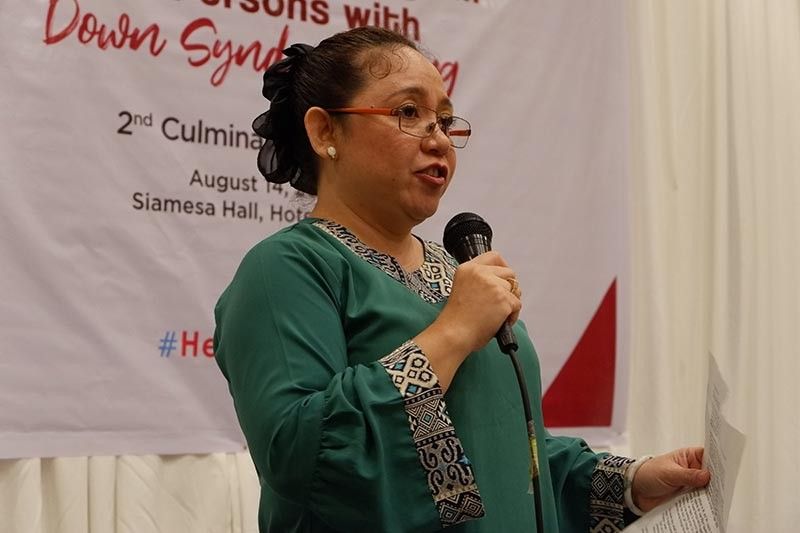 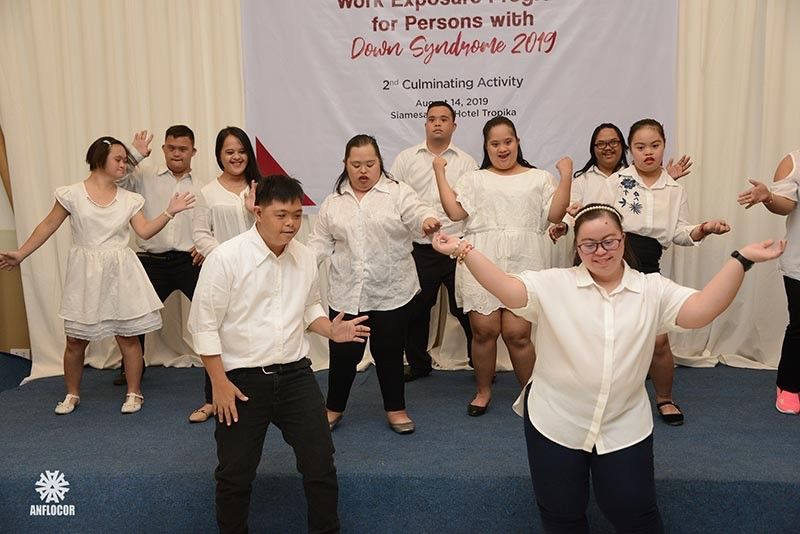 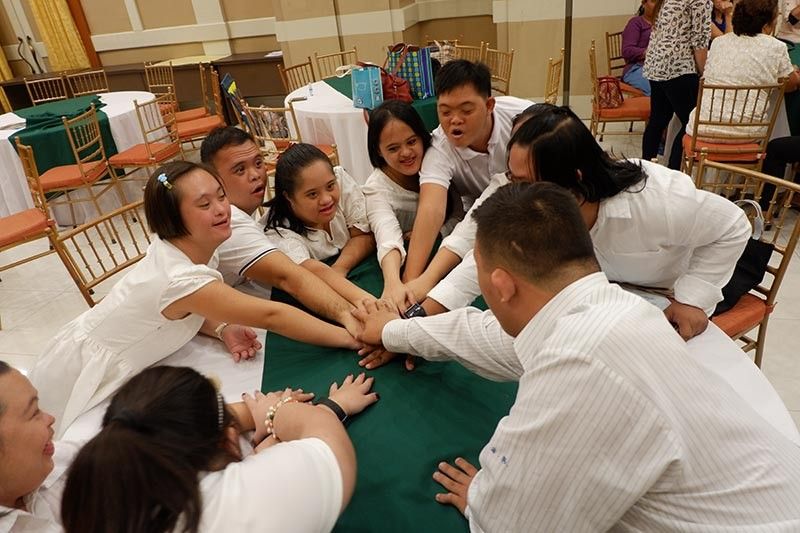 Successful on-the-job trainees of the Work Exposure for Down Syndrome program joint forces as they celebrated their accomplishments for overcoming the internship for the past six months. (Photo by Ralph Lawrence G. Llemit) 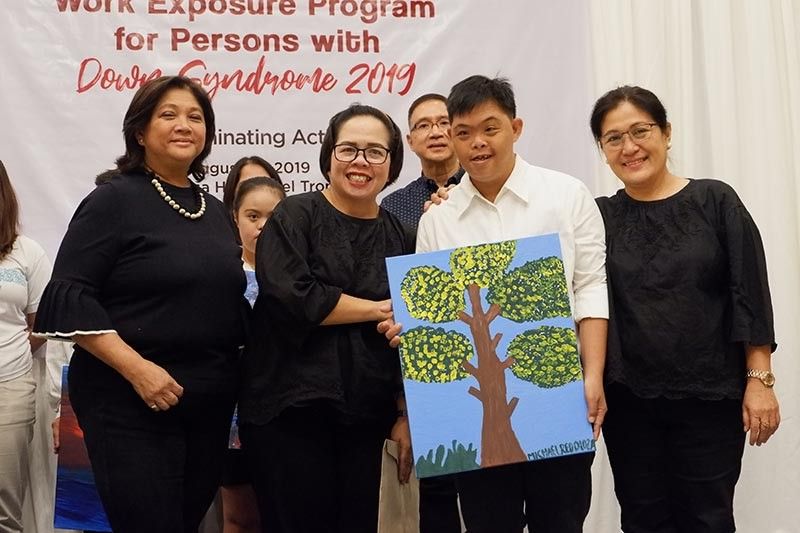 Department heads and supervisors were given a special token from the interns as a thank you gift for the trainings and exposures given to them for the past six months. (Photo by Ralph Lawrence G. Llemit)

LOOK at their ability and not at their disability.

This has been a long time rally of the Down Syndrome Association of the Philippines, Inc. (DSAPI) for more than 20 years.

Like other persons with disability (PWDs), persons with Down syndrome are being isolated from the real world – from daily human interactions to employment opportunities.

According to DSAPI, one in every 800 babies born has Down syndrome worldwide, or around 1,875 cases a year in the Philippines in a population of 1.5-million live births. However, the figure continues to rise, while others remained to be undocumented.

But why is society pulling down persons with Down syndrome?

According to the World Health Organization (WHO), Down syndrome is a type of mental retardation caused by extra genetic material in chromosome 21. This can be due to a process called non-disjunction in which genetic materials fail to separate during a crucial part of the formation resulting in extra chromosome called trisomy 21. This leads to Down syndrome, which results in developmental delays and physical features typical of the disorder.

The cause of the non-disjunction is still unknown although it has been linked to a woman’s age as studies have shown that the chances of having a child with Down syndrome increases as a woman gets older especially after the age of 35.

Although one thing is certain, it is not related to race, nationality, religion or socioeconomic status.

While some question their capabilities of being effective working force of the employment sector, one renowned Davao City-based firm saw their potential and gave them a shot to be an asset of the corporate world.

On August 14, 11 interns successfully completed the six-month internship program of the partnership of DSAPI-Davao chapter, Anflo Management and Investment Corporation (Anflocor) and the Don Antonio O. Floirendo Foundation (AOFF) on their Work Exposure for Down Syndrome program.

AOFF president for hospitality and corporate social responsibility operations Maricris Floirendo-Brias, in her speech during the culmination activity of the work exposure program, that the company is glad they were able to produce the second batch of interns under the program.

Floirendo-Brias acknowledge the program’s importance especially for Down syndromes who seek for opportunities in the corporate world.

“With this work exposure program, we understand they need to earn a bit. This was a break they needed, and it has opened opportunity for members (of DSAPI),” she said.

She also proudly shared that Anflocor is the only company to offer a six months on-the-job training.

Among those who were privileged to be in the program is Kim Lorenz Laniba, 18.

Kim’s mother, Angela, shared how her youngest son is very special to her despite having a rare condition.

“I never treated him different. The same way with his older siblings,” Angela said.

She never doubted his son’s capability to land on an internship because she already saw her son being used to do various tasks.

Kim, previously, landed an internship stint at a dormitel, which served as his credentials to land another internship. This time, at Pearl Farm Resort.

When asked how his internship went, he answered, “Pool. Happy. Swimming,”. Kim’s mother quickly answered, saying he already missed his stay wherein he get to enjoy the view, especially the swimming pool.

“Kim was all around there, from the front desk to other services,” Angela said.

Meanwhile, Ela Aguinaldo, supervisor of T’nalak Homes, shared how they were fortunate to be a first time partner establishments of the program.

Michael Redoloza, another Down syndrome person included in the work exposure program, was assigned to T’nalak Homes.

Aguinaldo shared how Michael became their source of inspiration when they go to work everyday.

“Michael is always early, even before the mall opens, he is already there,” she said.

Aguinaldo said Michael brought life while being inside the store. She also said even the mall security guards had also been his friend, in return, they won’t even ask for his I.D.

“They feel so stressed free, whenever Michael is around. We consider Michael as our baby in the store because everyone in the store is his friend,” she said.

She also said people like Michael are “employable” for they are responsible in the task delegated to them.

DSAPI-Davao Manager Lanie Vergara is thankful for the opportunity given to their members for the second time.

Vergara said they hope other members, which of their latest tally is around more than 1,000 in the entire Mindanao, would be given an opportunity as experienced by Kim and Michael.

While she admitted not all of the graduate interns would be fully employed immediately, she said some of the previous interns were immediately absorbed and selected by some firms in the city.

Alvin Redulosa, graduate of the first batch, is currently working at the City Social Services and Development Office (CSSDO). He is also the first Down syndrome person to reach the summit of Mt. Apo, the tallest mountain in the country.

“It was once a dream that persons with Down syndrome be given job related job opportunities and be treated with equality in the society,” Vergara said.

While the state recognizes their capabilities, as stated under Republic Act 9442 or the Magna Carta for Disabled Persons, And for Other Purposes”, the scarce of opportunities for people like them continues to be a dilemma.

But for companies like Anflocor who fully believed in their capabilities of being in the frontliners in the corporate world, little by little, doors are now opening for them.

Vergara also called on the public to take a stand against ignorance and waste of human potential, by considering people like everyone else.

She also called other parents whose kids have Down syndrome to feel free and reach out to DSAPI for intervention and support.

For the parents, Angela said, “Their existence has a purpose. Love them to the fullest extent”.