The return of the ‘festival of festivals’ 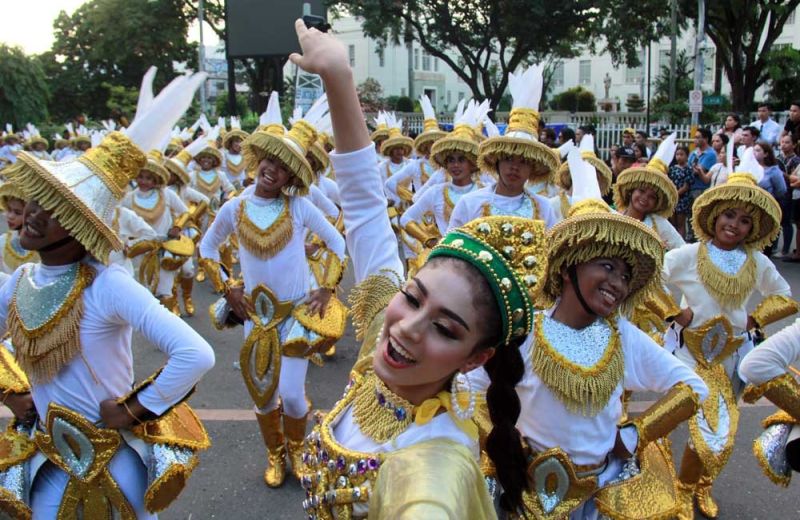 PARADE OF PRIDE. It’s a long walk from the Cebu Provincial Capitol to the Cebu City Sports Center, especially when you’re in costume and carrying props. But for the contingent from the southern town of Sibonga (above) and the 43 other participants in this year’s Pasigarbo sa Sugbo on Sunday, Aug. 25, 2019, it was a chance to show off their town or city’s culture and heritage. (SunStar Cebu / Amper Campaña)

SOME endured hours of travel by land, while some had to make a sea crossing. They practiced during the day and sometimes late into the night to perfect their moves. They were doing it to promote their culture. Their heritage.

They were participants in the Pasigarbo sa Sugbo 2019, a celebration that showcases different festivals in Cebu Province, which kicked off with a street dancing from the Capitol grounds at 2 p.m. on Sunday, Aug. 25, 2019.

Contingents from 44 municipalities and cities in Cebu trooped to the Cebu City Sports Center (CCSC). There, they wooed thousands of spectators with their unique stories, colorful costumes and original choreography and music during the ritual showdown.

Unlike the Sinulog Festival, which pays homage to the Señor Sto. Niño, the Pasigarbo sa Sugbo showcases each participating local government unit’s own festival.

The event, which took a six-year hiatus during the administration of former governor now Vice Gov. Hilario Davide III, was one of the highlights of the month-long celebration of the 450th founding anniversary of Cebu Province.

It was a flagship tourism and culture program of Gov. Gwendolyn Garcia during her earlier stint as governor.

“After six years of absence and in time for our celebration of Cebu’s 450th founding anniversary, with a profound sense of joy and pride, I declare that the Pasigarbo sa Sugbo, festival of festivals, is back,” she said.

The cities of Bogo, Carcar, Mandaue, Naga, Talisay and Toledo also joined. Only Danao City and the towns of Tudela, Tabuelan and Boljoon did not participate.

The top prize amounts to at least P1 million.

To ensure the safety of contingents and spectators, the Cebu City Government directed the Cebu City Police Office (CCPO) to implement City Ordinance 1929, which penalizes drunkenness in public areas.

The liquor ban was in effect between noon and midnight or until the ritual showdown was completed.

Police Major Clark Ariola, acting information officer of the CCPO, said as of 6:30 p.m., they hadn’t apprehended any violator of the anti-drunkenness ordinance.

“Our communication with the community is good and we’ve been doing this since Sinulog times and also we have hosted international events in Cebu already. So the Cebuanos are already aware of the rules and are cooperative,” he said.

One of the spectators at the grandstand waited hours for all the contingents to arrive. Grace (not her real name) said she would not leave until she watched all of them perform.

“Here, you don’t have to go to the places to see their festivals. The festivals come to us instead,” she told SunStar Cebu. (RTF, WBS)