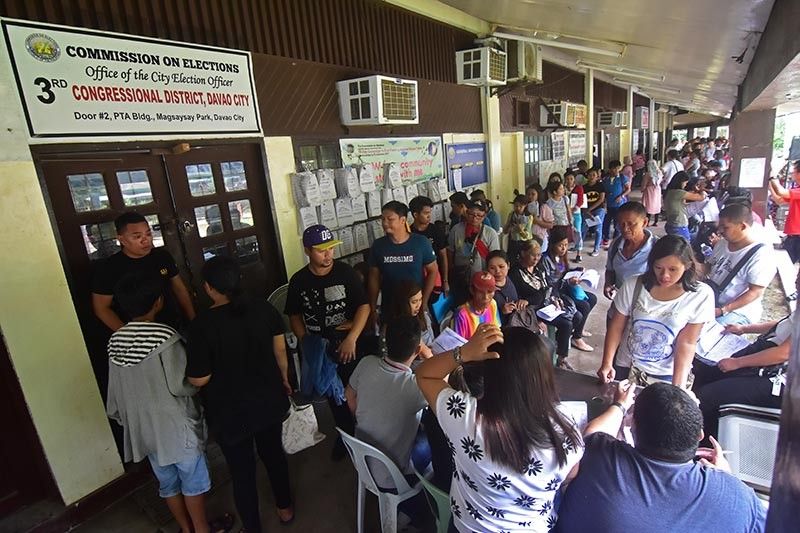 DAVAO. Hundreds of Dabawenyos from the three congressional districts troop to the Commission on Elections office at Magsaysay Park in Davao City during yesterday’s first day of the voter’s registration. (Photo by Macky Lim)

THE Commission on Elections (Comelec)-Davao encourages Dabawenyos to maximize their satellite registration to avoid rushing in during the deadline of the 2020 Barangay and Sangguniang Kabataan Elections (BSKE) registration.

Comelec started accepting registration of new voters and other voter-related registration in preparation for the next election last August 1 until September 30.

“The purpose of this satellite registration is to give convenience to our people so they won’t have to go here at our office here at Magsaysay (Park),” Mujal said.

Mujal said that satellite registration is pursuant to Comelec Resolution 10549 which aims to “ensure wider voters’ participation”, along with extensive and massive information and education campaign.

Meanwhile, Comelec has updated the date and venue of its satellite registration schedule as of August 15.

Meanwhile there will be no registration at the Magsaysay Park office on the said dates per district.

Applications may be filed from Mondays to Saturdays, 8 a.m. to 5 p.m., at the Office of the Election Officer or any satellite registration site in the locality where the registrant resides.

Comelec election officer in the city Krisna Caballero said, in a previous report, they no longer accept cedula and police clearance as proof of identity. Meanwhile, live birth certificate will only valid for SK elections.

She said they are expecting more applicants despite a short period of time.