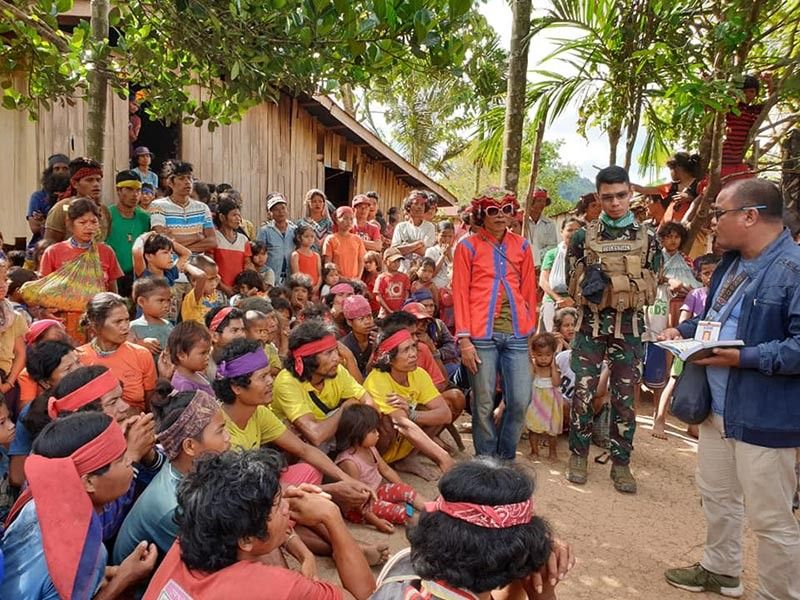 DAVAO. The Department of Social Welfare and Development (DSWD)-Davao visited Sitio Tapayanon, a geographically isolated and disadvantaged area situated at the boundary of Bukidnon, Agusan del Sur, and Davao del Norte. The agency conducted an ocular visit to determine what assistance to extend based on the problem presented by the community. (Photo credit to DSWD Provincial Operation Office of Davao del Norte Facebook page)

A REMOTE and isolated tribal village that the military accidentally discovered in Mindanao while chasing communist rebels early this year will finally benefit from government services beginning this year.

He said the caravan will give the residents an opportunity to avail of the services of the government, including medical and education.

“The area has long been deprived with the government services for a long time. Hopefully, we could have more assistance to give to them in the long run,” Tapia said on Saturday, August 24, during the Davao Media Forum at Penong’s-Sta. Ana Avenue branch.

Sitio Tapayanon, a geographically isolated and disadvantaged area situated at the boundary of Bukidnon, Agusan del Sur, and Davao del Norte, was discovered by the 60th Infantry Battalion (IB) of the 1001st Infantry Brigade in April this year during a manhunt operation against members of the New People’s Army (NPA).

The area, according to the military, used to be a territory of the NPA.

In a previous report, 60th IB officer Lieutenant Amadeuz Vincent John Celestial said the troops accidentally discovered the area when they crossed the political and administrative boundaries and went outside the boundaries of their area of operations while running after the enemy in February this year.

Celestial said they were not familiar with the terrain when they accidentally came across the tribal village. Fortunately, they were not engaged in a firefight.

In May, the military, together with 30 regional heads, provincial heads, and representatives of various agencies conducted the “1st Multi-Stakeholders Coordination and Planning Conference”.

Some of the issues and concerns that need immediate actions raised during the consultation were civil registration, malnutrition, basic education, health concerns of the elderly and children, registration of Indigenous Peoples (IP) political structure, inclusion of ancestral domain, and hygiene and sanitation.

Department of Social Welfare and Development (DSWD)-Davao IP focal person Audrie Perez said the agency is now looking into providing long-term solutions in the area, including providing livelihood assistance to them.

He said the DSWD has been conducting ocular visits since April 24 to determine the needed assistance to be extended based on the problem presented by the community.

Perez said they are proposing the establishment of a water system in the area to provide potable water to the residents.

“It is important that the area will have a clean access to water because most of the residents are getting sick because of the unsanitary water they are getting,” he said.

He added that the government is now scouting for a potential water source in the area, adding that they will be creating a proposal for its creation soonest.

Perez also said the Department of Education (DepEd)-Davao pledged to establish the Tapayanon Elementary School next year, adding that this is to prevent the Salugpongan Ta’tanu Igkanugon Community (Salugpungan) from entering the area.

Salugpungan had been suspended by DepEd since July this year after reports that the school is being operated by NPA.