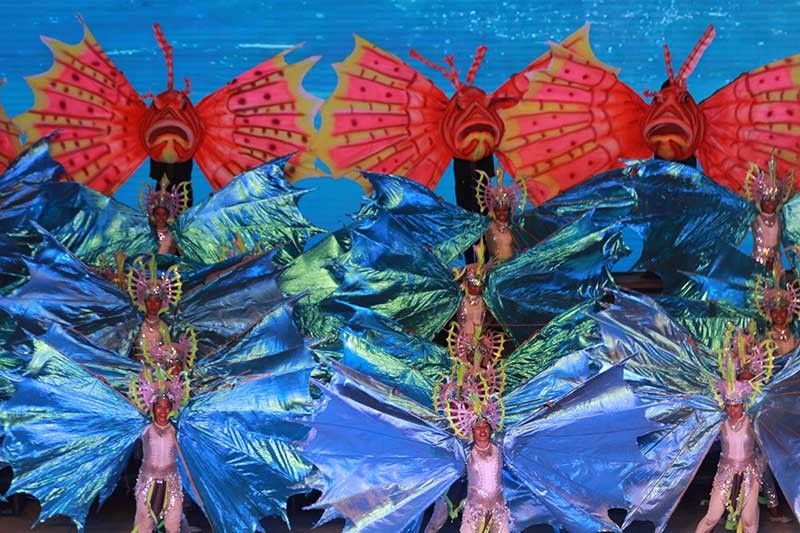 CAN you imagine what Cebu would be like without the famous “chicharon,” “ampaw” and “bukarilyo” of Carcar City?

The “chicharon” (fried pork rinds), “ampaw” (pop rice) and “bukarilyo” (sweets made of young coconut and sugar) are some of the popular delicacies of the southern city.

These mouthwatering treats are sources of pride not only for residents of Carcar, but for the province as well as these are favorites of both locals and tourists.

For Kathryn Estenzo, there is a much greater source of pride in Carcar that should be showcased in the province, too.

“If we are very proud of these products in our place, why not be proud of the people in your place? There won’t be any products without people. Who makes the ‘bukarilyo’ and ‘ampaw’? It’s the people, right? Be proud first of the people living in the community,” she said on Monday, Aug. 26, 2019.

This distinctness along with fluidity, charm and synchronized moves earned the contingent from Carcar City a grand slam victory in the 2019 Pasigarbo sa Sugbo on Sunday, Aug. 25.

Carcar was up against 43 other contingents, including Consolacion, the reigning Sinulog Free-Interpretation champion.

A flagship tourism and culture program of Gov. Gwendolyn Garcia during her earlier stint as governor, Pasigarbo sa Sugbo is an annual exhibition of festivals participated by towns and component cities in the province.

The event, which took a six-year hiatus during the administration of former governor now Vice Gov. Hilario Davide III, was one of the highlights of the month-long celebration of the 450th founding anniversary of Cebu Province.

Unlike the Sinulog Festival, which pays homage to Señor Sto. Niño, the Pasigarbo sa Sugbo showcases each participating local government unit’s own festival.

Estenzo, the team’s artistic director, said they wanted to show that Carcar is also a community of music lovers.

Unlike other participating towns and cities, Carcar’s presentation of the Kabkaban Festival did not show any of their delicacies.

Instead, it showed spectators a different side to Carcar by highlighting how a mother’s simple lullaby nurtured a deeper appreciation for music.

“We wanted to emphasize on the delivery of the story that even a small child will be able to understand our presentation,” Estenzo said.

Carcar did not only win the grand prize award in the ritual showdown, it also bagged the best in costume, best in festival jingle and topped the street dancing contest.

Alforque was also crowned as Sinulog Festival Queen in 2017 when she represented her hometown. She was later hailed Reyna ng Aliwan in the same year.

With Carcar’s recent feat, it seems that there is no stopping the city from becoming a lead cultural contender in the province.

With their outstanding track record, Estenzo admitted feeling a lot of pressure when they prepared for the Pasigarbo sa Sugbo.

Unlike the Sinulog where they had more time to practice, Pasigarbo contingents only had a little over a month to prepare for the “festival of festivals” after the governor announced its comeback in July.

“Actually, our concept for the Pasigarbo was supposed to be presented (in) this coming Sinulog. But due to the declaration of our active governor, I gave way for my concept and I’ll just make another one for Sinulog,” Estenzo said.

Preparing for next year

The Panagtagbo Festival of Mandaue City, on the other hand, won the best in andas award.

The Province had initially allotted only one spot for the street dancing category and five slots for the ritual showdown.

But Garcia decided to double the slots for the ritual showdown and to increase to five the winning spots for the street dancing category after witnessing the kaleidoscopic performances of the contingents.

In a related development, organizers are mulling over the possibility of holding a workshop with choreographers to improve next year’s presentation.

Provincial Tourism Officer Maria Lester Ybañez said they want to regulate the number of props to avoid lags in the program flow, among other things.

The ritual showdown started at 7:25 p.m. and the program officially wrapped up at almost 3 a.m. the following day.

Ybañez said they also had to consider the number of contingents and the props they needed. That was why the program had to start in the evening since the venue was an open area.

They also observed that some spectators were not able to get inside the Cebu City Sports Center because there were already too many people inside. A possible solution is to set up screens outside of the venue so more spectators can witness the event.

Award-winning choreographer and stage director Victor Cuenco suggested grouping contingents into the north and south for a preliminary contest and those that will emerge on top will compete for the grand prize.

“We want to try to have a year where all our towns and cities can participate... It was considered before but then again, it’s more favorable for the governor to hold it in one time so that everyone can have the same chances (of winning). We’re one Cebu, so we should also be One Cebu in aiming for the top,” Ybañez said.