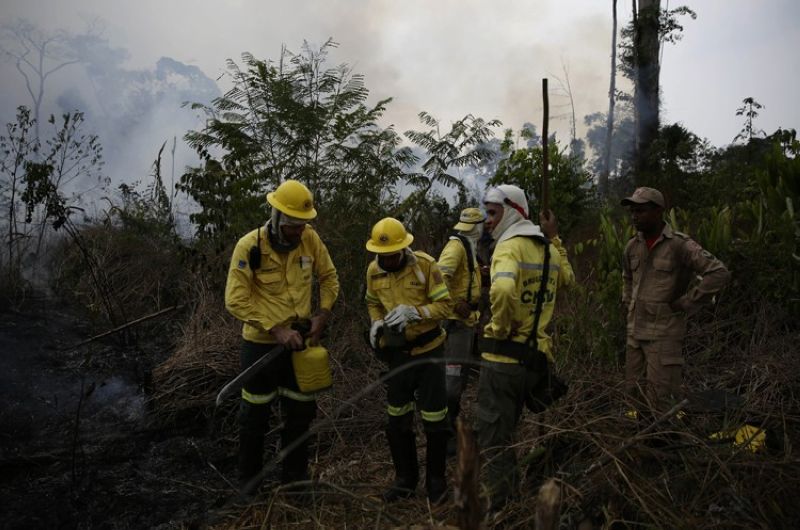 Firefighters rest briefly as they put out fires along the road to Jacunda National Forest, near the city of Porto Velho in the Vila Nova Samuel region which is part of Brazil's Amazon, Monday, August 26, 2019. The Group of Seven nations on Monday pledged tens of millions of dollars to help Amazon countries fight raging wildfires, even as Brazilian President Jair Bolsonaro accused rich countries of treating the region like a "colony." (AP)

PORTO VELHO, Brazil -- The Group of Seven nations on Monday, August 26, pledged tens of millions of dollars to help fight raging wildfires in the Amazon and protect its rainforest, even as Brazilian President Jair Bolsonaro accused rich countries of treating the region like a "colony."

The international pledges at a G-7 summit in France included $20 million from the group, as well as a separate $12 million from Britain, and $11 million from Canada. Ottawa has also offered to send firefighting planes to Brazil.

Other groups are contributing support for a region whose rainforests are a major absorber of carbon dioxide from the atmosphere. Earth Alliance, a new environmental foundation backed by Leonardo DiCaprio, is pledging $5 million in aid, saying the Amazon is one of the "best defenses" against climate change.

The funds are widely seen as critical support, but a relatively small amount for dealing with an environmental crisis of such scale threatening what French President Emmanuel Macron called "the lungs of the planet."

More than $1 billion, for example, has been paid into a fund to help the Amazon in the past decade. And major donors, Germany and Norway, recently cut donations to Brazilian forestry projects, saying Bolsonaro's administration isn't committed to curbing deforestation.

It was unclear how exactly the new money would be administered. Bureaucracy can slow and reduce the amount that reaches programs in the field. Brazil's environment minister, Ricardo Salles, said the aid was welcome and that Brazil should decide how the resources are used.

More global funding and political will in Brazil will be needed once the fires are extinguished, said John Robinson, chief conservation officer at the Wildlife Conservation Society.

Brazil needs "legislation and regulations that set clear limits preventing landowners — especially large ones — from burning the forest and converting it to agriculture and rangeland, backed by incentives and investment in alternatives," Robinson said.

The international pledges came despite tensions between European countries and the Brazilian president, who suggested the West was angling to exploit Brazil's natural resources.

"Look, does anyone help anyone...without something in return? What have they wanted there for so long?" Bolsonaro said.

Bolsonaro has insulted adversaries and allies, disparaged women, blacks, and gay people, and praised his country's 1964-1985 dictatorship. But nothing has rallied more anger at home and criticism from abroad than his response to the fires in parts of the Amazon region.

The Brazilian leader said he is committed to protecting the Amazon and prosecuting anyone involved in illegal fires, many of which appear to be to have been set in already deforested areas to clear land for farming.

But Bolsonaro initially questioned whether activist groups might have started the fires in an effort to damage the credibility of his government, which has called for looser environmental regulations in the world's largest rainforest to spur development.

"We believe that there are many mining companies and lumber companies and farmers who feel that the president has their backs," said Raoni Metuktire, a Brazilian indigenous chief and environmentalist who traveled to the G-7 summit in Biarritz.

In response, European leaders threatened to block a major trade deal with Brazil that would benefit the very agricultural interests accused of driving deforestation.

The impact of the fires and smoke has disrupted life for many in the Amazon region. The airport in Porto Velho, the capital of Rondonia state, was closed for more than an hour Monday morning because of poor visibility. On Sunday, a soccer match of a lower-tier national league was briefly suspended because of smoke in Rio Branco, capital of Acre state, as fire burned in a field outside the stadium.

In Para state, where fires have swept many areas, resident Moacir Cordeiro said he was worried about their impact on nature and his health. Smoke rose from nearby trees as he spoke.

"I don't think there are enough people to extinguish the fires," said Cordeiro, who lives in the Alvorada da Amazonia region. He said it was difficult to breath at night because of the smoke.

"Nature shouldn't be killed off like that," he said.

Macron said the Amazon, while mostly Brazilian, is a world issue and that his message to Bolsonaro is: "We cannot allow you to destroy everything."

Brazil's sovereignty must be respected, Macron said, but the world can help Brazil reforest and build its economy "while respecting the natural balance."

About 60 percent of the Amazon region is in Brazil; the vast forest also spans parts of Bolivia, Colombia, Venezuela, Ecuador, French Guiana, Guyana, Peru, and Suriname.

Speaking on French TV after hosting the G-7 summit, Macron acknowledged that Europe, by importing soya from Brazil, shares some blame for the agricultural pressure on the rainforest.

He added that Europe's dependence on imported proteins, including soya, for animal feed is "a very bad choice" and that he wants Europe to develop alternate sources of protein.

Bolsonaro has accused Macron of treating the region "as if we were a colony."

Bolsonaro has announced he would send 44,000 soldiers to help battle the blazes, and military planes began dumping water on fires in the Amazon state of Rondonia.

The move was welcomed by many critics, but some said it's not enough and comes too late.

In violating environmental agreements, Brazil has been discredited and "unable to exercise any type of leadership on the international stage," said Mauricio Santoro, an international relations professor at Rio de Janeiro State University.

Critics said the large number of fires this year has been stoked by Bolsonaro's encouragement of farmers, loggers, and ranchers to speed efforts to strip away forest. Although Bolsonaro has now vowed to protect the area, they say it is only out of fear of a diplomatic crisis and economic losses.

Fires are common during Brazil's dry season, but the numbers surged this year. The country's National Space Research Institute, which monitors deforestation, has recorded more than 77,000 wildfires in Brazil this year, a record since the institute began keeping track in 2013. That is an 85 percent rise over last year, and about half of the fires have been in the Amazon region — with more than half of those coming just in the past month.

Rómulo Batista, a member of Greenpeace Brazil's Amazonia Campaign, said "the rise in deforestation can completely alter the rain patterns by region and devastate agriculture, even in South America."

Brazil's federal police agency announced that it would investigate reports that farmers in Para state had called for "a day of fire" on August 10 to ignite fires. Local media said a group organized the action over WhatsApp to show support for Bolsonaro's efforts to loosen environmental regulations. (AP)