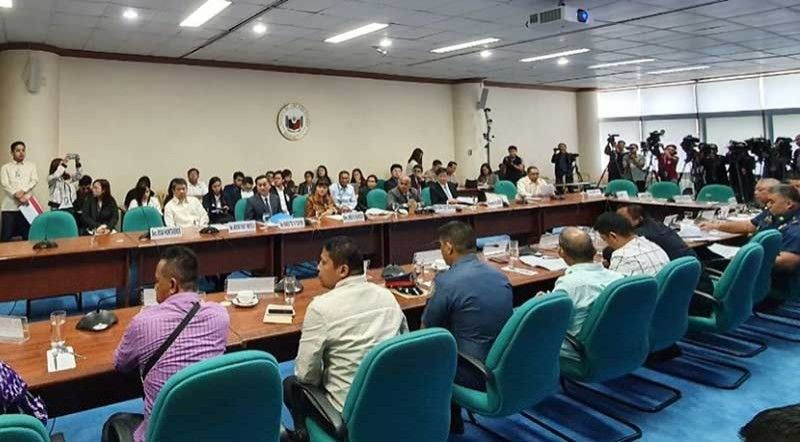 SENATOR Ronald "Bato" dela Rosa on Tuesday, August 27, urged the Central Visayas police to provide protection to 10 individuals on an alleged hitlist drawn up by an anti-communist group in Guihulngan City, Negros Oriental.

Dela Rosa said both the police and local government officials should work together in ensuring that those on the hitlist who are still alive will stay alive.

Both Degamo and Sinas gave assurance that they will investigate Kagubak and provide protection to those on the hitlist.

The hitlist contains 15 names of alleged supporters of the communist New People's Army (NPA). Five have been killed, according to Guihulngan Police Chief Bonifacio Tecson.

They were Anthony Trinidad, Roberto Caday, Heidi Flores, Boy Litong and his son.

Tecson told the Senate committee during a hearing Tuesday on the Negros Oriental killings that he received a copy of the alleged hitlist in January or February 2018.

Most of those on the list also went to the police station to clear their names, including Jessica Villarmente and her husband Carlos.

Jessica Villarmente is a Guihulngan City councilor and older sister of Trinidad.

Sinas, for his part, said he received a copy of the list last year, but concluded that it was political in nature because it was circulated before the elections.

"We concluded then that it's more of personal matters and election-related," Sinas told the committee.

"First, we do not know who are these people," Sinas said, replying to the query of Senator Ana Theresia "Risa" Hontiveros on whether an investigation was conducted.

Dela Rosa said it is important that Kagubac and its members are identified.

"What if mali ang listahan (the list is wrong)? Or kahit supporter pa sila ng NPA (even if they are NPA supporters), they don't deserve to die," Dela Rosa said.

"I could assure you 100 percent that we are not supporting (Kagubak). I assure you no PNP personnel is involved. Kung meron man (If there are), I assure you we will investigate and present them," Sinas told Dela Rosa.

In a presentation, Sinas told the committee that they recorded 11 killing incidents in Negros Oriental after four young police officers were executed by the NPA on July 18, 2019 in Barangay Mabato, Ayungon town.

The execution of the four officers enraged President Rodrigo Duterte, who offered a bounty of up to P6 million on the heads of the killers.

From July 23 to July 28, a total of 15 other people including a one-year-old child were killed.

Only four were believed to have been killed as reprisal by the NPA, Sinas said. They were Alipan, Sabejon, Ocampo, and Eleuterio.

Ocampo's one-year-old son Marjon was also killed in the attack in violation of the International Humanitarian Law.

Sinas said they conducted "Oplan Branstark" on July 24 to August 2 to track down the killers of the four policemen in Ayungon.

Bran Stark is a character in popular television series Game of Thrones.

As of Tuesday, he said they have arrested nine people and filed four counts of murder before the prosecutor's office.

Of the 11 cases of shooting after four have been "cleared" and cases have been filed against the suspects, Sinas said.

A separate case of violation of the International Humanitarian Law was filed in Mandaue City in connection with the killing of the one-year-old child.

The four cases that have been "cleared" were those of Alipan, Sabejon, Ocampo father and son, and Alegre and Janayan double murder.

Still under investigation are the cases of Enardecido, Eleuterio, Jalandoni, Posadas, Asturias, Bayawa siblings and Trinidad.

Sinas said they were looking at land conflict in the Bayawa and Trinidad cases. Trinidad was allegedly the counsel for the Bayawa siblings, who were involved in a land conflict. (MVI/SunStar Philippines)