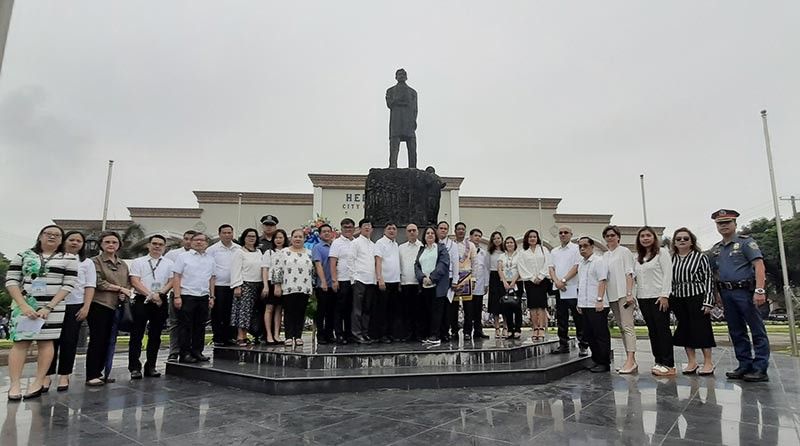 THE City of San Fernando on Tuesday, August 27, commemorated National Heroes Day through a wreath-laying ceremony held at the Heroes Hall.

City officials headed by Mayor Edwin Santiago, employees of the government and families of the heroes participated in the activity to honor the sacrifices of national and local patriots.

Among the heroes honored during the ceremony were national hero Jose Rizal, Andres Bonifacio, Ninoy Aquino and local heroes Jose Abad Santos, Tiburcio Hilario, and Nicolasa Dayrit who all have their own monuments at the Heroes Park.

In his speech read by Vice Mayor Jimmy Lazatin, Santiago said the city government continues to recognize the sacrifices made by the national heroes, to the extent of losing of their own lives, to achieve the independence experienced today as a nation.

“In this way, we also let the youth know and understand what our national and local heroes have done to get where we are today and hopefully emulate their selflessness as they make their own path in their lives,” he added.

Aside from the fallen heroes, Santiago also recognized the overseas Filipino workers (OFW), government employees, teachers and every single Fernandino whom he branded as modern heroes.

“Being a hero doesn’t mean sacrificing or risking your own life. Our OFWs who worked on foreign lands just to provide for their families, our teachers who give a part of them to their students everyday, and every Fernandino who brings pride and honor to our city and the country are also our heroes,” he said.

Lazatin, for his part, said that heroism in the modern times is equal to practicing nationalism such as obeying laws, even as simple as traffic laws, and honoring the Philippine flag wherever they are.

“Heroism in the modern times has a very broad definition but we can create our own definition by simply doing what we think is good for our country. The simple things, when combined together, makes a bigger impact to the nation,” he said.