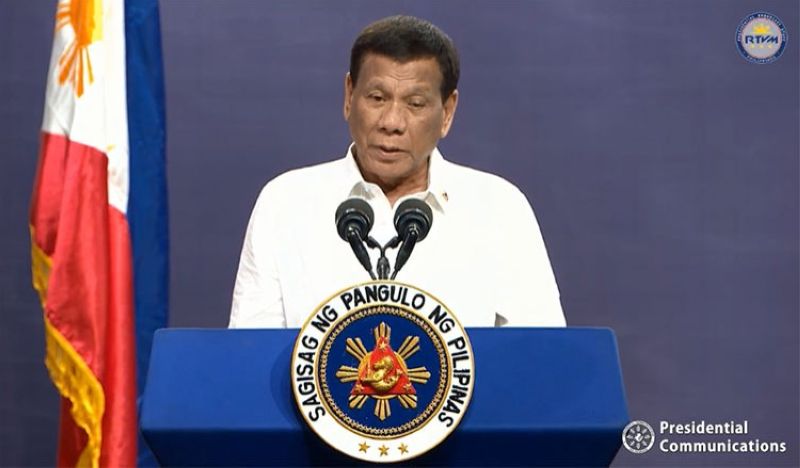 In his speech, Duterte warned that there would be a "little trouble" in the coming months as he addresses the problems that continue to plague the country.

"We cannot afford to pass it on to the next generation. Baka hindi na nila makaya (They cannot survive that). It has to be now," he said.

"And I am serving notice to everybody that in the coming months, it will be, not really bloody, but there will be at least a little trouble for our country. We have to finish it, pati droga (including the drug problem). And this will make us a magnet for all criticisms that are waiting for us to do and commit our wrong," Duterte added.

He also reiterated that he might impose a "very radical" reform in government.

The President, however, did not elaborate on his plan.

"In the coming days, there will be a very, very radical change in the behavior of the government. You know, I am not challenging you. You might win, or you may lose. But there is something to be seen," he said.

In the same speech, Duterte vowed to prioritize the farmers in his remaining years in office.

The ceremonial turnover and distribution of land titles to 100,000 beneficiaries in Conception, Tarlac and Siniloan, Laguna coincided with the 31st anniversary celebration of the Comprehensive Agrarian Reform Program at the Agrarian Reform department's main office in Quezon City.

"As we hope together in improving the quality of life of the farmers, their families and communities, I am counting to all agrarian reform beneficiaries to support growth and development of agricultural sector to responsible farmers," he said.

(You can expect that maybe this year, the Education department and the DPWH will receive the highest budget. But in my last two years, I will give higher budget to the farmers.)

Duterte's last public engagement was on August 21, when he inaugurated the hybrid solar-diesel power power plant project on Tablas Island in Romblon.

He skipped the National Heroes Day rites at the Libingan ng mga Bayani in Taguig City on Monday morning, August 26, because he was "indisposed."

However, Duterte made an unnanounced visit to the Libingan ng mga Bayani on Monday night to visit the wake of soldiers killed in Calbayog, Samar.

Earlier this month, the 74-year-old President was rumored to have been admitted to the hospital due to his frail health.

But Malacañang assured on August 17 that Duterte is "strong" and busy fulfilling his mandate as the highest official in the land. (SunStar Philippines)