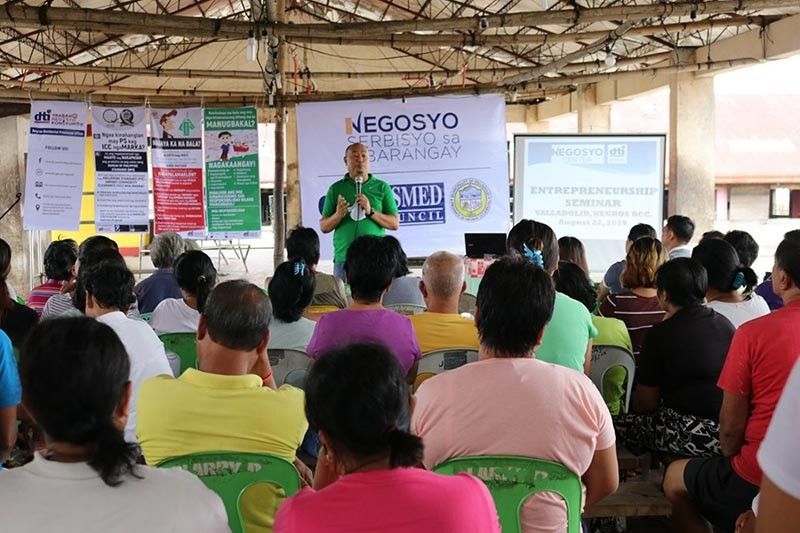 THE Department of Trade and Industry (DTI), through its “Negosyo Serbisyo sa Barangay” program, has initially benefited about 500 potential and existing entrepreneurs in Negros Occidental.

Engiemar Tupas, senior trade and industry development specialist of DTI-Negros Occidental, said the implementation of “Negosyo Serbisyo sa Barangay” is upon the directive of DTI Secretary Ramon Lopez mainly aimed at bringing the services of the agency to the countryside.

Tupas, also the focal person for Go Negosyo Center in Negros Occidental, said the program which was rolled out this year focuses on fourth to sixth class municipalities, specifically 20 percent of their respective barangays.

In Negros Occidental, the DTI targets to cover nine barangays of San Enrique, Valladolid, Salvador Benedicto and Candoni which are all fourth class municipalities.

“The mandate really is to make our services closer to the barangays,” he said, adding that they target at least 100 potential and existing entrepreneurs in every barangay of four identified towns in the province.

Since the program was implemented in July, DTI-Negros Occidental has already conducted the “Negosyo Serbisyo sa Barangay” in four barangays of San Enrique and Valladolid.

In San Enrique, the first activity was conducted in Barangay Tabao Rizal on July 24 covering 127 recipients. It was followed by Barangay Sibucao on July 25 with 131 participants.

Today, August 28, the “Negosyo Serbisyo sa Barangay” will be conducted in Barangay Ayungon still in Valladolid.

Tupas said the program has yet to be conducted in four more barangays in Salvador Benedicto and Candoni. They target to complete all nine barangays in October this year, he added.

“We have yet to identify the four other barangays because we need to coordinate first with the local chief executives,” Tupas also said.

Part of the activity is the discussion on topics like entrepreneurship and provisions of Go Negosyo Act, among others.

The DTI is also inviting other agencies like the Technical Education and Skills Development Authority (Tesda) to also present their programs and services to the people in the barangay.

For small business corporations, they are discussing their programs like the Pondo sa Pagbabago at Pag-asenso (P3) project.

Based on the initial results of the program, Tupas said they observed that most of the people in the barangays are not yet aware of the programs and services of government agencies especially the DTI.

Tupas said they expect to increase the business name registration in the province after the full implementation of the program.

“Initially, after the conduct of the activity, many of the participating entrepreneurs are asking for forms needed to register their enterprises,” he added.

Also, DTI-Negros Occidental is upbeat that the program will spur more interest among Negrenses to start or expand their businesses.

“The program actually complements the agency’s efforts to empower communities by enabling to become entrepreneurs,” its official said.