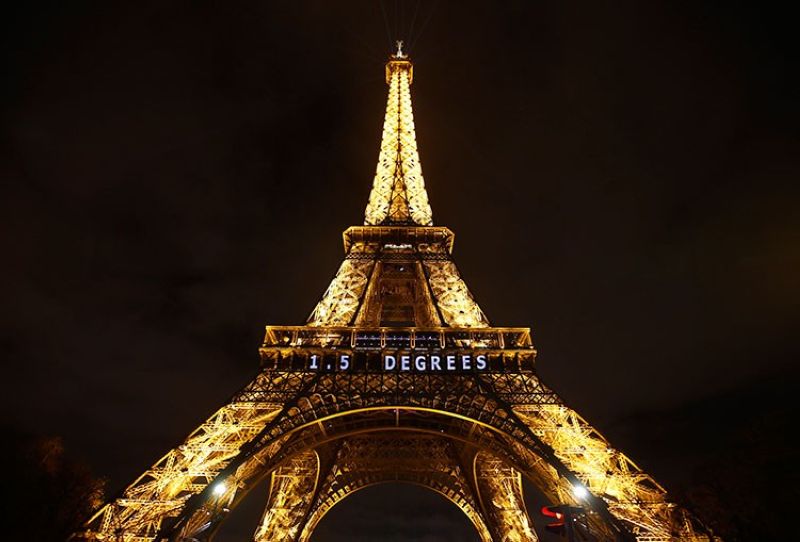 FRANCE. In this December 11, 2015, file photo, the slogan "1.5 DEGREES" is projected on the Eiffel Tower as part of the COP21, United Nations Climate Change Conference in Paris. (AP)

UNITED NATIONS -- Next month's three-day UN climate summit will highlight the urgency of taking immediate actions to reduce global warming and focus on innovations that work -- not wordy statements, the UN special envoy for the event said Tuesday.

Luis Alfonso de Alba told a news conference that the level of "political will" has faltered since the 2015 Paris climate agreement and the summit aims to spur governments, cities, the private sector and people everywhere to start scaling-up some initiatives in 2020 and "be part of the solution."

"The summit is going to be an opportunity to highlight the urgency of the situation," he said.

UN officials have said major changes are needed throughout society to achieve the most ambitious target in the 2015 Paris climate accord -- capping global warming at 1.5 degrees Celsius (2.7 Fahrenheit) by the end of the century -- and a crucial step is shifting away from fossil fuels.

De Alba said the event will begin on September 21 with a daylong Youth Climate Summit attended by between 600 and 700 people mainly aged 18 to 28 from around the world.

It will open with a dialogue between Secretary-General António Guterres and youth representatives including 16-year-old Swedish climate activist Greta Thunberg, he said, and it is expected to close with recommendations to tackle global warming.

The following day, nine coalitions led by governments, with representatives from business and civil society and young people, will present their initiatives on issues ranging from energy transition and industry transformation to climate finance, he said.

The main event, the Climate Summit, will take place on September 23, with between 200 and 250 participants, where "the very best, the most ambitious, the most transformative" initiatives that can be replicated will be presented along with concrete proposals from UN member nations, de Alba said.

He said about 100 world leaders are expected to attend, along with over 100 youth representatives. The US State Department has informed the UN that the Trump administration will participate at the summit, but did not say in what capacity, de Alba added.

President Donald Trump is the only leader to have announced his country's withdrawal from the Paris climate deal.

Guterres, who attended Monday's climate talks at the G7 meeting in Biarritz, France, said the world faces "a dramatic climate emergency." He urged leaders coming to the UN climate summit to cut greenhouse gas emissions by more than they promised in the Paris accord.

Even though Trump has pulled the US out of the agreement, Guterres said American states, cities and businesses had "the capacity to deliver in relation to climate action." (AP)