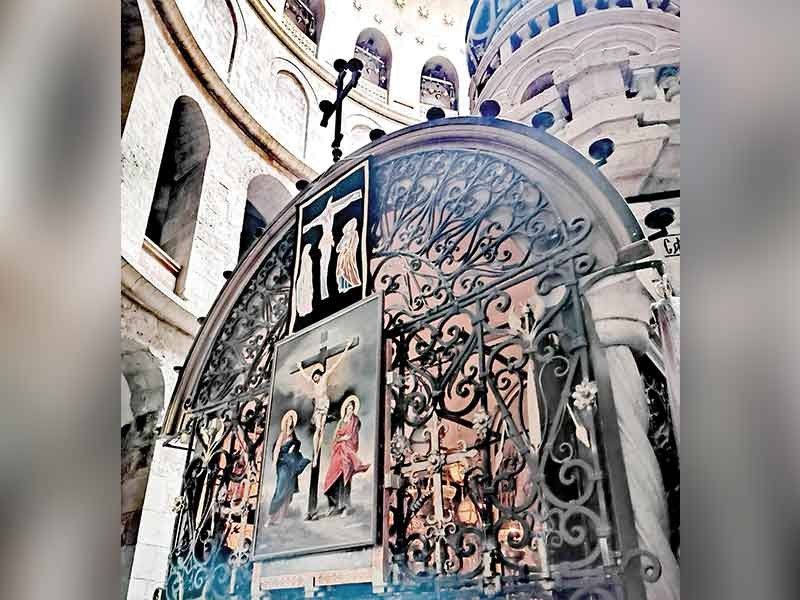 Back of Christ’s tomb. (Photo by Grace M. Avanzado) 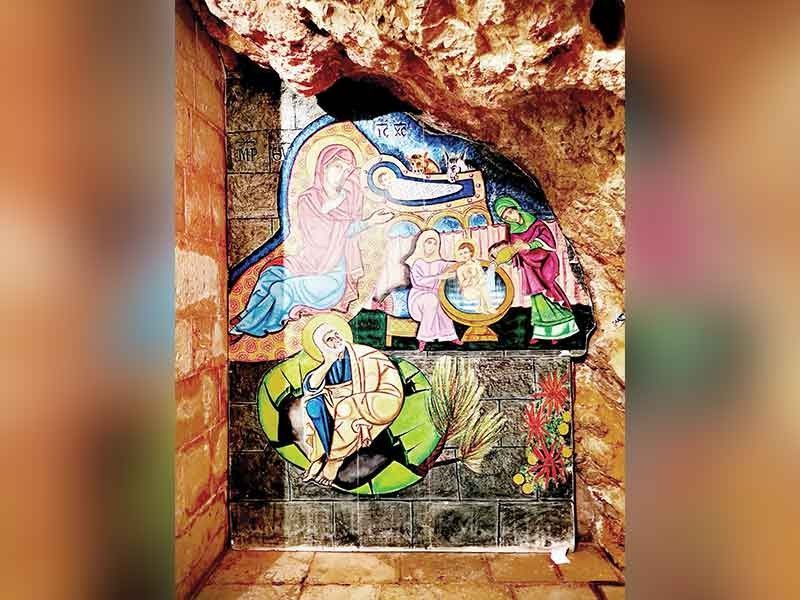 Birthplace of the Virgin Mary in the home of her parents. (Photo by Grace M. Avanzado) 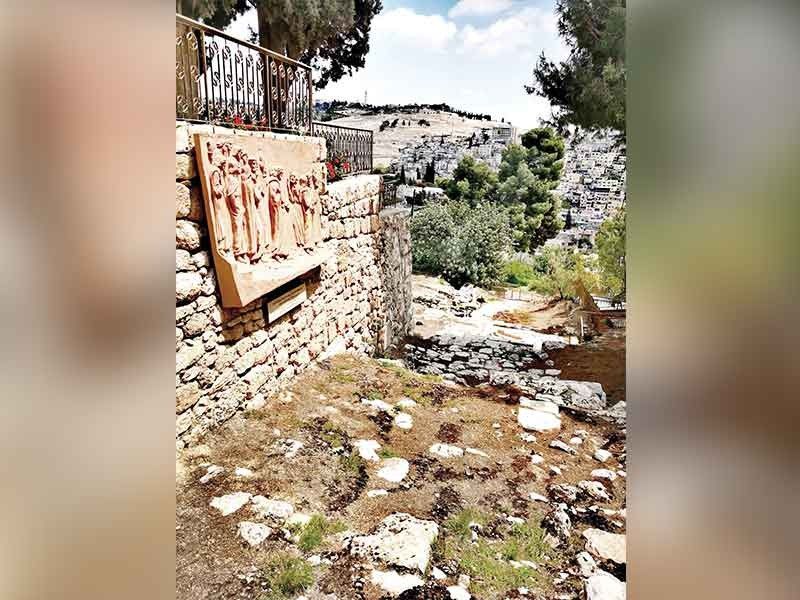 DARK JOURNEY. The road where Jesus passed on his way to being imprisoned overnight in the house of High Priest Caiaphas. (Photo by Grace M. Avanzado) 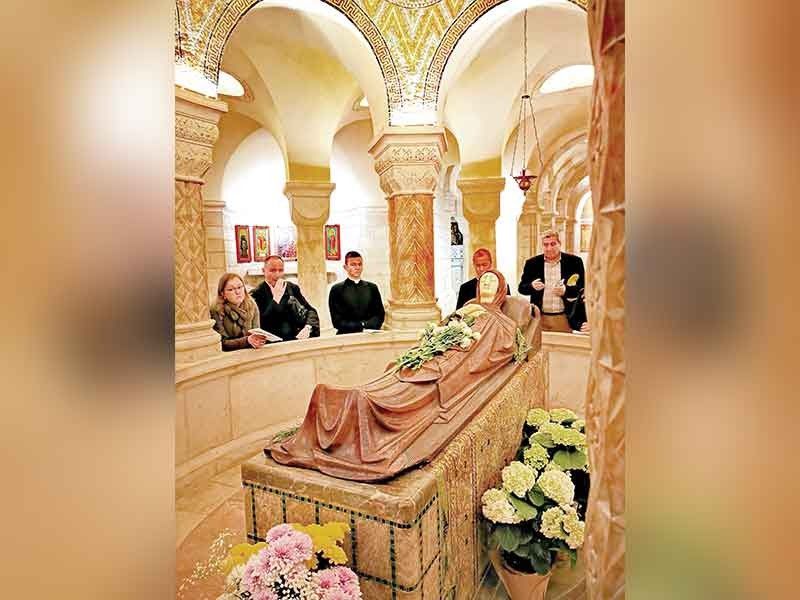 CHURCH OF THE DORMITION. Crypt below the altar with a life-sized statue of Mary fallen asleep in death. (Photo by Grace M. Avanzado) 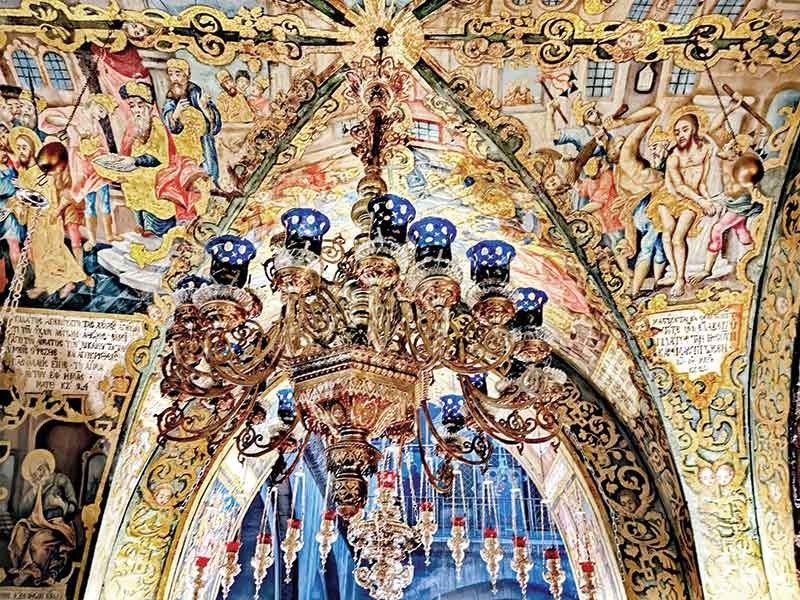 Altar at Calvary or Golgotha. (Photo by Grace M. Avanzado) 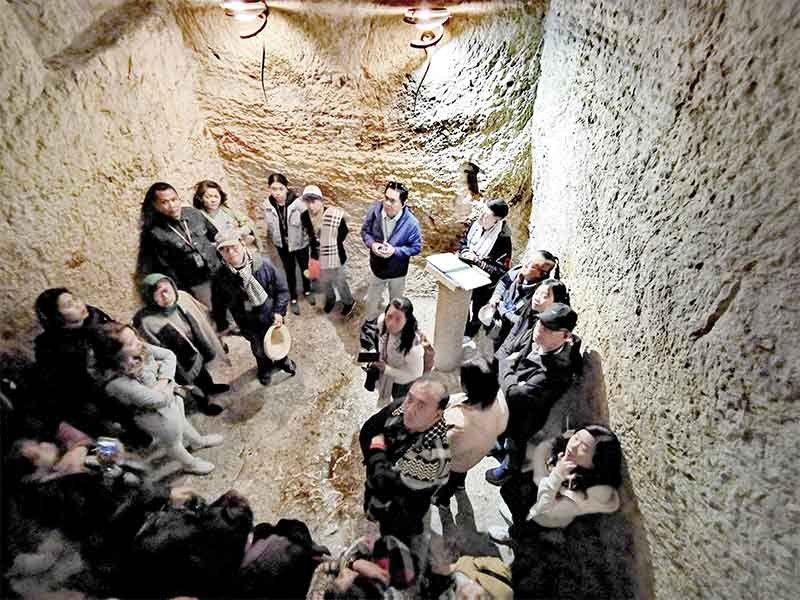 HOW DID IT FEEL? Our group in the dungeon of Christ’s prison. (Photo by Grace M. Avanzado) 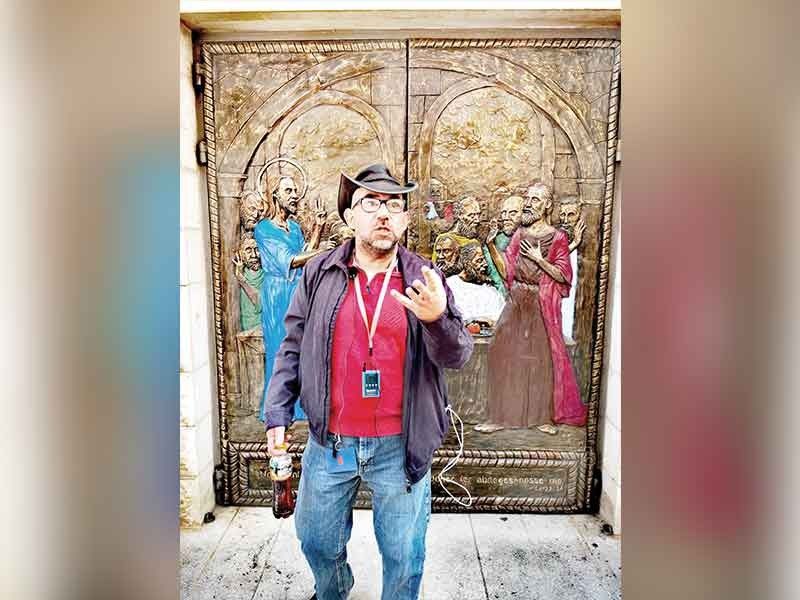 KNOCK. Our guide Taleb stands at the door of the house High Priest Caiaphas. (Photo by Grace M. Avanzado)

AFTER leaving the Mount of Olives, we arrived at Mt. Zion to see the Church of St. Peter in Gallicantu.

Built on four different levels on the site of High Priest Caiaphas’ house, it is evident that the triple denial of Peter was the inspiration for its design. We went in and went down to the dungeon – thought to be where Jesus was detained the night after his arrest. Known as Christ’s prison, the thought of what he went through after his arrest is painfully disturbing to hear.

We then proceeded to visit the Cenacle, where two major events are commemorated: The Last Supper and the Coming of the Holy Spirit at Pentecost. I asked our guide whose house it used to be and learned it was the house of Mary, the mother of Mark (the author of the Gospel chapter carrying his name).

Further down the road was the Church of the Dormition, identified by Christian tradition as the place where Virgin Mary “fell asleep” or died. Two cities – Jerusalem and Ephesus – both claim to be where Mary died, but earliest traditions all point to Jerusalem. Having been to Mary’s house in Ephesus, I remember our guide telling us that Ephesus was where she was last seen. The truth remains a mystery, but in the crypt below the altar, one can see a life-sized statue of Mary who had fallen asleep in death.

After lunch, we proceeded to the Church of St. Anne before we started our Via Dolorosa (Way of Sorrows). The best-preserved Crusader church in Jerusalem, it is the birthplace of the Virgin Mary. It is known for its remarkable acoustics which proved true as we sang O Birhen Maria with reverberating echoes. Beside the church are the Pools of Bethesda, where it is known to have been where Jesus healed a sick man.

A popular activity of any pilgrimage group, the Via Dolorosa takes one through the 14 Stations of the Cross where Jesus is believed to have passed on the way to the Crucifixion. In reality, to tread this path now is like going thru a bazaar because except for the markers in every station, everything surrounding you is for sale. The 10th to 14th stations can be found in the most visited spot by Christian pilgrims in Jerusalem, the Church of the Holy Sepulchre.

The ownership of the Church of the Holy Sepulchre is shared between the Greek Orthodox, Catholic and Armenian Orthodox churches. The rights of possession are spelt out by a decree called the Status Quo, originally imposed by the Ottoman Turks in 1757. This whole complex contains 30 plus chapels and worship places, hence the eclectic mix of architectural styles that have borne the brunt of historical events and natural disasters. On the right side near the entrance, a pilgrim must ascend a very steep, curved staircase as he or she is on the path to Calvary or Golgotha. At the top floor, one will see a Greek Orthodox Chapel on the left and a Catholic Chapel on the right. A silver disc beneath the Greek altar marks the place where it is believed the cross stood. One may touch the rock of Calvary thru a hole in the disc.

Leaving Calvary thru another steep flight of stairs will take one to the Stone of Anointing, a reddish stone slab which pilgrims kiss with great reverence. We then moved to our place in line at the rotunda to take our turn to enter the Tomb of Christ. Looking up at the massive pillars and the huge dome depicting 12 rays of light representing the apostles, I was reminded of how blessed I was to be inside Christianity’s holiest place on earth. After almost two hours, we were able to see more clearly the entrance of the little stone house flanked by huge candles. Inside this house are two chambers – the outer Chapel of the Angel is where a pedestal holds a piece of the rolling stone used to seal the Tomb, and inside, after bending thru a very low doorway, is the marble-lined tomb chamber where Jesus lay buried for three days before he rose again. One gets all of five seconds to kiss the marble slab covering the rock bench where the body of Jesus lay, but for me, it was such a powerful spiritual experience that I swore I would come back.