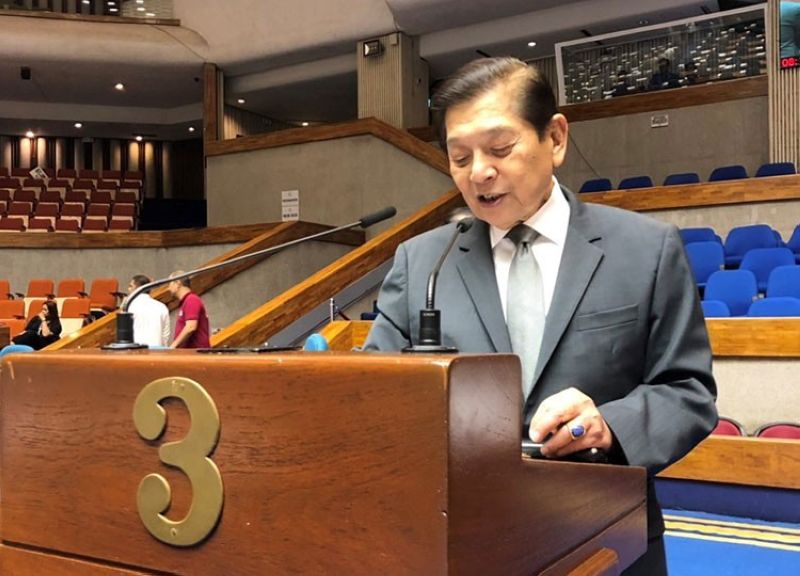 PRIVILEGE speech delivered by Representative Raul V. Del Mar on August 27, 2019 on the reported modification and alignment of the Cebu Bus Rapid Transit (BRT), which may prove to be of great detriment to the City of Cebu.

Mr. Speaker and esteemed colleagues, I rise today on a matter of personal and collective privilege.

My concern is about the burgeoning traffic problem in Metro Cebu, which must strike a familiar chord among government leaders in several urban centers of the country, especially Metro Manila.

One visibly significant effort to help reduce the traffic problem in Metro Cebu is the Cebu Bus Rapid Transit (BRT) in Cebu City. Its route and alignment have been reportedly changed and we are worried because the changes will be detrimental to the city and people of Cebu.

Cebu's local newspapers recently reported that the Department of Transportation (DOTr) has changed the alignment of the Cebu BRT. The original route for the BRT starts in Barangay Bulacao, in the southern part of Cebu City, to Barangay Talamban in the northern part, passing through the city's Central Business District. The new route, the news media reported and this has been unconradicted or corrected by higher officials, starts at the the South Road Properties (SRP) to I.T. Park (still in Cebu City).

That is a reduction in the total dedicated BRT length by almost 50 percent, from 23 km. to 13 km. The news media reports followed the site visit of the DOTr secretary in Cebu last July 6.

Mr. Speaker, the announced changes have raised a number of questions that to this day are still unanswered:

[1] What was the practical basis, the rationale, for the reported changes made by DOTr and Neda?

[2] Has the Investment Coordinating Committee (ICC) of the Neda Board approved the revision?

[3] Do Department of Finance (DOF) and Neda agree with the changes and amendments on loan agreements with the World Bank IBRD, Clean Technology Fund (CTF), and Agence Francaise de Developpement (AFD)? Has the loan agreement been officially amended already?

The primodial purpose of instituting a mass transport system in any city -- Manila, Cebu, or anywhere else in the world -- is to serve the need of people to travel, in going from home to their workplace, school or other places where they must be and coming back.

The acute problem we have in Metro Manila, dramatized by most everyone's Edsa harrowing experience, is characterized in by the very real images of commuters waking up in the dark wee hour of the morning, if only to reach on time the office, school, or place to shop, do business or socialize. And the very real images of commuters waiting for hours along roadsides in the afternoon, struggling to get a bus or jeepney return ride, or queuing in terminals, wasting valuable time which could be spent productively at home or elsewhere.

Every day, we are bombarded with horror stories of our people suffering from inadequate mobility, here in the capital, and similarly in Cebu and many other urban centers, where travel becomes a daily ordeal in waiting for the next jeepney and enduring the slow flow of cars jostling for space.

And traffic has afflicted not just the passengers, who must endure the ordeal of using public transport, but also the moneyed commuters. Even in their private cars, they also suffer, though less in the matter of comfort, from the clogging of traffic.

Mass transport will surely help. And Cebu's first attempt in mass transport is now being threatened by changes on the plan.

The ultimate goal remains the same: to provide a fast and reliable public mass transport system from the residences of the people to their places of work, study, business or leisure. It is precisely this "people-centered" philosophy which defined the original route alignment of the Cebu BRT. Mr. Speaker.

You don't know Cebu if you don't know where the people, or most of its people, live. Throngs of commuters lining up for their early morning jeepney ride are a constant and common sight in Cebu for the last 20 years, along the main highway in the south starting from Bulacao to all the neighboring residential barangays. The same dispiriting sight in Cebu City north, my district, along Banilad Road, with the horde of commuters converging from Barangay Talamban and Banilad and the other surrounding barangays.

The more livable area of Cebu City is a strip between the mountains and the sea, with more people living in the north and south but work in the Central Business District (CBD) during the day. And most of the colleges and universities are in the CBD too, which makes the same arduous journey for students. That is why the original BRT route was drawn along those corridors. There are other areas where people live -- Mabolo, Lahug, Guadalupe, and Labangon -- and these will be next in line for the progression of the transport systems. But the bulk of the problem is in the Bulacao and Talamban zones. Where the BRT is mostly needed.

It has therefore come as a shock to us when we learned that the route was cut and realigned instead to SRP then to IT-Park. True, these are economic powerhouses with advanced business establishments. But these are not residential areas and nobody commutes to and from those points early in the morning when traveling is at its peak.

One won't need much wisdom, only an understanding of Cebu, to see that trip demand from one end to the other is virtually nil in the morning because nobody lives there. In both areas.

So one is befuddled over the changes in the BRT route. Why was this new route selected in lieu of the old established route where every Cebuano knows people line up in the roadside every morning?

In fact, the only entities that benefit from this arrangement are corporations that do business in one or both sides of the new route. And these entrepreneurs want the people of Talamban and Bulacao to continue riding jeepneys and transfer to the BRT when in fact the BRT was planned to provide them continuous uninterrupted service in the first place. Something is clearly out of synch here, Mr. Speaker.

I am fully aware that this is an ODA (Official Development Assistance)-funded project, duly approved by Neda-ICC (twice!). It has three (3) existing loan agreements: with the World Bank-IBRD, the Clean Technology Fund (CTF) and the Agence Française de Développement (AFD) as well.

A Neda-approved project with loan agreements cannot be simply and unilaterally changed, Mr. Speaker, surely not without the corresponding re-evaluation and approval of ICC and Neda. I know this for a fact, because in 2017, I was the one who attended the ICC meeting which deliberated on its change of cost, when the then Cebu City mayor was out of the country.

If you may recall, Congress passed a law, RA 10752, which amended the previous Right-of-Way (ROW) Acquisition Law, making it imperative that market values are offered to landowners affected by infrastructure projects. This is a great law that we crafted, my friends, but it also meant that road-right-of-way (RROW) acquisition becomes more expensive for the government. The project cost of Cebu BRT consequently shot up from P10 billion to P16 billion. And the guidelines and procedures of the Neda-ICC necessitated another round of review and evaluation, for any change in scope and cost of projects previously approved by them. In humility, I managed to represent the city fairly well in that meeting and had the project approved for the second time.

But I know, Mr. Speaker, that changes in scope and cost necessitate a re-evaluation of Neda, of which we have not heard or read was being done for the Cebu BRT Project. It was splashed all over the news media in Cebu and yet there is no record of any ICC approval being presented or reported. Was there really an official approval?

It must be stressed, Mr. Speaker, that this representation continues to support the Cebu BRT project, and I pray the government will continue and complete it as soon as possible.

I also support all the other undertakings of the DOTr in Cebu and hope these will be implemented soon. Cebu needs all the infrastructures it can get. The city is growing faster and congestion comes with development and progress. What we need is inclusive mobility, one which addresses the needs of everybody but most especially the underprivileged ones -- the women, the elderly, children, the poor, those with disabilities, the ordinary workers -- sales women, construction workers, call center agents, everybody, manicuristas, barbers, etc. The Cebu BRT was designed for them and the other projects would immensely help, too. Which is why it is crucial that we be apprised of the truth of whatever decisions our government leaders make.

For those reasons and related concerns, Mr. Speaker, I therefore earnestly request for the approval of the following recommendations:

[1] For the Committee on Transportation to call for a hearing and invite the Department of Transportation (DOTr) and the National Economic and Development Authority (Neda) to shed light and present the rationale for the decision of DOTr to cut the route alignment of the Cebu BRT from 23 km. To 13 km. of dedicated lanes, which could disenfranchise thousands of residents in the Bulacao and Talamban cluster of barangays from having direct access to the city center;

[2] For the Committee on Transportation to inquire from the Investment Coordinating Committee (ICC) of Neda Board whether or not the ICC has already approved the revision of the scope and cost of the Cebu BRT as announced in Cebu;

[3] For the Committee on Transportation to inquire from the Department of Finance (DOF) and Neda whether or not they agree with the changes and corresponding amendments of the loan agreements with World Bank-IBRD, the Clean Technology Fund (CTF) and the Agence Française de Développement (AFD), and whether these loan agreement have already been amended; and

[4] In case the changes have not been finalized, for the Committee on Transportation, to ask DOTr to reconsider its decision and implement the Cebu BRT as originally designed and approved.

[5] On the related problem of traffic and the need for complementary measures to the Cebu BRT, for the Committee on Transportation to appeal to DOTr to implement the Bill for the construction of LRT or MRT or Monorail or such other appropriate mass transport system in Cebu City and Metro Cebu filed and re-filed by this Representation since the Eighth Congress up to the present 18th Congress as well as the Bills for the construction of a Subway under and a Skyway over the three most congested road sections in Cebu City North District filed this 18th Congress.

Let us all help improve the lives of our people the most effective and efficient way we can.