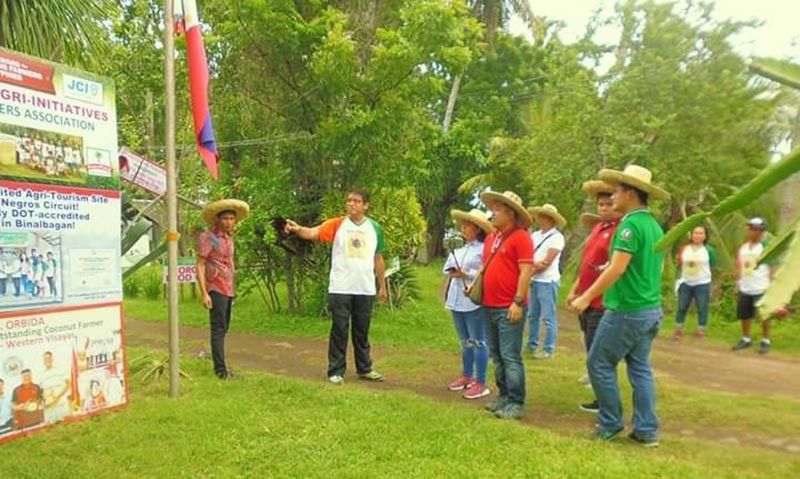 NEGROS. National finalist Jesus Antonio Orbida (second from left) with the members of the National Technical Committee for the National Organic Agriculture Achievers Award (NOAAA) have conducted the field validation at the PeacePond at Barangay Enclaro in Binalbagan town on Tuesday, August 27, 2019. (Contributed Photo)

MEMBERS of the National Technical Committee for the National Organic Agriculture Achievers Award (NOAAA) have conducted the field validation for Negrense Jesus Antonio Orbida, who is one of the three finalists in the small farmer (individual) category.

The team, along with representatives from the Department of Agriculture (DA) Western Visayas and Provincial Government of Negros Occidental, evaluated Orbida in his farm at Barangay Enclaro in Binalbagan town on Tuesday, August 27.

The multi-awarded integrated and organic farmer told SunStar Bacolod that the technical committee validated if, indeed, he is practicing the organic farming system in accordance with the law.

“They checked our record keeping as well as the original copies of the certification,” he said, adding that the team also interviewed him of the whole system including the marketing and selling of their virgin coconut oil (VCO) and cocosugar outside the country.

The NOAAA is an annual competition of the DA that recognizes organic agriculture development initiatives in the country.

Prior to the national awarding rites in Cavite sometime in November this year, Orbida will be receiving first the award for the same category in the 2019 Regional Organic Agriculture Achievers Awards (ROAAA) in Iloilo City on September 17.

“The honor is also for the province and Binalbagan,” he said, adding that this is the first time that the town is vying for any national award on organic agriculture.

Being the only DOT-accredited tourism establishment in Binalbagan, it practices agroforestry by intercropping other farm produce between coconut trees.

Recently, they also launched The Blastik or the Balik Plastic Bottle Project, which is a full-circle plastic bottle collection and recycling program.

It hopes to teach public and private sector groups on how to lessen the plastic footprint among communities.

During the validation, Orbida underscored that his farming practices involve sharing to the community and uplifting other people’s lives.

Through their association, they involve people in the community to work as partners and in equal sharing.

“They have no investment, only time and effort,” he said, adding that “farmer-members also have no membership fee or dues for the association but they earn money through our farm projects.”

Meanwhile, prior to the field validation, the team paid a visit to Governor Eugenio Jose Lacson at the Provincial Capitol in Bacolod City.