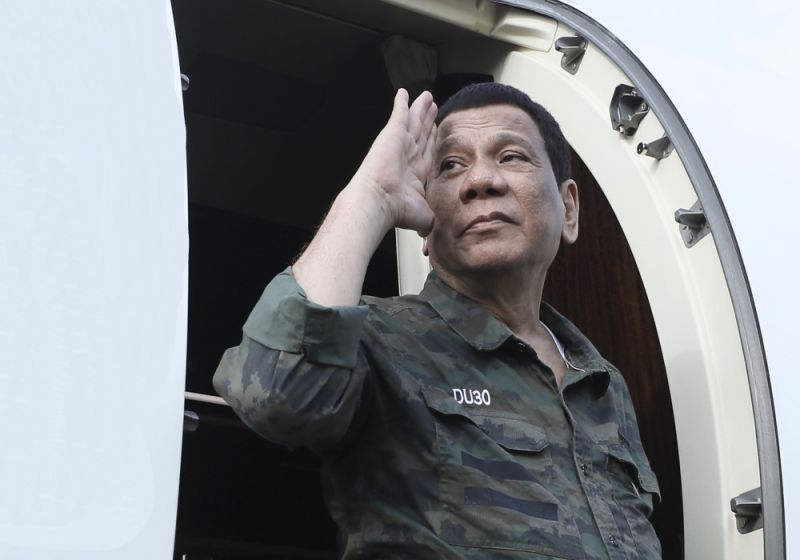 Duterte left Manila at around 6:54 p.m. for a five-day official visit in Beijing.

His official visit to China will be his fifth trip to the Asian economic powerhouse since he was elected president in 2016.

The President’s latest visit will serve as his opportunity to finally invoke the Manila’s landmark win before the Hague-based Permanent Court of Arbitration, which invalidated Beijing’s sweeping claims to the hotly-contested South China Sea.

On July 12, 2016, the arbitral court ruled that China has no legal basis to claim nearly 90 percent of the resource-rich South China Sea.

Duterte, in a speech delivered on August 21, pledged to assert the arbitral ruling on the busy waterway, whether China “likes it or not.”

In a statement, Presidential Spokesperson Salvador Panelo said Duterte would tackle with Xi the ways to ensure the immediate conclusion of the crafting a legally and binding code of conduct (COC) in the South China Sea.

He added that the conduct and framework of a possible joint exploration between the Philippines and China in the West Philippine Sea would also be discussed by the two leaders.

“President Duterte is expected to raise during his bilateral talk with President Xi the ruling held by the Permanent Court of Arbitration in The Hague which disapproved the expansive claims of China over the disputed waters in relation to the exclusive economic zone of the country in the West Philippine Sea,” he said.

“The President believes that the absence of the COC that is to be observed by affected countries has caused numerous conflicts in the subject waters that could have been prevented by a document that will regulate their actions. A good example of such conflict would be the maritime incident which transpired a few months ago in Recto Bank,” Panelo added.

Duterte’s departure in the country also came the same day after the owner of Chinese vessel that hit Filipino fishing boat Gem-Vir1 in the Recto Bank on June 9 already issued an apology.

“In relation to this, we accept the recent apology extended by the owner of the Chinese vessel to our fishermen affected by the incident,” Panelo said.

“We likewise welcome the owner’s humility to take responsibility and acknowledgment that compensation must be provided to cover the actual loss,” he added.

Apart from the sea ruling, Duterte is also expected to tackle with Xi the two nations’ accomplishments and shared goals under the Comprehensive Strategic Cooperation.

His visit to Beijing is also expected to yield a “number” of cooperative bilateral documents and memoranda of understanding that are aimed at “further increasing the breadth and depth of cooperation between the Philippines and China.

“The two leaders would likewise exchange views on issues important to their nations’ interests, such as fast-tracking the existing big-ticket projects of China in the Philippines, as well as improving our trade relations,” Panelo said.

“President Duterte and President Xi would further witness the signing of cooperative bilateral documents and memoranda of understanding which are aimed at strengthening ties, deepening friendship and enhancing diplomacy of both countries,” he added. (SunStar Philippines)