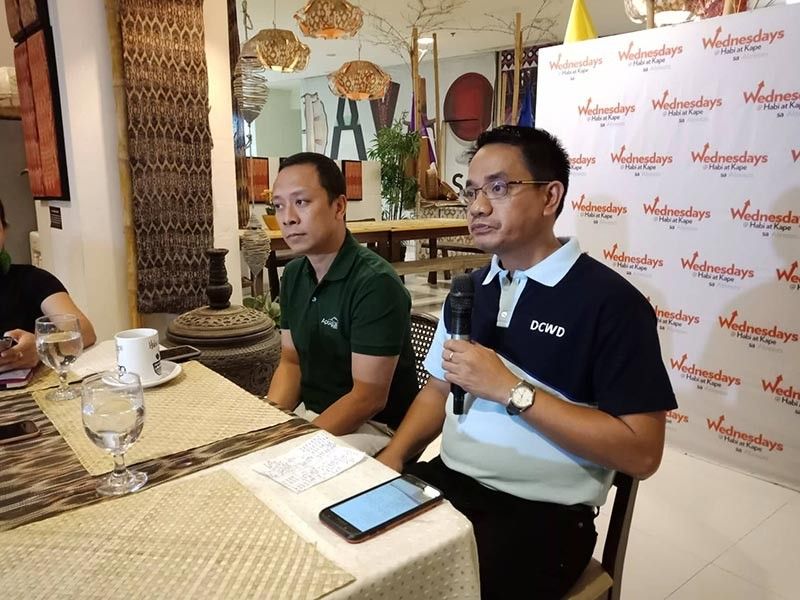 DAVAO. The Davao City Water District Human Resource Department manager and spokesperson Bernardo D. Delima Jr. (right) reiterated the need to increase water rates next year in order to cover the deficit in their revenue collection and further improve its connection services in the 112 barangays in the city. (Lyka Amethyst H. Casamayor)

THE Davao City Water District (DCWD) reiterated the need to increase water rates next year in order to cover the deficit in its revenue collection and further improve its connection services in the 112 barangays in the city.

DCWD Human Resource Department manager and spokesperson Bernardo D. Delima Jr. said on the sidelines of Habi at Kape media forum at the Abreeza Ayala Mall Wednesday, August 28, that DCWD has submitted a proposal of a maximum of 60 percent increase to the Local Water Utilities Administration (LWUA) on top of the current minimum rate of P137.30 for the first 10 cubic meters of monthly consumption or around P32 to P33 additional to the minimum rate.

Delima said 12 percent of the 121,000 service connections in the city are consuming an average of less than 10 cubic meters or 10,000 liters a day.

"Ang implementation scheme namin, assuming that it will be approved, we will not be implementing it fully in the same year. We will be implementing it in tranches like on the first year will be adding 30 percent and then 20 and 10 percent for the following years," he said in vernacular.

"The last time we had a water increase was in 2005, that is 14 years ago and that was implemented in tranches. DCWD does not get subsidy from the national or local government, we generate our own money," he added.

Delima said they always base their budget for the next year from their revenues. In 2020, DCWD already projected a cash deficit of P1.3 billion if water rates hike remains unimplemented.

Delima said they will not even consider getting a loan just to improve their water service connections because of the high interest.

Meanwhile, he said they are now waiting for LWUA to call for a public hearing wherein they already anticipated oppositions from the consumers.

On Tuesday, August 27, Councilor Danilo Dayanghirang aired his frustration to DCWD for failing to take action on the inconveniences his constituents suffer due to poor water service.

Dayanghirang also proposed to recall the franchise of DCWD by the Congress or by the National Water Resources Board.

The councilor also said that recalling their franchise would allow other potential investors to provide water service in the city. (With reports from Ralph Lawrence G. Llemit)